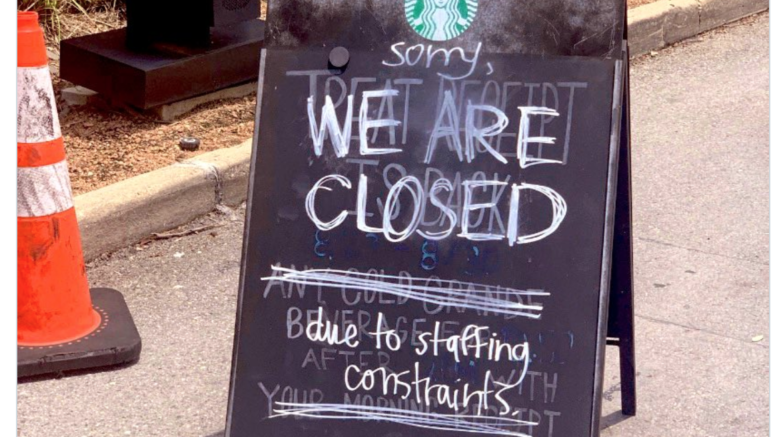 Greetings from the Burgh, where it’s a gorgeous 90-degree day!

In Los Angeles, hundreds of nurses have gone on strike at Keck Hospital of USC and the USC Norris Comprehensive Cancer Center.

“We don’t want to strike, but our patients’ safety is jeopardized by chronic short staffing and the hospital’s excessive reliance on outside contractors without the appropriate skill mix to provide safe care,” USC nurse Joshua Duarte said in a statement.

Several Starbucks Close Across Nation Due to Poor Staffing

In our search of Twitter this morning, we discovered multiple comments from customers across the country frustrated that their neighborhood Starbucks is closed. We found customers in Jonesboro, Arkansas,  Honolulu, New Orleans, and Austin complaining of nearby Starbucks stores being suddenly closed as nationwide retailers complain of struggling to find workers to fill low-wage retail worker jobs.

After seeing a sign informing that a Starbucks was closed due to staffing concerns, one customer in the Austin neighborhood of Rockwood tweeted: “#LovetoSeeIt, but also, I need my espresso.”

If a retail outlet is closed near you, please send us a photo of the closing with the location of the store at [email protected].

Recently, Payday’s Strike Tracker has been having issues because there are over 1,400 strikes on it and our website was not designed to handle a map with so many links to various strikes on it. (Check out our piece produced in conjunction with the Center for Economic and Policy Research and the Institute for New Economic Thinking.)

To make the Strike Tracker load faster, we need to change servers. It’s a complex process that will require us to hire an outside web developer.

Donate today so we can upgrade the Strike Tracker and keep tracking the “Retail Worker Rebellion.”

Sign up to become one of our more than 600 recurring donors today so we can fundraise less and become more sustainable.

Award-winning NYT journalist Nikole Hannah-Jones recently decided to take a tenure-track job at Howard University after the University of North Carolina controversially denied her tenure as the Knight Chair in Race and Investigative Reporting at North Carolina.

However, adjuncts at Howard have brought up Hannah-Jones’ offer of tenure to draw attention to how so many non-tenured faculty are never given the opportunity to even seek tenure at Howard.

In the three years after they successfully voted to unionize, Howard University has resisted efforts to bargain a fair union contract with its adjunct union.

“Three years ago, the full-time faculty who work in positions not subject to tenure, organized and voted to create a Union that covers a membership roster of less than 150 professors,” wrote Imani Light, an adjunct professor at Howard. “And in the three years since that ratifying vote passed, Howard University has rivaled the likes of Amazon and Wal-Mart in their efforts to first block and then break the Union of non-tenure-track faculty.”

As a result, some lawmakers and unions are now pushing Massachusetts to repeal their ban on public employees striking.

“It’s not fair to turn to a public educator or a firefighter and say to that worker they shouldn’t be afforded the same fundamental rights in the workplace as all workers,” State Rep. Mike Connolly told WWLP.

For more, check out WWLP.

Finally, one of my favorite beer companies, Great Lakes, has decided to unionize.

“Yes this is about giving us a voice, but we also feel that a union would be good for [Great Lakes’] business,” one member of the Great Lakes Organizing Committee told the Cleveland Scene. “People are going to love buying union-made craft beer in Cleveland.”

For more, check out the Cleveland Scene.

Be the first to comment on "Starbucks Nationwide Closed Due to Staffing Issues – USC Nurses Strike – Howard Univ. Union Activists Speak Out"