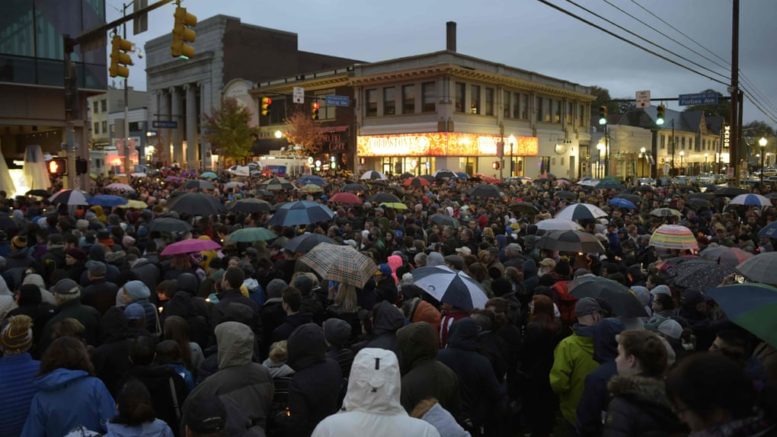 Writing a dispatch for the Guardian, Mike Elk looks at Squirrel Hill, a neighborhood, where he grew up:

“We gotta make this moment about how to organize people,” said Smalls, a Greek American who grew up in the neighborhood and is married to a Jewish woman. “I don’t think this is a leftwing or rightwing thing. I think it’s about the gap between the rich and poor is getting wider and wider and people are pissed and looking for people to point the finger at.”

Small’s neighbor Judy Chang, whose kids attend school with his kids, called across the street. She came to give him a hug.

“The neighborhood is really close-knit and when you live here, you go to the same restaurant and the same stores and everybody gets to know one another, everybody knows who their kids are,” said Chang, a Californian who moved here 17 years ago.

She struggled to hold back tears. “Knowing how this is impacting the whole neighborhood, I just wanted to go by and see if everybody was OK,” she said.

https://www.theguardian.com/us-news/2018/oct/27/pittsburgh-shooting-squirrel-hill-mr-rogers-neighborhoodFor more, go to the Guardian.

Be the first to comment on "Squirrel Hill: Mr Rogers’ neighborhood comes together to mourn"