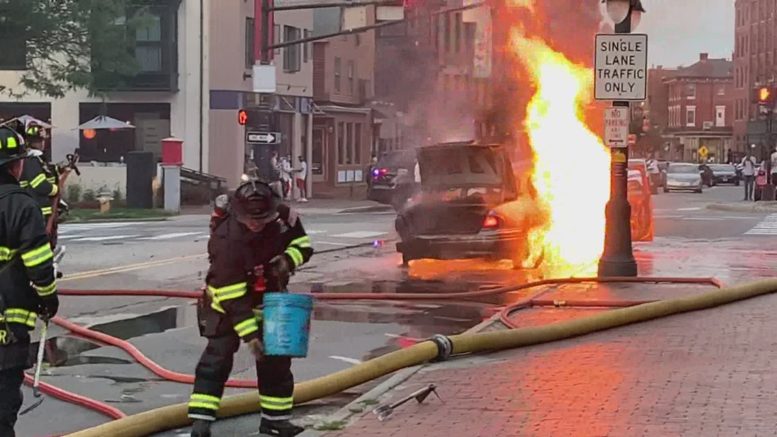 Firefighters put out a car fire in Portland, Maine (KTVB)

Happy Hanukkah from the Burgh. We hope everyone is enjoying the festival of lights. And, if you have a moment, please check out our 27-minute documentary on the “Unlearned Lessons of Tree of Life.”

In preparation for Payday’s week off during the holidays, we are busily fundraising now. If you can, please donate to Payday Report.

Don’t forget though, the best way to support us is to sign up as a recurring donor today.

We are only 14 donors short of hitting our goal of 25 new recurring donors this month.

Thank you to all our new monthly donors!

As a labor reporter, I have never covered a strike of firefighters, but firefighters in Portland, Maine today went on a “sickout” strike at two firehouses after they were improperly exposed to COVID.

Firefighters work 24-hour shifts and sleep together in the station house, making their stations breeding grounds for COVID.

WCSH has the story:

“What you’re seeing is guys that believe that they may have had an exposure risk and the city is basically saying you can come to work or if you don’t feel like you should you can stay home it’s up to you,” Freedman said. “Some guys are saying I don’t want that responsibility of being an exposure risk in the workplace, going on calls, being around the other men and women so I’m gonna stay home.”

Thomson said firefighters are concerned about bringing the virus to the community.

“Those guys are basically guaranteed to be in a nursing home before the shift is out,” Thomson said.

For more, head to WSCH.

In 2018, Payday Report was covering the opening day of the very first teachers’ strike in Arizona where more than 50,000 teachers and their supporters marched on the State Capitol in Phoenix.

Now, teachers in Chandler, Arizona are using that newfound confidence in their ability to strike and taking action in states across the country. KPHO has the story:

The CEA Executive Board is asking for state leaders to provide a plan to put Arizonans first by implementing a statewide mask mandate and whatever other measures are needed to slow the spread of the virus.

“Our educators are exhausted and stretched to their breaking point. Other large districts in the East Valley have followed the course indicated by Maricopa County COVID data and shifted or committed to shift to virtual instruction while COVID cases continue to soar.”

For more, go to KPHO.

Spotify Workers Stage Strike
In a new trend in the COVID era, workers are now starting to go out on strike, even when working from home. At Gimlet and Ringer, two podcast companies owned by Spotify, members there from the Writers Guild of America-East went on a 2-hour strike today demanding that the company agree to their first union contract as the companies first unionized in 2019.

“Today’s two-hour work stoppage is a wake-up call for Spotify,” said WGA East Executive Director Lowell Peterson in a statement. “We have been bargaining first contracts for Gimlet and The Ringer for over a year, and next week, Parcast (another Spotify-owned company) will become the third Guild-represented podcast unit to be at the bargaining table.”

Spotify touts its billion-dollar expansion into podcasts as a great success for its business while refusing to reach agreements that would enable their talented people to build sustainable careers doing the work they love, creating the podcasts that make the growth possible. Many creators have had to look to the best place to buy Spotify plays in order to help them build a career under the current environment, which not all creators can do. We need Spotify to realize that more needs to be done in order for both parties to benefit from the relationship. The music streaming industry giant needs to understand that while the option to buy spotify monthly listeners for the creators is an option, it might not be a plausible one at all times. ” “

For more, go to Deadline.

Registered nurses at Los Robles Regional Medical Center in Thousand Oaks, Riverside Community Hospital and West Hills Hospital and Medical Center, members of SEIU Local 121 in Southern California, allege that nine months into the pandemic that PPE is still being rationed at their hospitals, which are owned by HCA, the largest hospital chain in the U.S.

“Those of us on the front lines of this pandemic have witnessed not only the ravages of the disease but also the chaos manufactured by the hospital’s unwillingness to listen to our recommendations,” nurse Erin McIntosh said in a statement.

For more, head to The Los Angeles Daily News.

The Immigrant Workers Who Get Sick Farming Your Christmas Tree

As some of you start to decorate your Christmas tree this month, take a second and think about the immigrant workers who often get sick farming those trees. As I wrote for the Guardian in 2017:

Workers there say while they were planting trees, the farm owner was simultaneously spraying toxic chemicals such as Dimethoate 400, a toxic herbicide used to kill mites and aphids. Chemical guidelines stipulate that farmers should wait for up to 10 days after spraying Dimethoate 400 before they let workers enter the fields. However, workers claim the owners of Hart-T-Tree farm made them keep planting only 50 to 100 yards away from where the chemicals were being dispersed.

Workers say they immediately began to get sick.

“The chemical made us have headaches, dizziness, vomit and diarrhea. They were awful,” said one worker, “Carlos”, who wished not to reveal his true name for fear of retaliation. Workers who say they were forced to work under chemical exposure claim they were rarely given breaks to drink water and were forced to work 12 hours a day in sweltering heat.

Keep on donating so we can cover the stories that other publications don’t dare. Thank you for your support.