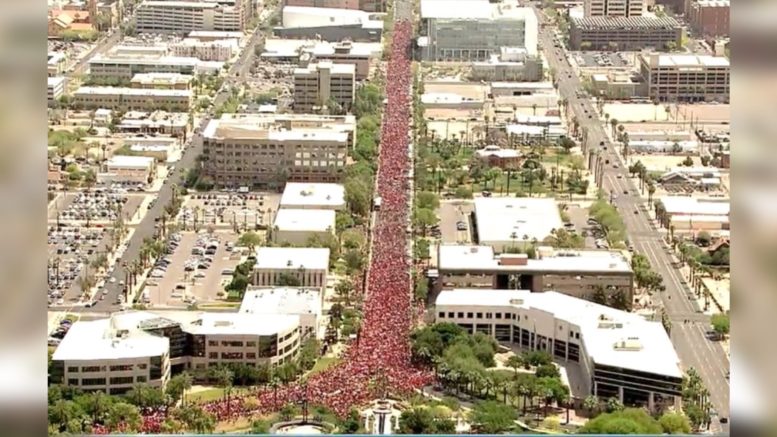 PHOENIX – For miles around, tens of thousands of people desperately searched for parking as they made their way to Chase Field, home of the Arizona Diamondbacks, to begin their march on the Arizona State Capitol.

Over 50,000 showed up according to the AP, crowds nearly five times those seen on the first day of the Oklahoma or West Virginia strikes and far more diverse.

The marchers represented a cross-section of all age groups, all races, some carrying instruments, some driving wheelchairs, others clutching wagons of cold water. While they came in a variety of different shapes and sizes, they all came wearing red.

“I’ve been a political activist for 30 years and I have never seen a moment like it,” said Dwight Metzger, whose print shop Gloo Factory, represented by CWA Local 7026, has sold over 30,000 pieces of #RedforEd paraphernalia.

As I struggled to find the beginning of the nearly 20 block march, a group of indigenous school children and educators marched to the tune of drums played by their elders in the Temachtianimeh Education Alliance

“It’s historic, unprecedented, we have people from all walks of life,” said Rafael Reyes as he blew into a giant flute-like seashell.

The band keeps marching, merging into a crowd of black, white, brown as the sun beat down. Temperatures would climb to 100 degrees Fahrenheit by the end of the day.

“I lost my kids, I have been having so much fun,” said second-grade teacher Maybely Munoz as we laugh and help each other apply sunblock at the side of the march.

An immigrant from Guatemala, she’s a 27 year veteran of the classroom in Phoenix, where she teaches at a low-income federal Title 1 school in McDowell that her daughter attends.

“Most of us public school teachers have our kids in the same schools where we teach because we believe in public education,” said Munoz. “I adore my kids!”

However, she said she was deeply concerned about how Arizona Governor Doug Ducey’s proposed budget, which would raise teachers salaries by 20% without raising taxes, would be paid for by cutting programs designed to help the poor as well to help Spanish speakers and disabled speakers learn English. This could be due to the reason that non-native speakers tend to have a hard time learning a new language. However, one with an interest in learning can look for resources that can help them learn English in the United States.

Coming back o Munoz, she added, “It’s not Latino kids who get help, it’s disabled kids as well,”. “It’s not fair.”

With the state experiencing a shortfall of 2,000 teachers, dual language schools face long wait lists from immigrant families hopeful to get their children admitted to bilingual schools.

The state has a shortage of Spanish-speaking educators in their schools because many capable undocumented immigrants are unable to gain the necessary paperwork to go to college. Due to low pay and poor condition, many of the state’s credentialed Spanish speakers leave the state looking for higher paying jobs elsewhere.

Munoz said she prepared to stay out on the picket line for as long as it takes even if it means she has to teach summer school for free to make up for the lost days. She said that she won’t accept Governor Ducey’s deal to give teachers a raise if it means cuts to social services for the poor, latino, and disabled.

“They can’t divide us,” said Munoz.

Standing a few blocks away is Andrea Melendez holding a sign saying that she is her son’s special education teacher. Her son is 7 years old, autistic, and struggles with speech issues. He is finishing his last year in a special autistic self-contained class, but Melendez worries about her 7 year old autistic child going into a classroom with 33 elementary students.

After several years in special classes and making progress on his speech, Melendez’s son is gradually integrating into general education classes.

“He is doing so well that he can integrate into general education, but he’s got 33 kids in that class after coming from a class of only 8,” said Melendez. “In a class of 33, they have nothing in the way of support.”

For many striking teachers – black, white, and brown – they are participating because of the positive role that public education has played integrating people from diverse backgrounds.

“For me, just like many of the students who attend my school district, school was the only safe place in my life,” said Phoenix elementary school teacher Alexis Aguirre, who grew up the daughter of drug addicts in an immigrant family, often bouncing in and out of underfunded foster care settings.

The first in her family to graduate from either or high school or college, Aguirre said that she is on strike so that schools will remain a place of opportunity for immigrant children like herself.

Nearly 45% of Arizona’s public school students are Latino, the largest group in a majority-minority school system. For many teachers, the experiences of immigrants, many of whom filled the streets, weighed heavily in their hearts.

“I wouldn’t feel okay knowing that I haven’t been doing my best for them because I know their parents work two or three jobs. I know their parents have crossed the desert and risked their own lives,” said Phoenix elementary school teacher Alexis Aguirre. “They come here to the United States and send their kids to our schools with the expectation that we are going do right by them. We owe it to them.”

For generations, the Latino educators and their supporters have sued and sometimes won suits claiming racially discriminatory funding of school districts in minority communities, but today they have found many new allies.

“It was just so festive all day,” said Jesse Chavez, a croissant vendor, whose said his group sold or donated over 1,500 croissants in varieties such as spinach, pepperoni, and vegan.

“All day, it was just a sea of red,” said Chavez as we broke bread together at the end of a historic day in Arizona history.

Be the first to comment on "As 50,000 March on Arizona Capitol, the Disabled, Latinos, and Teachers Say They Can’t Be Divided"