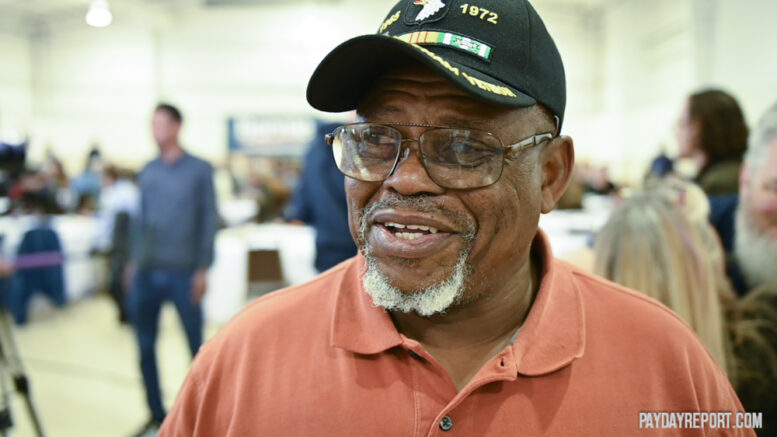 African-American Vietnam Veteran Richard Field says he regrets voting for Hillary in 2016 and is feeling the Bern now.

ST.GEORGE, SOUTH CAROLINA – 69-year-old African American Vietnam Veteran Richard Field saunters up to the buffet table packed with bacon, fried catfish, eggs, and grits for a Breakfast with Bernie in the back of the historic Shady Grove United Methodist Church Family Center.

In the primary in 2016, Field voted for Hillary, but this time around, he is feeling the Bern!

“Its time for him to do his thang,” says the glasses-trimmed Field as a bright smile brims from emerging underneath the tough interior of his 101st Airbone ballcap.

Field says Medicare-for-all was a crucial issue in getting him on board with Sanders.

“I got some alcoholic brothers that can’t control themselves because of the disease that they got,” says Field. “Those are people that need it the most that can’t help themselves whether they got a disease or are disabled.”

Field regrets that he didn’t support Bernie in 2016 and says that he’s evolved to like Bernie. He says what persuaded him to get behind Bernie is the Senator’s unflinching devotions to his beliefs.

“Bernie, don’t change. He says the same thing over and over again. He’s committed to that,” says Field. He says that many older African-Americans like him are beginning to change their position the more that they learn about Bernie’s consistent track record for 40 years.

“You got some people that say one thing; then they might get some feedback loop somewhere else…ok, I’ll change my position. Not him, not him. We found that out,” says Field.

“My position changed a whole lot,” says the African-American Vietnam Vet, “but when you are looking for a leader, you’re looking for someone to be steadfast not like me.”

Field is one of many African-Americans in South Carolina, who didn’t back Bernie in 2016, who in 2020 are finding themselves feeling a part of Bernie’s growing coalition.

Terry Miller is a 48-year old tile cleaner that is at his first-ever campaign event. As I explain to him what I do as a labor reporter, he takes out his iPhone to show me photos of floor finishing he does at nearby Targets.

Miller says he’s frustrated by big multinationals like Volvo, who move into Dorchester Counter. The Sweedish multinational recently opened a plant in that area, employing nearly 4,000 people in the area. But Terry says that despite the Swedish automakers’ progressive reputation that it falls to hire qualified African-Americans from the local community.

“Instead of hiring local folks, they are bringing in folks from out-of-state when you have qualified people right here in their community,” says Miller.

Terry says he was hesitant about Bernie, but the more he talked to younger folks, the more he got interested in Berne.

“I see the younger generation and where it’s going, and it makes me more enthusiastic about Bernie,” says the 48-year-old.

Terry says that he was undecided, so he took the day off on Friday so he could get a closer look for himself at the candidates. On Friday, he said he was going to attend Bernie’s event as well as a game with billionaire Tom Steyer a few miles away later in the afternoon.

Fifteen minutes into the Senator’s speech, Terry starts feeling the Bern when Sanders talks about the need to raise wages to a liveable level. Terry yells out that they gotta raise wages to “at least $15 an hour”.

Sanders then laments the situation of teachers making far too low.

“Teachers are taking money out of their own pockets because supplies are so bad,” says Sanders as he begins to talk about how teachers are talking two jobs to make ends meet.

Suddenly, Sanders is interrupted by a teacher, who tells Bernie that she works 4 jobs. Bernie askes what jobs she works and she describes working as a teacher at two different places, a barista, and as an Uber driver.

“What you just described is a national disgrace,” says Sanders.

The crowd begins to cheer, and on this day, it seems like Sanders and this group of workers have connected on the level. At the very least, workers feel like Bernie was finally able to listen to them. On an individual, everybody is weak under a current system, but increasingly finding their power in groups.

“What we need is a strong grassroots sentiment to change this country,” says Sanders.

Donate to Help Us Continue to Cover Bernie in the South