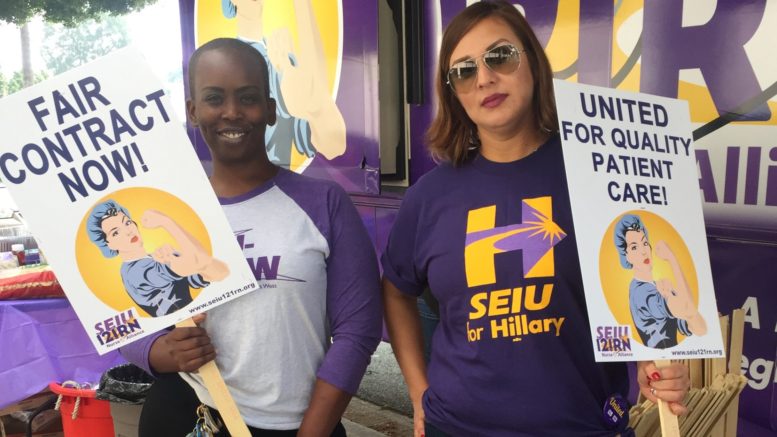 Last week, Payday Report ran an exclusive interview with Njoke Woods describing retaliation that she faced when she tried to confront a culture of sexual misconduct and favoritism within SEIU-United Healthcare Workers (SEIU-UHW).

SEIU-UHW is currently facing a lawsuit filed by a current staffer Mindy Sturges, which alleges sexual misconduct and favoritism at SEIU-UHW.

The interview corroborated allegations made in a lawsuit filed by Mindy Sturges against SEIU-United Healthcare Workers and SEIU Vice President Dave Regan; claims which SEIU-UHW has repeatedly denied.

The firing comes less than 24 hours after Woods was interrogated by SEIU Chief of Staff Greg Pullman about her interview with Payday Report.
In documents obtained by Payday Report, her interview was repeatedly cited in writing by SEIU-UHW management as one of the primary motivating factors for her termination from union staff today.

In a memo outlining her reasons for termination, SEIU-UHW Chief of Staff Greg Pullman cited Woods for recording a supervisor without permission. As well, Pullman claimed that Woods performed poorly during a successful effort led by Woods to defeat an attempt to turn a hospital into an open shop.

“Your statements to Mr. Elk are defamatory, disparaging, dishonest, and constitute the inappropriate public, personal attacks against individual employees of the organization,” wrote Pullman in the letter obtained by Payday Report. “They undermine your ability to perform your job and damage the reputation of the organization at a time when we are engaged in critical fights on behalf of tens of thousands of workers. They demonstrate extreme hostility to the organization that you are supposed to be encouraging people to join and get involved in”.

“These statements also constitute a violation of SEIU-UHW’s media guideline in our personnel policy handbook which you acknowledged receiving and took responsibility for following,” wrote Pullman. “That policy states: ‘On matters and campaigns related to UHW, staff should not speak to reporters or bloggers. All media requests for interviews should be redirected to communications staff or to a designated point person for a particular issue or campaign, and staff should not email or otherwise talk to journalists on or off the record unless it is part of a coordinated campaign.’”

SEIU-UHW did not return a request for comment about their reasons for firing Woods.

Woods says that she intends to sue over her firing. She says that she has plenty of witnesses that can back her story of retaliation.

Since the publication of her interview with Payday Report, she says additional people have come forward to her with stories of abuse within SEIU-UHW. Woods says that she intends to help organize folks to fight back against what she says as a toxic culture within the union.

“I am doing exactly what they trained me to do, I am standing up for myself,” says Woods

For years, Woods says that she has suffered health problems, nausea, and anxiety attacks as a result of the abuse she says that she suffered within SEIU, but this morning when she woke up expecting to be fired, the all of a sudden disappered.