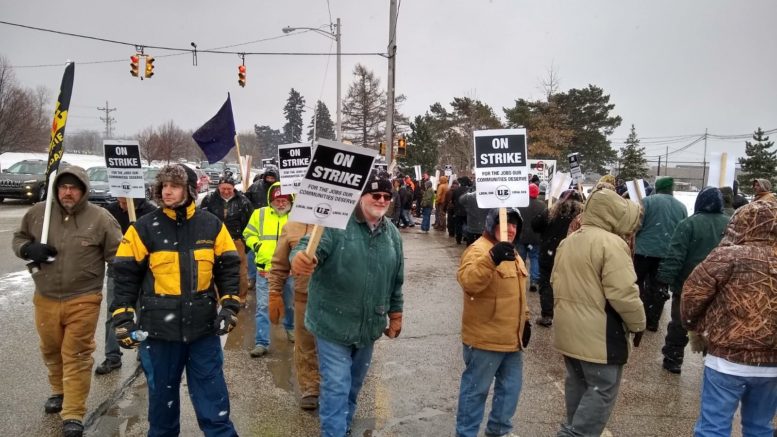 UE Local 506 and 618 ended their ten-day strike against WABTEC this week (UE).

Greeting from the Burgh, where a bout of illegal Clariton Coke Works emmisions-induced respiratory infections seems to be lifting. Although who knows, if the winds shift things could get worse quick.

See our story on how the Steelworkers are providing political cover for US Steel on Pittsburgh’s clean air crisis now that US Steel is appealing an enforcement order from the Allegheny County Health Department to limit their emissions.

Folks, typically writing stories about union democracy turns off readers, but this week, we have seen a big burst of donations.

Folks, if anyone is able to help Payday with our taxes, it would be greatly appreciated and save us $400 on paying a tax preparer. If you can help out, contact us at [email protected]

As many of you know, my father Gene Elk is Director of Organization at the United Electrical Workers (UE) so I was bummed that I was unable to cover the historic 10-day WABTEC strike.

The strike ended this week after 10 days as the company agreed to maintain current working conditions while the two sides attempt to hammer out an agreement over the following days. The UE has a run-down on what they were able to gain as an organization:

While negotiations will continue between the Company and Union over the next 90 days, both parties are optimistic that a mutually beneficial collective bargaining agreement can be reached to position the Erie facility for future growth, stability and success.

Under the agreement, striking employees will begin returning to work on Monday, March 11, 2019.

The UE has not yet released the legal language of the terms of the agreement. For more updates, go to the UE website.

Check out, NPR’s Don Gonyea coverage of how the strike could flip voters in Erie back in the column of Democrats.

This week, Payday published a story looking at the outrage among news members that they won’t be able to vote in the upcoming NewsGuild election. The election pits 61-year-old incumbent Bernie Lunzer, who hasn’t worked in a newsroom since 1989, against 31-year-old Los Angeles Times reporter Jon Schleussw, who as a rank-and-file organizer, helped lead a historic union drive at the newspaper.

Late on Wednesday night, Bernie Lunzer tweeted out his anger over the coverage

“My campaign will have a statement on the distorted @MikeElk story – inaccurate in so many ways” tweeted Luzner.  “The NewsGuild-CWA stands for honesty and integrity and trusted news. We should expect that in our elections too. @news_guild”.

Later, Nolan Rosenkrans, President of the NewsGuild at the Toledo Blade, who is supporting Lunzer’s campaign, issued a statement on Lunzer’s behalf.

The statement came after a tirade of swearing and personal insults was lobbed at Payday via text messages and Twitter direct messages.

“The President of the NewsGuild cannot, and should not, arbitrarily waive Sector Conference rules or alter the Guild’s Constitution. Those changes are made by the delegates at the Sector Conference,” wrote Rosenkrans in a Twitter direct message to Payday Report.  “These rules and the Constitution have been adopted to be uniform and fair, and the matter has not been raised as an issue until now. Demanding that the elected body simply waive the rules in the midst of a conference is undemocratic and could place the Guild at legal risk.”

While supporters of Lunzer’s claim that they had no advance warning of the objections of new members that they wouldn’t be allowed to vote, a letter obtained by Payday Report shows that they did.

The chairs of The Times-Union Guild,  The Los Angeles Times Guild, The New Yorker Union, The Law360 Union, The Sarasota Herald-Tribune NewsGuild, The Casper NewsGuild, and The Chesapeake NewsGuild wrote a letter to those attending the sector conference in late January, asking that the conference approve changes to the constitution giving the right to vote

The letter was later published online and distrubuted to Sector conference attendees:

We request the sector approve a resolution to allow us the right to vote in any upcoming election.

We are excited to work together to improve pay, benefits and working conditions for our colleagues. But we have some concerns”

The details of this conference have been hard to come by. A website posting went up only 23 days ago and mentions nominations seven paragraphs down like a footnote. Electing our leadership should be a priority, organized months in advance with a direct, clear call for nominations.

The window of time when journalists and media workers are eager to organize will not last forever. Our best chance to preserve journalism for our communities is representation by a union willing to listen to its members’ needs.

However, Lunzer’s campaign has stated that allowing the members to vote on whether Lunzer should enjoy a full four-year term, would do greater harm to “union governance” than not allowing them to vote.

“I would have had great concerns, however, if Bernie or any other Guild leader had raised at the last minute such a fundamental shift in Guild governance,” wrote Lunzer’s spokesperson Rosenkrans in an Twitter direct message to Payday Report “This is not how an international union should work. This is an issue that needs proper time, debate, and legal review. To put this on Bernie is an unfair attack and a misunderstanding of union governance.”

For new members, who attended the Sector Conference, the experience left them disappointed.

“I had hoped that we can draft some sort of deal, where we could get some sort of voice even if it was compromised,” said Times Union Guild Chair Andrew Pantazi in an interview with Payday Report.

WV MetroNews has the story:

The unions argued that employees who don’t would receive the benefits of collective bargaining without providing financial support to pay for those activities. In other words, they said, the right-to-work law takes union property.

Bailey concluded that association would not be forced on anyone. Instead, the judge wrote, the fees collected by unions “essentially function as taxes on collective bargaining members for the costs of ‘legislative’ and governmental services.”

The judge also concluded that prohibiting a union from collecting such fees constitutes a taking of property: “It takes money from the union, and derivatively from its members, and essentially gives it to free riders.”

For more, check out WV MetroNews.

For the past year-and-a-half, Payday Report has been covering the ongoing problem of wage theft affecting many of the workers doing the rebuilding work in Houston.

The Fe Y Justicia Worker Center in Houston reports that they can document at least $1.2 million in wages that were stolen from workers each year.

Their average wage theft complaint amounts to $3,600 or the equivalent of nearly three months of work for each day laborer.

“Labor abuses are not victimless crimes. Wage theft means families getting evicted, parents being unable to afford their kids’ medication or their own,” said Marianela Acuña Arreaza, executive director with FJWC. “Worker rights are community issues because they impact families, their neighborhoods and the economic ecosystem. With this data collection, we are getting a better understanding of the extent of it all.”

For more, check out the Houston Chronicle’s profile of the problem of wage theft in the Houston area.

This week, Payday mourns the death of Jean Fairfax, a pioneering civil rights lawyer with the NAACP.

The New York Times has a look at her life:

The night before the school year started, Ms. Fairfax drove around the county, rousing the families of the enrolled black students from bed and urging them by the glow of kerosene lamps not to be intimidated. Early the next morning, she and lawyers from the Justice Department met with more families at the cotton fields and assured them that the black students would be protected.

Tensions rose as the police, lawyers and federal marshals gathered by the school. Ms. Fairfax saw tear gas canisters and rifles in the trunk of a marshal’s car.

Most black families stayed away. Ms. Fairfax stood at the home of A. J. and Minnie Lewis, who were debating what to do, when their daughter stepped up.

“I shall never forget the moment,” Ms. Fairfax said many times, “when 6-year-old Debra Lewis impatiently cried out, ‘What’s everybody waiting for? I’m ready to go.’”

The girl put her hand in Ms. Fairfax’s. Ms. Fairfax and Derrick Bell, then a lawyer for the NAACP Legal Defense and Educational Fund and later a prominent Harvard law professor, drove Debra to school. They escorted her safely to the front door, where the girl single-handedly integrated her first-grade class.

For more check out the New York Times.

— My editor at the Guardian Dominic Rushe has an equally uplifting and depressing look at the life and vision of 81-year-old activist George Lakey:

The civil rights legend bounces around his kitchen in suburban Philadelphia as the icy winds whistle outside. “It’s a huge opportunity. Huge,” he grins, waving his long arms inside his cosy cardigan. “I am grateful that, at age 81, I am around and vigorous enough to be able to participate in the political process because this is, in my judgment, the biggest opportunity for major change, in my country, in my lifetime. A bigger opportunity than the 60s and 70s.”

Lakey should know. An activist from the age of 12, the sociologist and writer has been manning the barricades for close to 70 years. For an unfailingly polite Quaker, he has quite a rap sheet. He was first arrested in 1963 at a civil-rights protest in Chester, Pennsylvania, and was most recently arrested in 2018 at a rally demanding more green energy. There have been “a lot” of arrests in between. He helped sail a ship to Vietnam filled with supplies for peace activists during the Vietnam war, led workshops sponsored by the African National Congress to keep the peace in South Africa’s first multi-racial election in 1994, acted as an unarmed bodyguard for human rights defenders in Sri Lanka and has campaigned for same-sex marriage and LGBTQ rights.

— Last month, Payday covered the historic one-day teachers’ strike in Virginia. The NewsGuild-represented Virginian-Pilot has a look at the struggles facing many teachers to make ends meet:

As a science teacher for more than 100 sixth graders, Walton grades papers, prepares lessons, attends meetings and talks to parents. Any work she doesn’t finish at school ends up being a task for later.

But 13 years into the job she loves, her take-home pay is less than what she earned early in her career.

For more, check out the Virgnian-Pilot.

— Finally, the USA Today has a long look at how minor league baseball players are paid below the minimum wage despite Major League Baseball making more than $10 billion in profits last year.