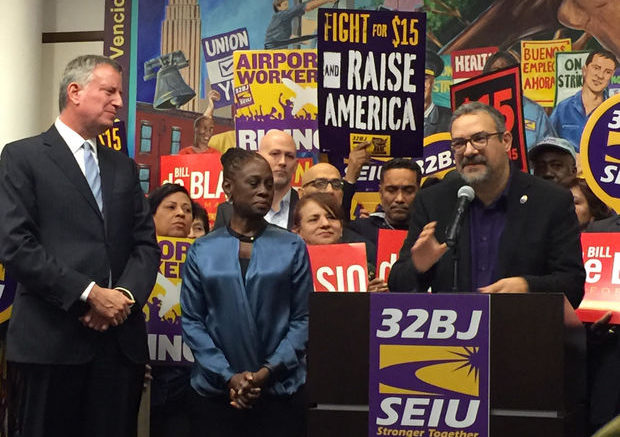 32BJ SEIU President Hector Figueroa has faced criticism for his handling of the dismissal of an SEIU staffer that was found to have assaulted another SEIU staffer.

Following an investigation by Payday Report, SEIU has fired one of their staffers over the assault of another staff member within their organization.

Payday Report had obtained documents that show how, in the summer of 2014, 32BJ SEIU Local 615, based in New England, investigated then-Assistant Director Pedro Malave for a sexual assault against administrative coordinator Daria Alladio. In July 2014, following an internal SEIU investigation, Malave was allowed to leave the local.

He achieved this despite the efforts of Alladio, who advocated to have a permanent record placed in his file.

“We want to thank Ms. Alladio for her strength and courage coming forward,” SEIU-USWW wrote in an email to Payday Report.

“SEIU USWW has zero tolerance for sexual harassment or sexual violence, and had we had prior knowledge of any misconduct or harassment allegations against Mr. Malave, we would never have hired him,” the union declared in a statement. “SEIU USWW was not aware of the allegations against Pedro Malave until we received your email yesterday. Pedro’s employment with USWW has been terminated.”

Reached late Thursday night, Alladio applauded the decision of the union to fire Malave, but said that she still had deeper questions about why SEIU allowed him to be rehired after an internal investigation had concluded that he had sexually assaulted her. Furthermore, she criticized statements made by 32BJ SEIU President Hector Figueroa that wrongdoers, even those who sexually harassed, deserved second chances.

“I commend SEIU USWW for their stance on sexual violence and for the swift and decisive action taken in this situation,” Alladio wrote in an email to Payday Report. “By terminating Mr. Malave’s employment, USWW’s actions demonstrate that they are willing to prioritize the well-being of women staffers and members, who otherwise may have been left vulnerable to sexual harassment or assault.”

“I now look to SEIU 32BJ to see if they will do the same for current or future victims,” said Alladio.

Alladio told Payday that she was concerned by statements made by 32BJ SEIU President Hector Figueroa earlier in the day to Payday.

In response to the revelations, Figueroa said in an interview with Payday on Thursday that the rehiring of Malave at another SEIU local was not a problem “so much of communication.”

On the basis of labor rights, Figueroa defended the hiring of workers who have committed egregious past behaviors, including sexual harassment.

“We are not going for a policy that anybody who does wrongdoing should never have a job,” he said. “That’s not the philosophy of the labor movement or the union.”

In an email to Payday, Alladio criticized the statements.

Later after facing criticism for his statements on Twitter, Figueroa backtracked on his previous remarks to Payday regarding whether people who have committed sexual harassment deserve to be hired elsewhere.

“As I have said and we have demonstrated we have zero tolerance for sexual harassment/predators in our union”.

Discussing changes for the future, Figueroa acknowledged earlier in the day that SEIU 32BJ “is going to be much more clear with our sister locals and the international when circumstances like this happen.”

“What we want to reiterate to our staff and to the public is we have a very strict policy about how people need to behave on the job,” Figueroa told Payday reporter Max Zahn.

However, questions linger about 32BJ SEIU’s action in the handling of Alladio’s case and whether or not Malave was fired or allowed to leave the union voluntarily without any permanent record that could prevent him from getting jobs at other SEIU locals.

Documents obtained by Payday showed that for more than a year following the investigation, Alladio attempted to get answers from 32BJ SEIU Chief of Staff Laura Caruso about whether Malave had been fired or allowed to resign temporarily from the union. (To see these documents, check out our full investigation here.)

“I don’t understand how this slipped through the cracks when Pedro was hired at SEIU UHW,” Alladio told Payday. “It is also baffling to me that when I informed management that he had been rehired at another SEIU local, they said nothing could be done because it was technically a different employer.”

“I also hope that the International will take the necessary steps to create a mechanism to ensure that there is more transparency and communication between Locals with regards to crucial information being shared,” she continued.

On Wednesday, SEIU international spokesperson Sahar Wali told Payday that Malave’s rehiring by a local affiliate of their union was not their responsibility. “The [International Union] doesn’t hire staff for local unions.”

However, Alladio raised questioned about Wali’s statement that SEIU does not have control over the hiring of locals. According to SEIU’s Code of Ethics: “No person shall serve as an officer or managerial employee of SEIU or any Affiliate who has been convicted of any felony involving the infliction of grievous bodily injury, or the abuse or misuse of such person’s position or employment in a labor organization to seek or obtain illegal gain at the expense of the members, except for the limited exceptions set forth in applicable federal law.”

According to SEIU’s own guidelines, the international has the power to prohibit hiring of certain individuals over certain offenses, but sexual harassment or abuse is not included in those situations. This would require a change to the Code of Ethics, a change that many women within the union would like to see.

“One concrete step in the right direction would be for the International to amend the Code of Ethics to expand the section concerning Disqualification from service to SEIU or Affiliates to include managers separated or terminated for sexual harassment,” says Alladio.

A group of SEIU staffers have set up an internal watchdog group to encourage others to come forward to report abuse in the union. Those who would like to be involved may contact them at [email protected] as well as twitter account @metooseiu

Alladio says that she hopes that her experience in coming forward to hold Malave accountable for his repeated sexual assault will encourage other women to take similar steps.

“My hope is that my story will encourage other women to come forward and speak out publicly about sexual misconduct — I do not believe that this is an isolated incident within the labor movement,” Alladio writes. “I believe that the culture needs to change; women speaking out will help to force that.”

Donate to Payday Report so that we can keep exposing sexual assault and misconduct in the labor movement.