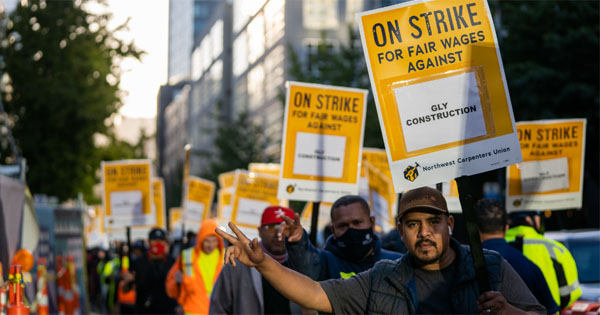 Carpenters Strike in Seattle (The Stand)

Greetings from the Burgh, where fall is slowly beginning to settle in.

Each dollar helps us maintain the Strike Tracker and replace our $10,000 grant that expired last month.

Donate Today to Help Keep Up Our Fundraising Momentum

Tortilla Makers in Chicago Walk Out, Get Locked Out

But yesterday, more than 60 workers walked out to protest their low pay and unsafe working conditions at the factory. However, when 14 workers attempted to return to work today, they discovered their employer was not allowing them to return to work.

The workers said despite this, they will continue organizing and fighting back.

“I do think [our organizing] is going to have a big impact,” locked out worker Irma Gonzalez told Eater. “This is a big issue in our community. The Latino community really relies on tortillas. They need us to work.”

For more, check out Eater.

Last week, high Single-A minor league players from the Philadelphia Phillies and Boston Red Sox donned #FairBall wristbands during a game to protest their low wages, as players at high Single-A level of minor baseball have a minimum wage of $500 a week.

However, Phillies minor leaguers said they were being reprimanded by management for participating in the action. USA Today has the story:

“We heard there was some backlash, some troubling reports, and we are definitely looking into it,’’ Harry Marino, executive director of the non-profit group, told USA TODAY Sports. ‘We’re very concerned. It’s totally inappropriate to have any kind of backlash.’’

Marino declined to identify those players who voiced complaints, citing their request for privacy and potential retaliation, but will continue to investigate.

“There has been a response from the team side trying to suppress that speech,’’ Marino said, “telling them they should be careful, not to talk like that, and think twice. Teams should be very careful trying to dissuade speaking out.

“The Phillies should know they’re being watched.’’

For more, check out USA Today.

This month, rank-and-file carpenter union members in Seattle chose to vote down a proposed agreement that the Seattle Carpenters Union recommended they approve.

The final vote was rejected by a margin of 56% to 44%, and afterward, workers chose to strike.

The Seattle Carpenters Union decided to limit their picket lines to just a few sites in the city. However, rank-and-file carpenters chose to go on wildcat strikes at other sites, with the encouragement and support of socialist Seattle city councilwoman Kshama Sawant, who the union leadership has attacked.

Now, the Seattle Carpenters Union has paused picket lines at all sites and attacked Sawant for backing the wildcat strikes.

Rank-and-file carpenters in Seattle said that they are still determined to continue picketing and organizing wildcat strikes.

“We can’t stop picketing because once we stop picketing, all these trades are going to see that we’re weak and start crossing,” carpenter Joe Sosa told The Seattle Times. “Our intention is to keep the momentum going.”

Earlier this week, California Governor Gavin Newsom vetoed a bill that would make it easier for farmworkers to unionize.

The veto comes after the United Farm Workers union organized heavily on Newsom’s behalf to fight off attempts at a recall election.

The farmworkers had initially planned to march 260 miles this week from Tulare county to Sacramento to draw attention to the conditions of farmworkers. Now, they plan to march to French Laundry, the high-end restaurant where Newsom was caught dining with lobbyists during the height of the pandemic when he had advised Californians to avoid eating out in large groups.

“Workers are now marching towards the French Laundry, hoping to finally meet with the Governor,” the United Farm Workers said in a statement.

For more, check out The Sacramento Bee.