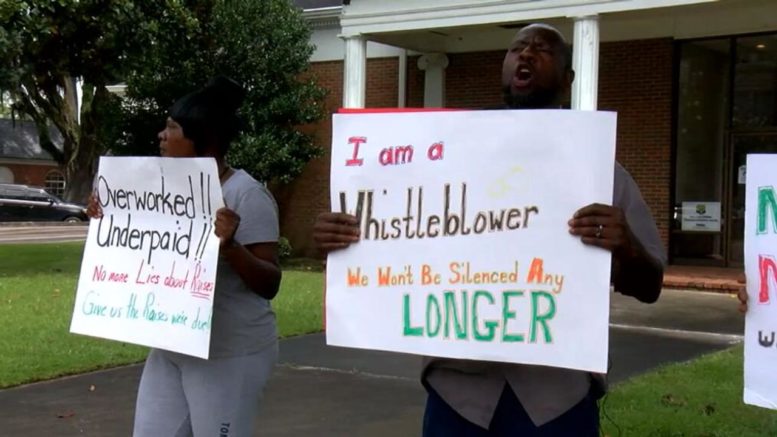 A group of striking in Pelham City, Georgia demand higher wages and more respect on the job (WFXL)

Greetings from the Burgh, where Payday is excited to see the Milwaukee Bucks, the team that started the NBA strike last year, win the NBA Finals.

“We’re asking for justice, we’re asking for answers. If it takes a week, two weeks, we’re gonna be out here,” City of Pelham employee William Almond, Jr. told WFXL. “We’re gonna let our voices be heard and put it out to the public and hope that the public can help us bring awareness to this.”

For more, check out WFXL.

Nationwide, the group Rideshares Drivers United has urged consumers to steer clear of rideshare services like Lyft and Uber as many drivers nationwide have organized protest actions.

“The pandemic really underscored for us our vulnerability when the market dried up,” Rideshare Drivers United member Daniel Russell told The Guardian. “Now is the time to take action.”

For more, check out The Guardian.

All across the United States, retail workers and other low-wage workers are rising up and walking off the job while demanding better working conditions.

Payday needs your help to keep covering this movement. Donate today to help us track the growing strike movement across the United States.

Sign up as one of our more than 600 recurring donors today.

In Puerto Rico, truck drivers hauling food and retail goods have gone on a nationwide strike today. Bloomberg has the story:

Edwin Marrero, the president of the Truckers Broad Front union, said the group hopes to begin negotiations with the federally-appointed Fiscal Oversight and Management Board that controls the bankrupt island’s finances.

The strike “will be permanent until the board sits down with us and we reach an agreement,” Marrero told Puerto Rico’s WKAQ radio.

The oversight board has objected to government regulations that would increase freight tariffs, including for private contracts, saying the measure violates the 2021 Fiscal Plan.

For more, check out Bloomberg.

Recently, a video of a young Black teenager riding a bike with a bag full of stolen goods out of a San Francisco Walgreens store went viral. Local media outlets used the video as evidence that shoplifting was up dramatically in San Francisco whereas evidence shows shoplifting is down.

However, as Fairness and Accuracy in Reporting (FAIR) has documented citing the worker of FAIR’s Julie Hollar, the media spent far less time covering how Walgreen’s had stolen millions from its workers in wage theft:

FAIR identified 309 published pieces on the 21-second video, using a combination of Nexis and Google advanced search to find every article published by a news outlet, from the video’s publication on June 14 to July 12—a 28-day timeframe.

Compare this to another Walgreens-related theft story: the November settlement of a wage theft and labor law violation class-action lawsuit against Walgreens, filed by employees in California for $4.5 million.

A multimillion-dollar settlement coming after a two-year legal struggle, this should have been a national news story, not to mention a major topic in local California outlets. But FAIR was unable to find a single general news outlet that covered the settlement, looking from November 2020 to July 2021, using the same search parameters as the aforementioned shoplifting video.

For more, head to FAIR.