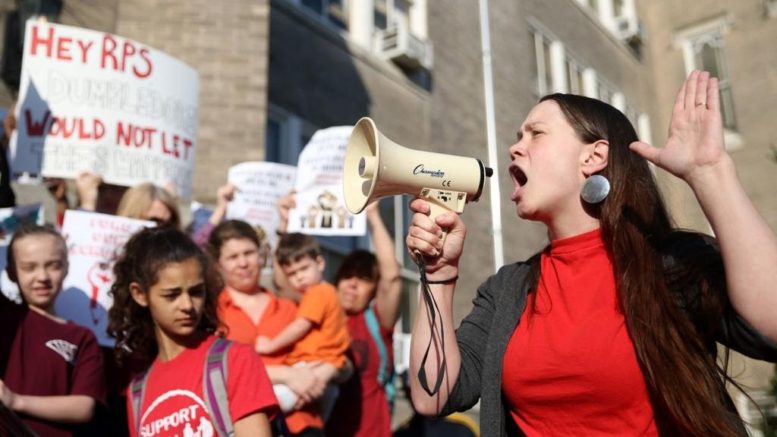 Greetings from the Burgh, where I’m getting ready to go down south for the rapidly growing Virginia Teachers’ Strike.

Please if you can, throw a few bucks in the Payday Report Virginia travel fund.

After 7 year-Long Battle, NBC Workers at Peacock Production Get a Union Contract

Back in 2013,  legendary MSNBC host Ed Schultz (Rest in Power) declared that the Guardian’s David Sirota, Bloomberg’s Josh Eidelson, and myself were blacklisted from his program for criticizing his refusal to speak out on behalf of Peacock Production Workers fighting for a first union contract.

For years, NBC New’s subsidiary Peacock Production, which makes documentaries, first refused to recognize the union as many of the workers were classified as independent contractors and freelancers. Then Peacock refused to bargain with them.

However, after a nearly 7-year long struggle, the Writers Guild of America East announced today that they finally have the first contract there.

The contract mirrors provision made for freelancers in the Writers’ Guild of America East in Vice allows freelancers to receive payment towards health care to paid into the union’s Entertainment Industry Flex Plan. Freelancers will also receive contributions to the union’s 401k plan.

In addition for the first time ever, the freelancers will receive 8 paid days off and yearly annual increases in pay.

“Nonfiction television Writer-Producers move from company to company as their shows wrap.  Some producers make health benefits, but those benefits don’t mean much to freelance employees as it takes too long to qualify, the benefits aren’t worth the out-of-pocket cost, and employer-paid coverage terminates when the employee moves on” said WGAE Executive Director Lowell Peterson in a statement.

NewsGuild Has No Plan for Freelancers

While the Writers’ Guild of America East has its own union plan that can provide health care for freelancer journalists such as myself, the NewsGuild, which represents the Guardian, where I am employed, doesn’t have a health care plan. The Guardian union contract currently doesn’t include union protections for freelancers like me making my pay schedule and amount of part-time work unpredictable and vicarious.

So far, no recent NewsGuild digital media union victory has made gains as the Writers Guild of America East, whose contract at HuffPost also contains provisions to convert freelancers into regular employers after 6 months.

Payday Report calls on the NewGuild to follow the Writer’s Guild plan and develop such a plan. I shouldn’t have to be held responsible for paying medical bills worth $500 a month while barely getting by.

In lieu of union contract, donate to Payday so that I can achieve some modicum of a living wage as a labor reporter.

Richmond City Schools to Close for Teachers Strike with 3,000 Teachers Allowed to Walkout

Strike fever is spreading in Virginia as teachers are transfixed by the events happening in LA. (See Payday’s 1,600-word preview of the strike “Inspired by L.A, Virginia Teachers to Walk Out on January 28th”)

Part of the success of many teachers’ strikes hinged on school supertienedents, often appointed by democratic school boards, giving local teachers the days off. Using emergency powers, school superintendents are allowed to declare school closed if they fear they can’t adequately staff with them; let unions off the legal hook.

With local school superintendents, refusing to pursue legal charges against teachers for taking the day off, many local unions in states like West Virginia, Oklahoma, and Arizona found that once teachers found out that they wouldn’t get in trouble for skipping school that may choose to join the strike last second; swelling strike numbers exponentially in the days leading up to strikes.

This week, the Richmond City Schools, were more than 3,000 teachers are employed, declared that they will close on January 28th allowing teachers to walk out.

The closing of school will mean that 24,000 students will have the day off; leading to many parents taking the day off to be with their kids. In previous states, many parents decided to take the day off would then march with their students. Similar types of parent solidarity action are expected in Richmond.

Fairfax County School Will Allow Teachers to Take the Day Off

Payday Report also has learned that the school superintendent for Fairfax County, Virginia Schools, where Arlington and Alexandria are located right outside of Washington, D.C., will also allow teachers to take personal days to attend the Day of Action in Richmond.

However, so far support isn’t strong for the action in Fairfax County. Only recently has the Virginia Education Association, which is facing criticism from membership for being unresponsive, signed onto the event shortly after the Virginia Public Teachers Association endorsed it earlier this month.

Even many union staffers, who lived in Virginia, informed Payday Report that they didn’t know about the planned walkout till they read about in Payday Report.

Support for striking is spreading not just in the urban areas of Virginia, but also in some of the poor rural Virginia counties.

Alleghany County, population 15,000,  situated along the West Virginia population, voted for Trump by 66%.

This week, Alleghany County announced that it would close its school as well to allow its teachers to participate in the walkout. Many small rural school districts, some of the poorest in the state, are expected to follow suit.

Most School Superintendents Becoming Supportive of the Strike

Overall, Virginia Educators United organizers are finding that overall most school superintendents with whom they are interacting, would allow teachers to walkout.,

“From the feedback, we are getting, there have been more localities with supportive administrators of teachers attending this event [on January 28th] than the municipalities disapproving their leave for the day,” says Virginia Educators United Brian Teucke.

Recently, released BLS statistics today showed that the organizing programs that many unions put in place to deal with the loss of potential union membership workers. According to the Bureau of Labor Statistics survey of union households, the union lost only 0.2% of their membership in the public sector in 2018.

According to the survey methodology, 0.5% which is in the margin of error meaning that union membership may have slightly dropped or remained even last year.

Read the Center for Economic and Policy Research analysis here.

Next week, I’ll have an article in the Guardian coming out looking at the change in organizing culture, which has lead many unions to actually make gains.

Folks, we gotta go run to dinner with my folks, but pass the hat and help us go to Virginia next week.

Be the first to comment on "Richmond Schools to Close for Walkout – Fairfax County Will Allow Teachers Off – BLS: Union Stemmed Janus Tide"