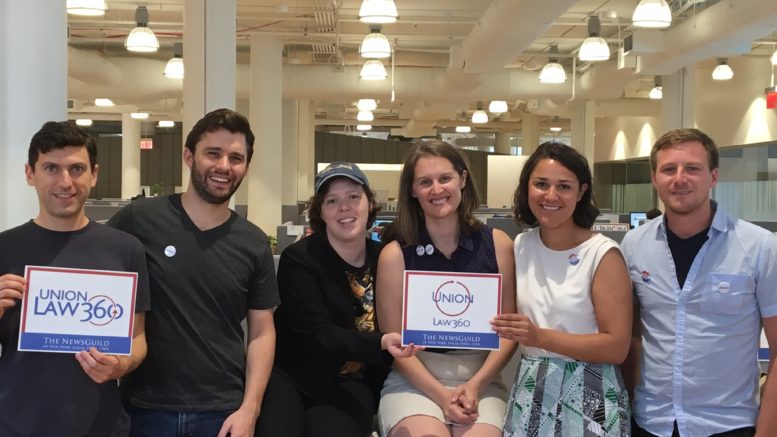 Today, media workers at Law360 struck a decisive blow in the burgeoning media workers rights movement. Staff at the legal news publication voted 109 to 9 to join the NewsGuild in a National Labor Relations Board election. The victory at Law360 opens the door for further organizing at mainstream corporate media outlets.

In the last year, over nine digital media outlets have voted to join unions, in the biggest wave of unionization to hit the media industry in decades. However, the campaign at Law360 was by far one of the toughest fought campaigns of the digital media unionization movement.

Two weeks into her new job, Law360’s general counsel contacted Reuters and threatened to sue them if Russell-Kraft was not fired. Two days later, she was terminated. She has been doing freelance work since.

The firing motivated many Law360 staffers to seek the protection of a union. After ten months of solid organizing work, the group petitioned the company to be represented by a union last month.

Up until the end, management resisted attempts by the workers to unionize, and challenged several of the mail-in ballots sent to the NLRB. But when the result of the votes were announced, Law360 staffers took to Twitter to celebrate.

The newly unionized workers at Law360 are almost certain to face an uphill battle to negotiate a first contract, as the company is refusing to even sign off on the certification of the vote. Regardless, the workers have momentum and resolve on their side. As Stephanie Russell-Kraft tweeted, “Hey #Law360Union, you wonder why your reporters want a union so badly? You’re challenging a 109-9 yes vote #law360union.”

The vote is a resounding win for the digital media unionization movement. Prior to this successful union election, nearly all of the outlets that had unionized where left-leaning outlets. With this victory, efforts to organize other mainstream corporate media outlets are likely to pick up steam.

Be the first to comment on "Resounding Victory for #Law360Union"