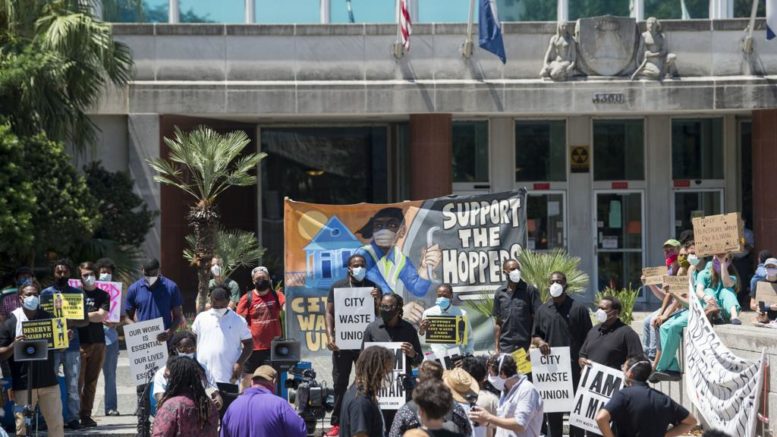 “We are digging in for a long fight,” says New Orleans striking sanitation worker Jonathan Edwards late on Thursday night about being fired in early May by People Ready, a contractor of New Orleans’ Metro Services.

Nearly a month ago, People Ready fired Edwards and 13 other coworkers who went on strike.

Forced to work in one of the world’s worst hotbeds of COVID, garbage pickers like Edwards, employed through the temp firm People Ready and contracted by Metro Services, were only paid $10.25 an hour without benefits.

On May 6th, workers went on strike demanding $15 an hour, hazard pay, protective equipment, and health insurance. However, the workers were fired two days later on May 8th.

Instead of re-hiring them, Metro Services replaced them with prison labor. The workers have since filed National Labor Relations Board charges alleging that they were illegally fired for striking.

“Metro Services Group has long been an advocate of helping persons who had been incarcerated return to society in a meaningful and productive way,” said the city’s sanitation services in a statement released earlier this month. “Metro makes no apologies for this policy as a core element of our commitment to being good corporate citizens.”

The workers’ move to unionize comes as The Appeal reports that some sheriffs in rural Louisiana are continuing to allow prison labor to replace workers refusing to work in food processing plants.

Undeterred by their firings, the 14 fired garbage hoppers formed the City Waste Union in the week after getting fired to fight back. Buoyed by community support, and enhanced pandemic unemployment benefits, the workers plan to win more than just hazard pay, but a union to protect all waste workers in New Orleans.

The workers hope that the new City Waste Union will help to change what they say is an abusive system of subcontractors that exploits waste workers in New Orleans.

“We have been dealing with this for years, and if we got this union organized, people in the future would have a better situation,” says Edwards.

Despite working there for 13 years as a garbage truck hopper for a variety of temp companies used by the city, Edwards still makes only $10.25 an hour.

“We dealt with bacteria, feces, and whatever prior to the pandemic,” says Edwards. “And, due to the pandemic, it’s even more dangerous. Nine out of ten people wouldn’t do this job.

“Instead, they are forcing these guys, who have no experience to do something that they’ve never done in their lives. It’s wrong. These people are still being put in harm’s way and for what when you have these guys like me, who are well-experienced and not asking for much at all.”

The union effort has inspired mass community support. A GoFundMe effort launched by the workers has raised over $76,000 in strike funds for the 14 striking workers and the City Waste Union.

One study by the University of Chicago showed that nearly 2/3rd of workers nationwide would be earning more on enhanced pandemic unemployment benefits than in their current jobs.

Workers in New Orleans say that the financial and community support that they have received has given them the confidence to wait out the legal and political process to win their demands.

“We are prepared for a long fight,” says Edwards.

So far, though, the Office of New Orleans Mayor LaToya Cantrel, who was elected as Mayor in 2017 as an anti-establishment candidate on a platform of $15-an-hour minimum, has yet to meet with the workers.

“The Mayor’s Office has not truly addressed this at all,” says Edward’s niece, Daytrian Wilken, a local community activist who has been helping to form the City Waste Union.

So far, New Orleans City Council President Jason Williams is the only city official who has met with the workers.

“We believe that the city could compel [them] to come to the table and have the conversation that we are asking for,” said Wilken late on Thursday night.

Workers complained that Metro Services continued to blast the workers as unwilling to risk themselves to provide community services when so many other workers are looking for jobs.

“Black men have this superhuman syndrome, where they believe that any weakness makes them look like less of a man or less of a superhero, and that’s not the case,” says Wilken.

Wilken says that helping her uncle Jonathan navigate the wildcat strike has inspired her to pursue more organizing work.

“We understand that superheroes can be wounded, and all we are asking for Metro to do is to take this in stride and be leaders,” says Wilken. “Instead of doing that and being leaders, they have simply taken the stance that they are going to respond to this defensively and says that people like Jonathan and all the people striking that they should be grateful for Metro for providing them with gainful employment.”

In New Orleans, garbage workers buoyed by an overwhelming tide of community support say workers everywhere shouldn’t be afraid to take risks; that workers will support them when they know their story.

Donate to Help Us Continue to Cover Labor’s Fightback against COVID.

Be the first to comment on "Replaced by Prison Labor, NOLA Garbage Workers Form Union to Fightback"