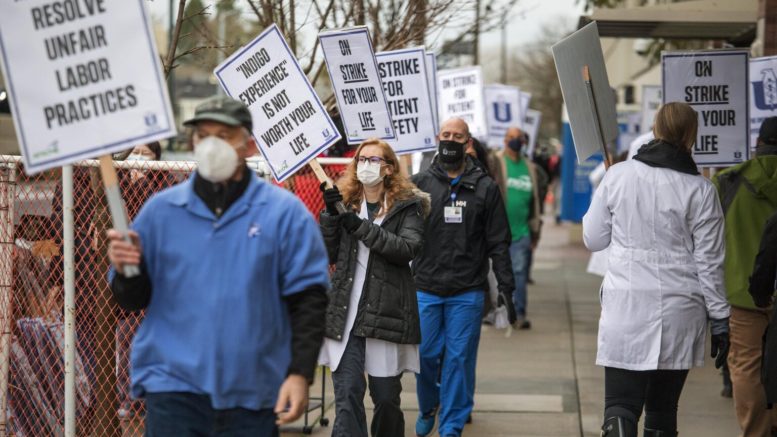 Greetings from the Burgh, where we are having a sudden fundraising push.

We’re Thankful to our 500 Recurring Donors This Thanksgiving

This thanksgiving we’re grateful to our more than 500 sustaining donors who help us stay sustainable and take holidays like Thanksgiving off.

As we celebrate Thanksgiving this week, we’re hoping to sign up another 10 monthly donors by the end of this month. If you can, sign up as a recurring donor today to support independent journalism.

And if you prefer, you can make a one-time donation here. Thank you.

With medical conglomerates increasing in power, some doctors are starting to unionize for the first time. In Puget Sound, a group of 200 doctors and nurse practitioners at MultiCare have gone on strike for their first time.

The doctors and nurse practitioners complained of inadequate protection and not enough staffing to do their jobs.

“It’s quite frustrating actually, to be honest with you,” Dr. Amir Atabeygi told KING-5.  “At all of our clinics, our numbers have drastically increased over the last few weeks. Some places up to 50% more than it used to be.”

For more, check out KING-TV.

In Illinois, over 700 nursing home workers have gone on a massive strike at over 11 locations over unsafe working conditions.

“We are striking for our lives and to protect ourselves and our families,” one nursing home worker told WMAQ.

For more, go to WMAQ.

Save A Lot Food Store Workers Strike in Rural Ohio

At a Save A Lot distribution center in Austinburg, Ohio, over 200 warehouse workers have walked off the job demanding better working conditions.

The Ashtabula Star-Beacon has the story:

[Union secretary-treasurer Barb Caruso] said workers are paid on the basis of their productivity using a running 12-week average, but if a worker misses time due to COVID-19 or because of quarantine, their lower productivity is counted against them when calculating their wage.

Workers also want another pandemic bonus like one paid earlier in the year.

“The calls of the workers for a reinstatement of the bonus has fallen on deaf ears,” Caruso said.

For more, go to the Ashtabula Star-Beacon.

In a historic union election, more than 150 Amazon warehouse workers in Alabama are seeking to vote for a union.

“We face outrageous work quotas that have left many with illnesses and lifetime injuries,” the Retail, Wholesale and Department Store Workers said in a statement. “With a union contract, we can form a worker safety committee, and negotiate the highest safety standards and protocols for our workplace.”

Already, the effort has attracted national attention with Senator Bernie Sanders tweeting out his support.

“All workers are entitled to decent wages and working conditions, which is why I stand with the Amazon warehouse workers in Alabama exercising their constitutional right to form a union,” Sanders tweeted. “Mr. Bezos, the wealthiest person in America, must not interfere in this election.”

Taking a page out of the anti-union playbooks of the 1800s, Jeff Bezos has hired the Pinkerton Detective Agency to spy on pro-union workers.

Lauren Kaori Gurley at Vice has the scoop:

In a report from November 2019, however, an analyst wrote that Amazon hired Pinkerton spies who were “inserted” into a warehouse in Wroclaw, Poland, to investigate an allegation that management coached job candidates on how to complete job interviews and possibly even conducted the process for them.

The Pinkerton spies were posted in a Wroclaw warehouse known as WRO1, operated by the Amazon contractor ADECCO, to investigate the allegation, according to the Amazon report. “PINKERTON operatives were inserted into WRO1 ADECCO between 2019-11-19 and 2019-11-21. No identifiable evidence of coaching on behalf of the agency recruiters was observed,” the document states. “Investigative actions to prove/disprove this hypothesis are ongoing.”

The report refers to the Pinkerton Detective Agency, which in the late 19th and early 20th centuries in the United States supplied detectives to infiltrate unions and hired violent goon squads to intimidate workers from engaging in union activity in steel mills. Today, Pinkerton is a subsidiary of the Swedish security company Securitas AB, and has supplied operatives to monitor strikes in West Virginia as recently as 2018.

Be sure to also check out this short video that Zach Roberts and I made on the history of the Pinkertons at the Battle of Homestead site.

Alright, folks, that’s all for today. Hope everyone has a great Thanksgiving. Keep emailing us tips, story ideas, and links to articles [email protected].

Donate so we can afford to take a few days off of fundraising over the Thanksgiving weekend.

Most importantly, think about becoming one of our more than 500 recurring donors to create a sustainable base of financial support.