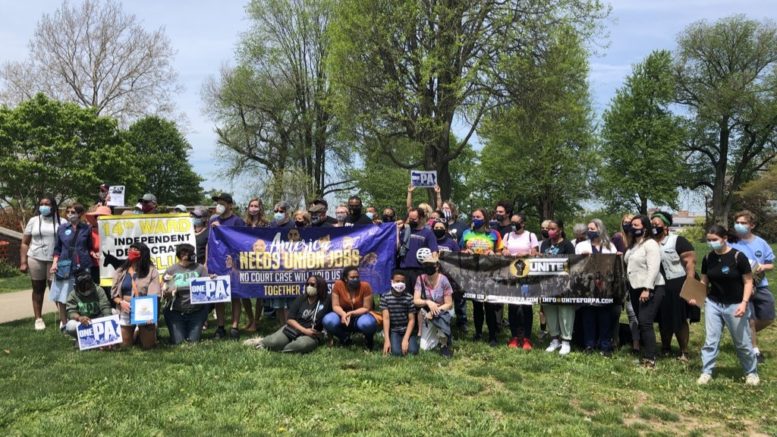 PITTSBURGH, PA – For the first time in Pittsburgh’s history, a Black candidate, 51-year-old State Representative Ed Gainey of Homewood, is running a well-funded campaign that some political observers say could topple Pittsburgh’s two-term mayor Bill Peduto on Election Day this May 18.

Progressive groups were out in full force last Sunday in Pittsburgh’s Mellon Park, as nearly 100 people prepared to go door-to-door on behalf of Gainey, knowing that Peduto has drawn deep protest from racial and economic justice groups.

“It is time that we have a city that is united, a city where everybody is respected, a city where justice means something,” said Gainey as he fired up the crowd to go knock on doors. “I see a new Pittsburgh!”

For the last eight years, Peduto has been Mayor of Pittsburgh and overseen a breathtaking growth in the health care, and particularly technology, cores with Google moving their largest corporate headquarters in Pittsburgh in the middle of a Black, working-class community of East Liberty; less than a mile from where Gainey grew up and now lives.

The tech boom has meant skyrocketing gentrification and aggressive policing policies, which have led to the majority of the Black population of East Liberty being pushed out in less than a decade.

A recent data analysis by the Abolitionist Law Center found that Peduto’s policies have also led to Blacks accounting for 70% of the arrests made in Pittsburgh while representing only 23% of the population.

After spending the last few years hitting the streets and talking with protestors and activists seeking to change the city, Gainey said he was inspired to run for mayor to change Pittsburgh.

“The common denominator that we want in this city is justice. We want justice for everybody,” said Gainey on Sunday. “We want people to feel that this is a city where everybody can have access to opportunity. It’s time for the ‘New Pittsburgh’ and if we as ‘New Pittsburgh’ can make a New Pittsburgh emerge, it’s because we knocked every single door today.”

A few years ago, it would have seemed unlikely that Peduto, who had been credited with attracting major tech companies to the area, would have stood a serious chance of losing re-election.

Even though Peduto has outraised Gainey nearly 4-to-1, Gainey has the backing of several major Super PACS founded by his allies in organized labor. (So far only four unions have backed Gainey: SEIU Healthcare PA, the Painters Union District 57, the Operating Engineers Local 66, and the United Electrical Workers (UE).)

A new force of young progressives, more closely linked to grassroots social movements opposed to the labor’s old guard and the ‘Democratic Machine,’ have also emerged in Pittsburgh over the last few years.

They have defeated several incumbent State Representatives, county council members, and other local elected officials, who were seen as part of the old Democratic Machine in Pittsburgh.

One of those leaders is socialist State Representative Summer Lee, the first Black woman ever elected to the State House from Western PA, who was there on Sunday to fire up the crowd to knock doors on behalf of Gainey.

“The power of the people always is greater than the people of power and that’s what this is about y’all,” Lee said, relaying the success that the local progressive groups have had in defeating local Democratic-Machine politicians.

“It has taken really till the last four years for us to see a change in this place and that shows what it looks like when people, everyday people, black and brown, and white and queer and trans and Asian and straight and Jewish and poor and rich, from this side of town or that side of town,” Lee said. “When we build movements that include all of us — when we build movements that are big enough for all of us — then our movements cannot be defeated.”

As a state rep, Gainey wasn’t always the most progressive, which has left his opponents drawing attention to his voting record as the election race heats up.

He voted once for pro-fracking measures in the PA State House and once voted for E-Verify. However, Gainey says that watching a younger generation of women politicians, particularly State Representatives Summer Lee and Sara Innamorato, as well as County Councilwoman Bethany Hallam and Olive “Liv” Bennet, has inspired him to be more progressive. (All of these women defeated machine Democrats in the last four years and are backing Gainey’s run.)

“What they’ve done is they’ve opened it up,” Gainey told Payday on Sunday speaking of the group of young elected progressives. “I think the reason why they pushed the door open and why they’ve been so successful and I’m so glad this happened…America is here screaming for justice.”

Peduto and his allies are clearly worried about Gainey and have been accused of using racist tactics to try to get the majority-white city of Pittsburgh to vote against Gainey.

The union-funded mailers drew criticism with some Gainey supporters calling them racist as they alleged the photos significantly darkened Gainey’s skin color.

“It is a textbook example of using filters, re-coloring, and effects to make a Black man look darker, menacing, and aggressive,” tweeted Asian-American activist Darwin Leuba. “This mailer was designed to exploit and affirm racial bias.”

So far, the Peduto camp has refused to denounce the mailer sent by Williamson. The Peduto camp didn’t respond to repeated requests from Payday for this story on the controversial mailers.

While Peduto and his allies have tried to dissuade young liberals from flocking to Gainey’s camp by highlighting a few “bad votes” by Gainey over the years, activists see Gainey’s evolution on issues as a positive thing.

Progressive activists have seen a receptiveness to Gainey meeting with groups and admitting his mistakes, unlike Peduto who has repeatedly publicly attacked Black Lives Matter protests for causing “disruptions.”

After Gainey voted for E-Verify, a bill backed by the Pennsylvania AFL-CIO that would force employers to use the E-Verify to check on the immigration status of construction workers, progressives met with Gainey, who quickly admitted his error and worked to correct it.

“When the immigrant community went to Ed and said, Hey, what’s up with that? He said, ‘I really didn’t understand that, let’s form the welcome caucus,’ ” said SEIU Healthcare PA Vice President Lisa Franks. “So he’s part of the welcome caucus to work on welcoming immigrants.”

Despite the attacks on Gainey, Pittsburgh progressives like Bethany Hallam, a native Allegheny County councilwoman, remain excited about his leadership and are working hard to elect him.

Revving up the multiracial crowd on Sunday, Hallam reminded the crowd about Peduto’s history with protestors.

As canvassers prepared to head out, Hallam sought to remind them that despite being heavily spent from the combined forces of developers, the Democratic Machine, and labor’s old guard against them, that victory was within reach for Pittsburgh’s new progressive coalition.

“We are here to reclaim the power of the people, we are here to elect Ed Gainey as our next mayor of Pittsburgh and by all of you showing up here today, ready to go, and got your sneakers on ready to knock some doors — that is what I like to see,” Hallam said. “The future is when we have a say in the people who are leading our communities. We have a say in what the future of Pittsburgh looks like.”