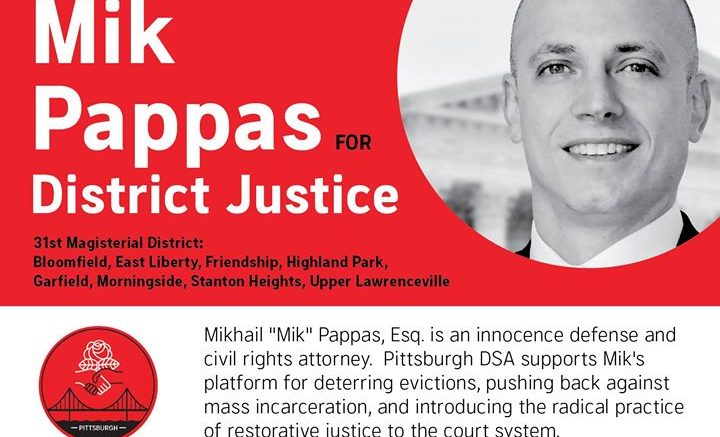 PITTSBURGH, PA. – The party inside of the MixTape bar in the historically lefty neighborhood of Garfield was absolutely jubilant. Hipster dance music blared over speakers as young hipster members of the Pittsburgh chapter of the Democratic Socialists of America (DSA)  embraced long-time neighborhood activists, who had been involved in organizing in the community for decades.

The scene was, for a lack of a better word: Lit!

“I can’t believe it,” said Pittsburgh DSA Co-Chair Adam Shuck and author of the popular Pittsburgh food and politics newsletter “Eat This, Read This”.

“I just can’t believe it,” Shuck told me over and again as activists repeatedly interrupted our conversation to embrace the 6 foot, 2 gentle giant.

Shuck and his comrades had reasons to be ecstatic. In their first major electoral test, the 385 dues-paying members strong Pittsburgh DSA proved that they weren’t just a group of hipsters, but a serious political force that could shake up stagnant Pittsburgh political machine.

Not only did a DSA member flip a county council seat back to Democrats, but the DSA toppled District Justice Ron Costa, one of the longtime bosses of the Costa political family. In addition to these wins, reform oriented candidates in the industrial, inner-city suburbs also defeated long-time incumbents in key races.

The campaigns were noted for their innovativeness and creativity in a Pittsburgh political scene long ossified by political legacy candidates.

Despite running in some of the richest suburbs of Pittsburgh as well as some inner-city neighborhoods, Prizio was able to knock off incumbent Republican county councilman Ed Kress by a margin of 50.8% to 49.1%.

However, the most stunning victory was the defeat of 24-year incumbent District Justice Ron Costa by independent candidate Mike Pappas. A civil rights lawyer and former staffer to legendary progressive State Senator Jim Ferlo, the lifelong Pittsburgh resident Pappas ran under the slogan of “Addiction is not a crime”.

As a District Justice, Pappas pledged to reduce mass incarceration and implement principles of restorative justice. This radical platform garnered the attention of progressives nationally and earned him the first-ever endorsement issued in a judicial race by the Bernie Sanders backed group Our Revolution.

Pappas’s DSA endorsement prompted Judge Costa, an old-school machine Democrat,  to send a letter to thousands of his constituents warning them that “You need to know that the DSA is a splinter group that has called for the elimination of prisons and police as well as drastic changes to our law”.

Despite the red-baiting and lacking a position on the ballot as a Democrat, Pappas trounced the 24-year incumbent Costa by an 11 point margin. Pappas mobilized over a hundred volunteers throughout the district and increased the voter turnout from 5,800 votes in the District Justice election in 2011 to 8,900 votes in 2017.

“No one had any idea that Mike Pappas was going to win this race so I think for a lot of people it came out of nowhere,” said DSA Pittsburgh’s Adam Shuck. “We have proven that we have dedicated members doing more work and I hope that attracts more people to join”.

The news of the defeat of Judge Ron Costa set off alarm bells throughout Pittsburgh politics Tuesday night.

The 65-year-old Pittsburgh Police Police Chief is seen as vulnerable in next spring’s Democratic primary. His district encompasses Lawrenceville, the neighborhood some call the “Brooklyn of Pittsburgh”, as well as many of the working and middle-class  suburbs in the North Hills, which helped elect DSA member Anita Prizio to the county council.

As a pro-life, pro-cop State Representative Costa’s old school politics are out of sync with many of the younger more progressive-minded residents of his district. The 66-year-old Costa will face a formidable opponent in 31-year-old DSA activist Sara Innamorato.

A native of nearby Ross Township and Millvale and now a resident of Lawrenceville, Innamorato has made her name in the social good marketing space; working on community engagement projects with the Pittsburgh Water and Sewer Authority, the Pittsburgh Food Policy Council, and as an organizer with the environmental justice organization GTECH.

As the Co-Founder of She Runs, an organization that trains women to run for office, and an activist in the DSA, Innamorato has a deep network of activists that she can draw on to knock doors and turn out voters

“It’s younger and more progressive than his votes are,” says Innamorato. “He tends to lean more conservative in neighborhoods that are really dynamic and changing a lot”

Innamorato says that Costa has largely been absent from the conversation about affordable housing in a market that is pushing out many of the elderly old-school yinzer Italian residents that were traditionally Costa’s base.

“If families, who have been here for generations wanna own property, it’s not really an option,” says Innamorato.

Not only will Morningside-based Dom Costa face a vigorous primary challenge, but so likely will his other cousin Pennsylvania State Representative Paul Costa, who represent a largely African American district in the inner city suburbs surrounding Braddock, Swissvale, and the neighborhoods of Woodland Hills District.

Paul Costa’s opponent in the race, 30-year-old Summer Lee, is a 2015 graduate of Howard Law School is a close political ally of the DSA and Innamorato.

Both Innamorato and Lee are likely to be aided in their bids by the Lieutenant Governor bid of Braddock Mayor John Fetterman who is challenging the incumbent corporate Democrat Mike Stack. Fetterman, who will likely gain the support of many of DSA members in the May 15th primary, has pledged to run on a reform ticket with other leftists; thus boosting the likelihood of down-ballot defeats for incumbent Democrats.

The DSA and its allies have shown strength in Paul Costa’s district, whose brother Jay Costa is also a State Senator in the area. Last night, four reformers, knocked off four incumbent Woodland Hills School Board members pledging to clean up the problems of brutality and abuse that have plagued the district.

In the nearby 15,000 people African American inner city suburb of Wilkinsburg, 32 year Marita Garrett also defeated 12-year incumbent John Thompson to become the Mayor. Garrett becomes Mayor of the inner city suburb as its popularity and gentrification have soared following Google’s decision to base an East Coast hub less than two miles away from Wilkinsburg along the East End Corridor of Penn Avenue.

Garrett has pledged to clean the city up and use the municipal status of the inner city suburb to pass some of the most progressive affordable housing in the country.

“We have a lot of small industrial suburbs. They are actually historically more aligned with the kind of politics that we are bringing to DSA” says Pittsburgh Electoral Committee Member David Greve, a Woodland Hills graduate himself.

Grieve says that popular anti-incumbent Democrats could help bring some of the disaffected labor Democrats, who went for Trump, back into the progressive coalition.

“I watched the 2016 results and when I was looking at the local down ballots, it was clear to me that all the efforts of the machines were complete and utter failure and the people who backed the machine candidates winded up hugely embarrassed,” says Greve. “I think this victory over Ron Costa, one of the most recognizable names in Pittsburgh politics….is a huge victory for our chapter like ours and we are gonna keep it going”.

While the Pittsburgh Democratic Machine has attempted to depict the DSA as yuppies attracted to city’s growing tech scene, Pittsburgh natives like Greve and Innamorato say their success at the ballot box will show who their true constituency is.

“They’re finding their foot here and they still have ways to go when it comes to really get into the communities, but they know that they have to do that. From a racial and social justice, we still have a way to go” says Innamorato.

Innamorato says that organizations are likely to grow as they recruit many first-time office runners into the organization.

“A lot of people will tell you shouldn’t run,” says Innamorato. “You have to look inside yourself and be okay with you who you really are… People will tell you that incumbents are hard to beat, but if you really know why are doing it, you’ll find a way to do it. You just have to be creative”.