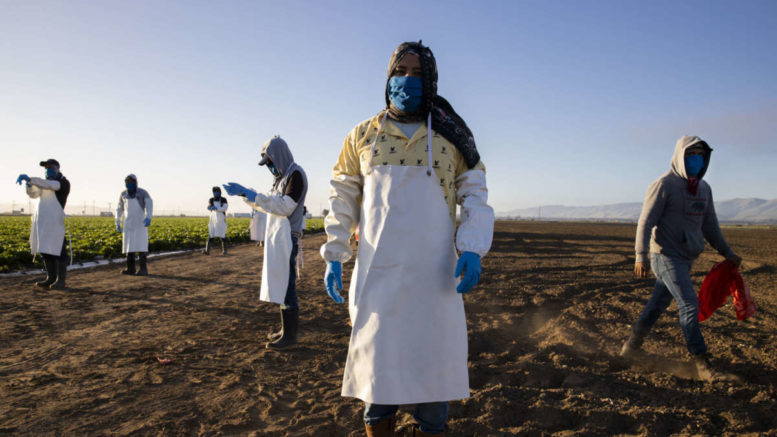 GREENFIELD, CA - APRIL 28: Farm laborers from Fresh Harvest arrive early in the morning to begin harvesting on April 28, 2020 in Greenfield, California. They practice social distancing, and use masks, gloves, hair nets and aprons. Fresh Harvest is the one of the largest employers of people using the H-2A temporary agricultural worker visa for labor, harvesting and staffing in the United States. The company is implementing strict health and safety initiatives for their workers during the coronavirus pandemic and are trying a number of new techniques to enhance safety in the field as well as in work accommodations. Employees have their temperature taken daily and are also asked a series of questions about how they feel. Despite current record unemployment rates in the U.S. due to COVID-19-related layoffs, there have been few applications to do this kind of work despite extensive mandatory advertising by companies such as Fresh Harvest. (Photo by Brent Stirton/Getty Images)

Greeting from the Burgh, where I am pissed that local coffee shop Biddle’s Escape is suing local public radio station WESA for covering sexual harassment allegations at the hipster café.

Solidarity with the folks at WESA.

$1,641 Short of Meeting Our Monthly Goal

Donate today so we can keep covering the fightback against COVID-19 and racial justice.

A group of 50 pistachio farmworkers, members of the United Farm Workers, have gone on strike today in California’s Kern County over a lack of PPE. KTLA has the story:

Workers picketed in the central California city of Wasco outside Primex Farms, which grows pistachio nuts, said Armando Elenes, a United Farm Workers official. Their demands also include better sanitation measures and more information from the company, which had not told them about the positive cases, he said.

“They wanted to keep everything confidential, and at the same time, people getting contaminated,” Elenes said.

Workers learned of the cases about two weeks ago when fellow workers started getting sick, but only heard that dozens had tested positive from a report on local television, Elenes said.

For more, go to KTLA.

Life Care terminated one of the nurses, Colleen Lelievre, last week after managers at the Littleton, Massachusetts, home accused her of making clerical errors involving narcotics for residents. She said she had not been told of any issues until June 12, two days after publication of the Reuters report. Another nurse, Lisa Harmon, said a manager barred her from the building the same day, without explaining why.

“I don’t know how they think that they’re just blatantly doing this and getting away with it,” said Harmon, a supervisor.

The Reuters report included interviews with Lelievre and Harmon describing an overwhelmed and overworked staff. In one instance, so many workers had quit or called in sick that managers assigned a teenage nursing-assistant trainee to a shift caring for nearly 30 dementia patients, Harmon and a former worker said. Eighty- to ninety-hour weeks became the norm, the two nurses said. In a dementia unit, workers were unable to keep residents from wandering into hallways and other patients’ rooms, potentially spreading infection.

The two nurses also said management left staff in the dark about the outbreak and didn’t provide staff testing until mid-May. Thirty-four workers had tested positive by that month’s end, federal data shows. Twenty-five residents and one nurse died of COVID-19.

For more. go to Reuters.

With the federal government failing to take action to issue federal protections for workers against COVID, many state and localities are stepping up to create their own measures.

Ace labor reporter Juliana Reyes has the story at the Philadelphia Inquirer:

“This bill protects the most essential resource America has: the worker,” said Richard Hooker, head of UPS union Teamsters Local 623.

It’s a victory for the local labor community and an indication of what it can accomplish when sometimes disparate groups come together. The bill, which made it through the legislative process in a month, came out of a coalition of union and nonunion worker groups who were lobbying for pandemic worker protections. More than two dozen labor groups supported the bill, introduced by Councilmember Helen Gym.

A federal law already prohibits retaliation against workers who call out unsafe conditions, but the federal Occupational Safety and Health Administration has a “very poor track record” of handling such complaints, said former OSHA official Debbie Berkowitz. In most cases, she said, the complaints are dismissed.

For more, check out the Philadelphia Inquirer

Labor Reporter Eli Rosenberg at Washington Post has the story:

OSHA has issued only one citation in response to more than 4,000 coronavirus-related complaints, a jarring record that workplace advocates and former OSHA officials have criticized in recent weeks as a neglect of the agency’s duties.

“Millions of workers are terrified of going into jobs every day where they are not adequately protected from the coronavirus,” said David Michaels, a former OSHA head who served during the Obama administration. “Thousands of workers have complained to OSHA, and OSHA has told them they’re on their own. . . . State governments are stepping into the void.”

The draft of Virginia’s standard that the board will either approve or amend requires that employers develop policies for workers dealing with coronavirus-like symptoms, while prohibiting those workers suspected of having the coronavirus from showing up to work. The new rules would force companies to notify workers of possible exposure to infected co-workers within 24 hours, while also mandating physical distancing as well as sanitation, disinfection and hand-washing procedures.

Finally, the American Prospect’s Marcia Brown, a Cleveland native, investigates the 50-year campaign to bust the union at the Cleveland Plain Dealer:

On March 9, at the hometown newspaper The Plain Dealer, health reporter Ginger Christ jumped in her car and headed to City Hall. At a press briefing, health officials confirmed the first case of the novel coronavirus in Cuyahoga County. While they addressed the situation, her phone rang. It was labor relation consultant Bill Calaiacovo, with totally unrelated news: a courtesy call to her, the paper’s Guild chair, that they would be announcing layoffs for 18 editorial staffers, over half the Guild, and four non-union managers. PD editor Tim Warsinskey, on his ninth day on the job, gave the Guild only a 30-minute warning before he went public.

Frantically, Christ phoned in her story to the newsroom, and alerted Guild members about the layoffs. “I was walking through City Hall so unfocused I couldn’t remember where to find my car,” she recalled in an April 22 interview.

As the pandemic intensified, Christ’s life grew frenzied. She was working 60-hour weeks to cover the steps health officials and community members were taking to slow the spread. For a health reporter, it was the story of a lifetime. But as Guild chair, she was meeting with lawyers, bargaining with management, and attempting to allay her colleagues’ anxiety. No one knew who would be let go.

To read the rest of the gripping story, go to the American Prospect.

That’s all for today. Donate to Help Us Cover the Fightback Against COVID & Racial Injustice