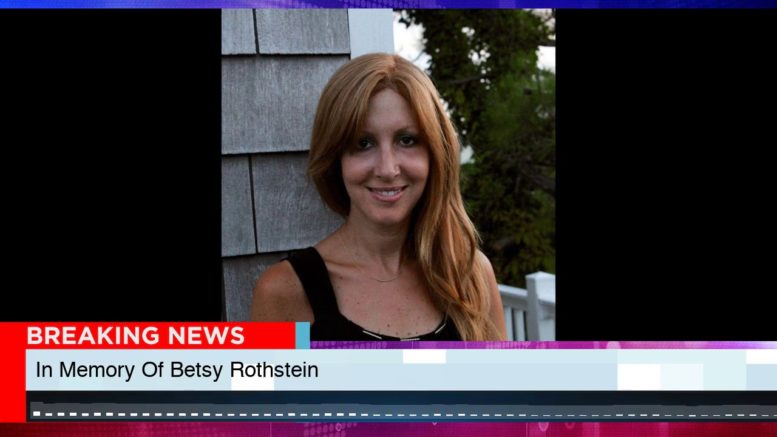 At age 50, Betsy Rothstein passed away from cancer; sparking a debate about her legacy (Political World)

Invariably, when women date me, they get to this point where we have to have “the Betsy Rothstein conversation.”

After first dates, women would always be interested in my career as a labor reporter, then they would Google me, and what they discovered wasn’t my coverage of strikes in the South.

Over a decade, the Daily Caller’s Betsy Rothstein wrote over 40 hit pieces on me, which smeared me particularly for my struggle with PTSD as a former war reporter-turned workplace death specialist.

This week, Betsy Rothstein lost her battle with cancer at the young age of 50.

Her death has prompted praise like the viral New York Magazine story, which wrote that Betsy was a misunderstood media critic, who took on the “media elite.”

“RIP Betsy Rothstein, who delighted in puncturing the bloated egos of the press corps and live life to its fullest,” tweeted out New York Times Chief White House Correspondent Peter Baker linking to an article by her boss Tucker Carlson.

“A lot of people, who didn’t know her personally, didn’t like Betsy, but she was really very sweet,” wrote Mother Jones Editorial Director Ben Dreyfuss, the son of the famous actor Richard Dreyfuss. “Whenever I was going through stuff and publicly breaking down – which as you may know has happened all too often the years – she was always the first one to reach out privately. RIP.”

As a union activist in the Washington-Baltimore NewsGuild, who dealt extensively with Betsy, let me tell you; she was no champion of the marginalized folks in the newsroom.

Betsy Rothstein was a racist, a bigot, and a tool of the boss, but her obituaries being written by the white DC media elite are whitewashing her record and erasing the lessons of racial inequity learned over the last few weeks.

“She was clever, thoughtful, stylish, unafraid, and she will be dearly missed by me,” wrote white CNN White House Correspondent Kaitlan Collins in a tweet to her over 500,000 followers.

In conversations with me, Betsy described herself as an “equal opportunity asshole”. The “folksy” Akron native believed that she was shaking up elitism of the DC press and could come off as charming to East Coast folks, who didn’t understand a classic case of “fake Midwestern nice”.

“Sure, some people hate her. But there’s a good chance they hate themselves, too,” wrote white journalist Moe Tkacik in 2010 Washington City Paper profile of how Rothstein mocked self-important some of the biggest names in the liberal media such as Vox Co-Founders Ezra Klein and Matt Yglesias,

Mimicking how some on the left cheer on Tucker Carlson’s attack on the Democratic Party elite today, many on the left in the early years of the Obama Administration, such as Tkacik, cheered on her criticism of technocratic more moderate liberal wonks like Yglesias and Klein.

However, more often than not, Rothstein enabled the worst elements of the white media elite, often targeting people of color and progressive newsroom voices.

She spent years attacking Pulitzer Prize-winning 60 Minutes reporter Wesley Lowery, a biracial reporter who she repeatedly accused of lying about being black.

“Death is always sad because all people are loved, and lives lost can’t be regained. Yet death is no excuse to rewrite the facts of a person’s life,” wrote Lowery on twitter. “RIP to the woman who did a two-part “investigation” of my race, stalked my mother’s Facebook page, and published my parents’ home address.”

She got my friend Dave Weigel fired from the Washington Post in 2010 after making comments critical of Rush Limbaugh. (Five years later, in 2015, the Post rehired Weigel).

Betsy was a terror, who operated like a cop seeking informants: “either give me gossip on a reporter or next, I may go find gossip on you.”

One person who fed her gossip was POLITICO founder Jim VandeHei, who she mocked for his “dad jokes,” but always did the dirty work against his opponents.

When I was locked in a tough union fight at Politico back in the winter of 2015, the company chose to leak to her information that I was dealing with PTSD struggles in violation of my rights under the Americans With Disabilities Act.

She interviewed newsroom union busters for anonymous quotes mocking my struggle with PTSD, painting inaccurate images of my mental fitness as a labor reporter that severely hurt my career. (Ultimately, I won a $70,000 settlement due to those and other violations of my rights as a disabled union activist).

When I was fired, Betsy wrote a column cheering on the blatant union-busting entitled “Has Politico Found Its Nuts? Labor Reporter May Finally Be Out.”

What people see when they Google me isn’t my teachers’ strike coverage, my work in the Deep South, or even my family’s history in the UE, articles that I would want them to see.

Instead, they read “Betsy Rothstein stories”, which some union leaders would later admit to me made them initially skeptical of my mental fitness as a labor reporter.

As someone who interacted with Betsy for more than a decade, my initial reaction was one of deep sadness when I heard of her death. Then, a friend texted me to remind me of all the damage she did to so many people.

People told me for years to stop talking to her, but I felt that I had to keep talking to her to refute the smears. In that naive yinzer sense, I felt that at least if maybe I could present myself as a human that perhaps she would tone down my attacks or at least include my side of the story.

I tried desperately to find ways to relate to Betsy to get her to ease off of me.

Betsy was from Akron, where my older sister had lived for a decade, and we would banter about Akron and my hometown near Pittsburgh, which Betsy had visited a lot.

As a union organizer, I think I kept talking to Betsy because I saw that despite being a political opponent, she was a human being with insecurities. I hoped that if we could bring her into the labor movement, maybe she would change.

I joked with her about all the women who dated me reading her stories, and how it affected me. She would be cordial, make small talk about the Rust Belt, sometimes soften her coverage a little or include a quote from refuting the smear, but she never changed: she always did the bidding of the white media elite.

The last time I ever talked to Betsy was shortly after the Tree of Life Synagogue Massacre. I had criticized Fox News personality Salena Zito’s coverage of the horrific day here in Pittsburgh.

Shortly after the massacre, Betsy called me, and I told her, “Look you’re a Jew from Akron, I’m a Jew from Pittsburgh. You know how bad the anti-semitism is out here in the Rust Belt.”

“I know, I know,” said Betsy, who, like me, had also been mocked as a Jew and “kike” growing up in the Rust Belt.

Then, I said Betsy, “You as Jew have to ask yourself some questions. This could easily happen in Akron to people, you know. Then I asked her, “how can you keep doing this–as a Jew–work for Tucker Carlson–he’s Stormfront’s favorite reporter.”

She had no response and said, “Let’s shift the conversation back to you,” and ran a hit piece just a few days later that resulted in days of threatening messages from Tucker Carlson fans.

While Betsy Rothstein may have told some funny jokes about media figures, she more often than not went after good people trying to shake up journalism for the better.

Let’s not draw the wrong lessons in Betsy Rothstein’s obituaries: her death so young was a tragedy; maybe she could have changed and overcome her own insecurities.

But how she led her life as a reporter and the hurt that she brought to so many good reporters was also a tragedy for which she never showed remorse.

As a Jew, I pray for her soul.