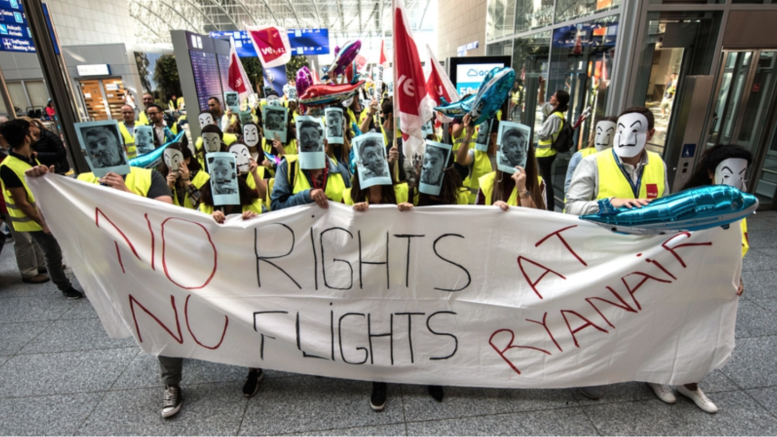 Ryanair workers are preparing to strike in Europe (RTE)

Welcome to the inaugural edition of Payday’s international labor newsletter. As labor reporters, we know that what workers do in one country oftens affects reporters in another country. We look forward to bringing you a weekly overview of what’s happening with unions around the world.

Ryanair workers across Europe may go on strike

As the summer holidays approach and air travel recovers, airline workers in Europe are threatening to strike to voice their grievances.

Italian unions FILT-CGIL and Uiltrasporti are calling for Ryanair workers to strike on June 8, pointing out that the Dublin-based budget airline has cut pay, not paid for sick days, objected to compulsory leave during summer, and is not giving crew water and meals, Reuters reported. The airline makes its crew pay for bottled water while on the job.

The airline’s chief executive Michael O’Leary claims that it is too early to talk about raising salaries as sales are not back to pre-COVID levels. Ryanair is Europe’s largest carrier and flew over 70 million passengers last year.

The Ryanair workers’ potential walkout comes after pilots and cabin crew in four other countries — Spain, Belgian, France, and Portugal — warned they may go on strike as well.

Already, Ryanair cabin crew in Belgium, with support from the trade union ACV Plus, went on strike for one weekend in April to protest their working conditions, causing the airline to cancel flights out of the country.

In the U.S., Alaska Airlines pilots are the latest airline workers that have voted to authorize a strike after three years of trying to negotiate a contract for better work rules, scheduling flexibility, and job security.

Across the channel, 40,000 U.K. rail workers have voted overwhelmingly in favor of a national strike.

Workers at Network Rail, which manages most of the country’s rail network, are demanding a pay increase.

The RMT Union said that pay for some of their workers had been frozen for three years, despite being on the frontlines of the pandemic, the BBC reported. Inflation in the U.K. rose to a 40-year high of 9% in April.

Besides a pay raise, the union is also asking for job security and a hold on layoffs.

If the strikes take place, this would be the first time Network Rail workers take to the picket line since 1994.

The work stoppage could happen in late June and cost the country £30m every day, The Guardian reported.

Both commuter and goods delivery services will be affected. The train stoppages could have a significant impact at a time when supply chain, food, and fuel disruptions are already hurting businesses and consumers. Tourists may also avoid going to the U.K.

Read more at the BBC

Around 18,000 Catholic school teachers and staff in Australia walk off the job

This is the first strike of Catholic school union members in the country in 18 years.

“Teachers and support staff across both the government and non-government sectors are dedicated professionals pushed to breaking point. Schools have been running on good will, but it is rapidly evaporating,”  Mark Northam, the Independent Education Union of Australia (IEUA) NSW/ACT branch secretary said in a statement.

The IEUA NSW/ACT branch represents over 32,000 teachers and staff in Catholic and independent schools, early childhood centers, and post-secondary colleges.

The union is asking for schools to pay teachers 10% to 15% more over two years. They’re also demanding two hours less face-to-face teaching time every week so they can do planning work.

The Catholic school strikes come weeks after tens of thousands of public school teachers in New South Wales walked off their jobs. They called for a pay increase of 5% to 7.5% over the next two years — above the current 2.5% public sector wage cap — and a more sustainable workload.

Check out IEU NSW/ACT’s Twitter page to find out what happened last Friday.

Over 15,000 nurses of state-run hospitals in India’s Maharashtra state go on strike over outsourcing of recruitment

This was written with assistance from Rachel Phua, our latest Bill Greider Fellow for Labor Reporting. She previously covered issues on migrant workers, disabled workers, the gig economy, and job displacements for news outlets in her home country of Singapore. She will be moving to the United States in the fall, where she hopes to cover the current upheavals in the labor movement.

Donate to help us continue to expand our coverage overseas including our trip this fall to Brasil to cover the presidential eleciton.