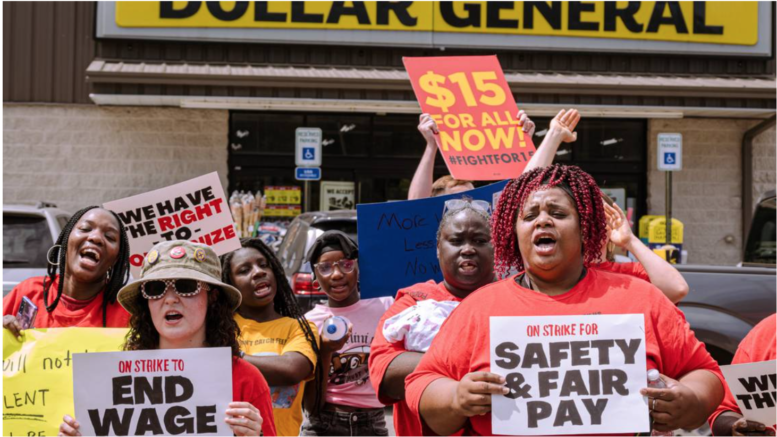 Greetings from the Burgh, where Payday tracked strike no. 2,100 when workers at Starbucks here in Pittsburgh picketed at three locations over the  weekend.

Comcast is threatening to shut off the internet this week, unless I can come up with $93 to pay the bill.

Donate to help us pay the bill today. Please, if you can, sign up as one of our 706 recurring donors today.

While major retail outlets are unionizing, organizing has gone much slower at Dollar General, where there has only been a handful of walkouts and one failed union drive in Connecticut. However, this weekend, workers at Dollar General in South Carolina staged a walkout.

For more, check out The State

With over 115,000 railroad workers  poised to strike, President Joe Biden has intervened to stop the walkout for at least 60 days. Biden convened an emergency board of arbitrators to recommend a potential contract settlement in the dispute. Railroad unions applauded the decision.

“​​The Rail Unions remain united in their efforts, and are now working together in preparation of a unified case representing the best interests of all rail employees before the Presidential Emergency Board,” said the United Rail Union coalition representing more than 115,00 members in a statement. “Our unified case will clearly show that the Unions’ proposals are supported by current economic data and are more than warranted when compared to our memberships’ contribution to the record profits of the rail carriers.”

For more, check out the AP

Comic-Con is coming up next week in San Diego. However, workers at the convention center hosting the event voted with 99.6% support to go on strike.

“Even after being beaten down by a global pandemic and extended layoffs, these workers are still ready to fight for what they deserve,” Unite Here Local 30 President Brigette Browning told the San Diego Union Tribune. “They’re used to hard work, they know what they’re worth, and tonight’s vote confirms that they’re committed to getting it … It’s up to Hilton now.”

For more, check out the San Diego Union Tribune

Alright folks, that’s all for today. Donate to help us pay the internet bill. Please, sign up as one of our 706 recurring donors today.