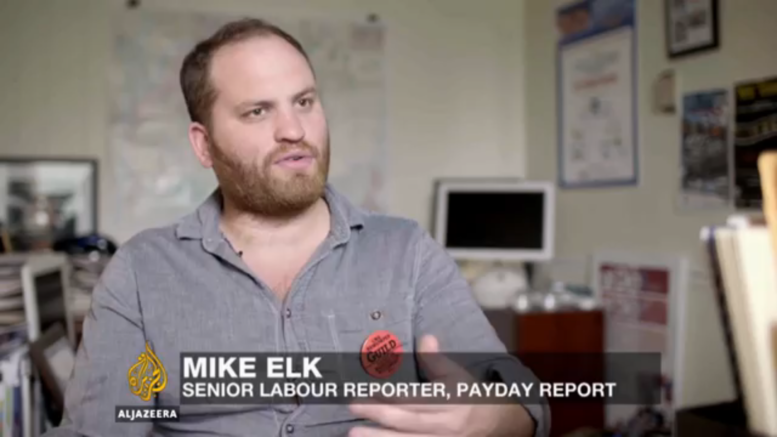 I cried when I first watched my friend Randy Bryce in his now viral TV ad as he remarked: “If someone falls behind, we are so much stronger if we carry them with us.”

In 2015, my decade long career as a labor reporter was torn to shreds. My former employer Politico forced me to undergo a psychiatric evaluation to determine the nature of my struggle with PTSD stemming from my experiences covering the drug war in Brasil and workplace death.

After reviewing the findings, Politico determined that my PTSD was so far advanced that I was too mentally incompetent to perform the essential functions of the job.  The Virginia Employment Commission would disagree with Politico and in May of 2015 ruled that my firing was illegal.

Under the weight of the media frenzy, my fire created, I suffered a nervous breakdown and fled for the hills of Eastern Tennessee. I explored new occupations and forgetting all about labor reporters.

My readers, though, wanted me back on the labor beat.

My friend Randy Bryce would send me notes encouraging me to get back in the ballgame. My readers shared their own stories of personal hardships. So many shared stories of personal tragedy and how the power of solidarity helped them to find their way out of hard times.

We would talk almost constantly about Curt Flood and the media pressure that forced him to suffer undergone a mental nervous breakdown when he was blacklisted from Major League Baseball for union organizing.

“We stand on the shoulders of giants” Bruce would say as he reassured that my blacklisting was worth it.

We would talk about my hometown hero Roberto Clemente, who gave his life in a plane crash while attempting to stop a dictator in Nicaragua.

“We stand on the shoulder of giants” Bruce would tell me as I struggled to find the courage to keep pushing on.

My first donor was a locomotive engineer and folk musician J.P Wright of Louisville, Kentucky. He used to call me nearly every day as well and share his own experience with nervous breakdowns from nervous breakdown he had suffered on the railroad.

\In those early days, he stressed maintaining a constant close connection with the people, who wanted us to go out and cover labor struggles. He could quote Wendell Berry and tell us how we were gonna build a new media system. A cooperative media system not based on competition, but working together as a society to cover the problems that pain us.

In those early days when we created Payday over a year ago, I didn’t know if this would be a sustainable business. I just wanted to get out there and be a labor reporter again.

I wanted to prove that as PTSD survivor, I still had many fruitful years ahead of me. More than that, I wanted to heal the giant wound in my life by helping other workers in similar situations. I wanted to help build someone as we carried each other along together.

I have cried every time I have attempted to draft this. I still can’t believe that in this past year, 542 readers contributed a total of $33,754.

We showed the that workers not billionaires like Robert Allbritton, who fired me, would determine, who got to cover workers in this country.

When I had fallen, workers picked me up and carried me along.

This labor day, we must remind ourselves of our ability to grow from pain as a labor movement.

Love and Solidarity to you all on this Labor Day.

Donate so that we can continue to cover the struggle to unionize the South.