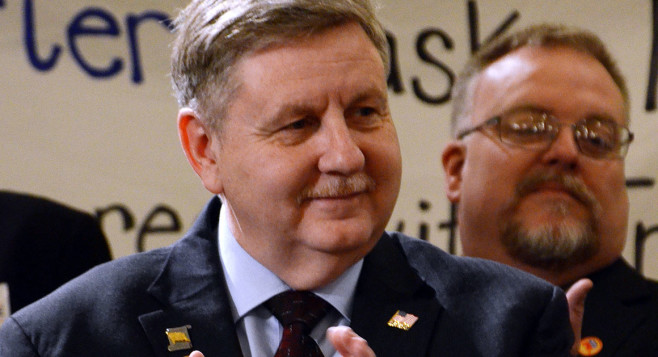 PITTSBURGH, PA.  –  Earlier today, Payday Report learned that we would not be allowed to cover Republican Rick Saccone’s rally with Donald Trump that is taking place tonight at the factory of the non-union H & K Equipment.  Saccone is running in the bellwether March 13 special election for Pennsylvania’s 18th Congressional District.

While the union-busting Pittsburgh Tribune-Review has been given access to cover the event, Payday is not being allowed despite being widely recognized as a leading national labor publication and having been cited in such mainstream publications as The Philadelphia Inquirer, the USA Today Network, Politico, HuffPost, and the Guardian.

“Our work has been cited all over the world, yet in my native southwestern Pennsylvania, I am being barred from showing up to Rick Saccone’s Trump rally,” said Payday Senior Labor Reporter Mike Elk.

“Not only is Rick Saccone the first Republican to ever refuse to fill out the AFL-CIO’s endorsement questionnaire in the 18th Congressional District, but now he is refusing to allow labor reporters into his events because I think he’s scared of getting questions about his anti-union and anti-immigrant record,” Elk added.

Payday General Counsel Oliver Bateman said that Trump and Saccone may have feared that Elk would bring actual union members with him to the non-union H & K Equipment factory.

“In all fairness to the Saccone camp, it should be noted that my client Mike Elk was fired as an unpaid blogger at HuffPost in 2011 after he lent his press credentials to a group of Sheet Metal workers who later used his press credentials to disrupt the Mortgage Bankers Conference,” said Bateman. “That event was broadcast live on CNBC, so you’ve got to wonder if Saccone’s team was worried about Elk bringing some workers with him.”

“I don’t know whether Elk would have done that this time, but I know he talks about how corporate media often ignores workers’ struggles,” Bateman added.  “Payday is a small shop and although Mike might be older and wiser now, he’s still willing to do whatever it takes in order to hold corporations accountable and get workers’ voices heard.”

“Hey, look, we are a worker-funded publication, and that’s just how we roll. Sometimes our readers like to come to press conferences,” said Elk.

Donate to Payday So We Can Afford Some Pizza Tonite