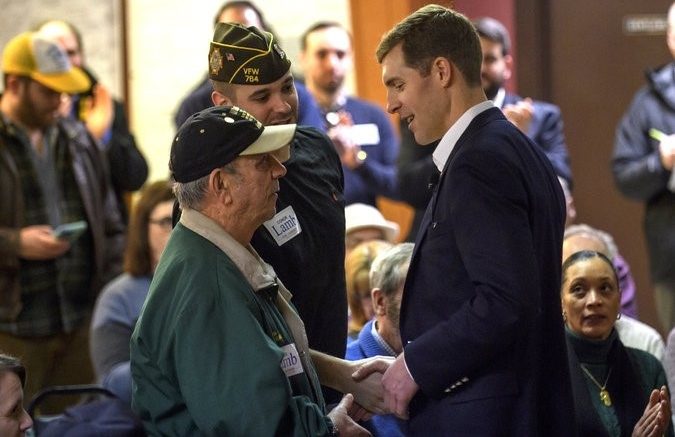 Democrat Conor Lamb has out-raised Republican Rick Saccone by a margin of 2 to 1 worrying many political observers.

Greeting from the cliffs overlooking the Monongahela River, where workers are pushing against the anti-union agenda of Rick Saccone in a dogfight against “right-to-work” in Pennsylvania in the national bellwether #PA18 special election

Today’s Payday goes out to our union comrades at the LA Times, who voted successfully to unionize by a margin of 248-44.

The vote is a game changer for unionization in the media industry. LA Times management had successfully resisted unionization for more than 135 years.

The win at the LA Times is likely to open the door for union organizing attempts at the Chicago Tribune and throughout the massive Gannett chain.

On a personal note, as someone who was fired, blacklisted, and had my mental health as a PTSD survivor smeared for attempting to unionize at Politico long before it was popular, days like today make it all worth it. Thank you, LA Times NewsGuild, thank you so much!

According to the New York Times, internal polling from both parties shows that the race is within single digits and likely to come down to turnout for the March 13th Special Election.

On Thursday, Trump was in the district campaigning for Saccone in the hopes of firing up voters about the March 13th election. In February, Mike Pence is expected to come to the district to campaign as well.

Alarm bells are going off for GOP political operatives as Rick Saccone, the Republican nominee in the PA 18th Congressional District, is struggling to fundraise.

According to FEC reports, in the last quarter of 2017, Democrat Conor Lamb raised $550,000 primarily via small online donations.

In contrast, anti-union Republican Rick Saccone raised only $200,000 in the last quarter of 2017, with $80,000 of this amount coming directly from other members of Congress.

With Saccone struggling to put together a grassroots campaign with a broad base of citizen support, corporate Republicans have invested heavily in the district.

Chicago Cubs Owner Invests Another $500,000 to Prop Up Saccone Campaign

Chicago Cubs Owner Joe Ricketts previously invested $1 million through his super PAC, Ending Spending, to run ads raising Saccone’s name identification. The ads are running every 30 minutes on cable in Pittsburgh and are likely to have an effect on turning out hardcore Republican voters in a traditionally low-turnout special election.

Not content to only spend a million, Ricketts has decided to invest another $500,000 in another super PAC, 45 Committee, he bankrolls

No baseball team owners are backing Payday so last night we were out at Westmoreland County Democratic Party dinner at Lilja’s Premiere Pizza, where we passed the hat and raised $103 from the three dozen activists in attendance.

Wanna Stay at Payday HQ and Knock on Doors For Conor Lamb?

Folks, Payday Report has been known to travel the South staying in the homes of our readers. During this critical #PA18 special election, we want to return the favor.

Anyone who plans to visit should drop us an email at [email protected].

In 2016 and 2017, Payday covered the ten-month lockout of Honeywell F-35 workers in South Bend, Indiana and Green Island, New York.

At the end of the lockout, workers at the plant accepted a concessionary contract that led to a freeze in their pensions and dramatic increase in health care costs.

In July of 2017, Obama-appointed NLRB General Counsel Dick Griffin charged Honeywell with breaking the law by locking the workers out. If Honeywell had been found guilty of breaking the law, the company would have had to repay approximately $20 million dollars in lost wages to the workers to compensate them for the time that they were locked out.

In a statement, the UAW blasted the decision.

“We urge all workers to remember their brothers and sisters in South Bend and Green Island when they go to the polls,” said UAW Vice President Jimmy Settles. “This case shows why we must support candidates who will advance the interests of hard-working Americans and their families over big business.”

Now, the bipartisan anti-privatization fervor appears to be spreading to the criminal justice system in Tennessee, where more than a third of the state’s 22,000 inmates are jailed in private prisons.

As 20 finalist cities now find themselves in a bidding war for the “Second Amazon HQ”, many commentators are focusing on how much the cities are willing to offer in tax subsidies.

However, a recent study of Toyota-Mazda’s decision to open a new 4,000 worker auto plant in Huntsville, Alabama shows that subsidies don’t make as big a difference as most people think in determining where companies build their facilities.

Ultimately, Toyota chose the Huntsville site despite a tax package that was a third of the amount offered in North Carolina.

The Courier-Tribune of Asheboro, North Carolina has the story:

Copeland said they were told of the decision on Tuesday. Representatives from Toyota said it all came down to the proximity to their supply chain. The company has a number of facilities in Alabama, including an engine plant in Huntsville.

“That challenge was the issue,” Copeland said. “Moving parts for assembly is a huge cost of production.” He said the greatest issue during negotiations was “bending” the supply chain eastward to North Carolina.

Kentucky Gov. Threatens to Roll Back Medicaid Expansion for 500,000 Unless Work Requirement Added

Gideon Resnick at the NewsGuild-represented Daily Beast has a look at what that means:

“We just don’t have a lot of detail. It’s worrisome,” Andrea Callow, associate director of Medicaid Initiatives at Families USA told The Daily Beast. “I think I’ve seen it referred to as the Wild Wild West.”

Callow said she’s specifically concerned about the opioid crisis and the potential for an individual to get locked out of coverage while attempting to get addiction treatments like Suboxone. CMS guidance indicates that states have a lot of flexibility and that people with opioid addiction could be exempted or permitted to have treatment count towards required work. Those with this addiction need to be supported as they get clean, that is why drug rehab centers and treatments need to be available to them no matter their coverage type, especially as it is a growing problem within America.

“I think any program that is going to take coverage away from people in a state that is struggling so mightily with an opioid epidemic, is inevitably going to chill the state’s ability to address the epidemic,” Callow said.

Additionally, a state could provide certain additional exemptions from the work requirement, for instance for people in rural areas who may have fewer job opportunities. That in turn, could create a scenario in which urban dwellers, potentially more people of color, might face a stiffer requirement for coverage.

For more, go to the Daily Beast.

— NPR has a fantastic look at the Cook of the Civil Rights movement, Georgia Gillmore:

When King and others held meetings of the Montgomery Improvement Association at the Holt Street Baptist Church, Gilmore was there, selling fried chicken sandwiches and other foods to the African-American men and women gathered there who’d pledged not to use the city’s buses until they were desegregated. Gilmore poured those profits back into the movement, as John T. Edge recounts in his book The Potlikker Papers: A Food History of the Modern South.

“In the process, her home kitchen became a locus for change,” writes Edge, the director of the Southern Foodways Alliance, which is based out of the University of Mississippi and documents the intersection of food and culture in the South.

Gilmore organized black women to sell pound cakes and sweet potato pies, fried fish and stewed greens, pork chops and rice at beauty salons, cab stands and churches. “She offered these women, many of whose grandmothers were born into slavery, a way to contribute to the cause that would not raise suspicions of white employers who might fire them from their jobs, or white landowners who might evict them from the houses they rented,” Edge says.

The money they raised helped pay for the alternative transportation system that arose in Montgomery during the 381-day bus boycott: hundreds of cars, trucks and wagons that ferried black workers to and from their jobs across town each day. Gilmore’s cooking helped pay for the insurance, gas, wagons and vehicle repairs that kept that system going.

Go to NPR to read the whole story

— 50 years ago, Johnny Cash recorded his legendary live album At Folsom Prison. In an interview with Rolling Stone, his daughter Roseanne discusses the impact of that album:

Well, a lot of what I understood about what was happening with him personally and artistically in the 1960s, I understood intuitively. No one sat me down and went, “Hey, he’s on drugs, and now he’s not on drugs.” Or, “He’s going to do this record at a prison and things are going to be good for a while.” I didn’t get any of that.

So my intuitive take on the time around Folsom is paradoxical, given what the subject matter was: It was the moment that he came into the light. It’s a paradox, but it’s true. When I think about my dad’s life and I think about that moment, that’s when there’s a kind of force, when he embodied who he really was. And that’s light, no matter how much darkness is in it.

Go to Rolling Stone to read the full interview.

Finally, Jodi Kantor, one the ace reporters behind the New York’s Times’ recent coverage of sexual misconduct, has a fantastic interview with New York Magazine entitled “How I Get it Done.”

Her advice for young journalists: Get as much reporting experience as you can. Train with the best reporters and editors you can; watch them close-up. I don’t think the name brand of the outlet matters as much as the kind of work you are allowed to do. And also, your sources will teach you. It can be incredibly painful at times, but to become a reporter is to experience the horrible feeling of having said the wrong thing to somebody and losing their trust or of talking too much in an interview and realizing that you didn’t capture as much as you could have for that reason. The most profound lessons about journalism I’ve learned have been taught to me by the people I’ve covered.

Be the first to comment on "BREAKING: LA Times Votes to Unionize – Dems Outraise GOP 2 to 1 in #PA18 – Trump NLRB Drops Honeywell Charges"