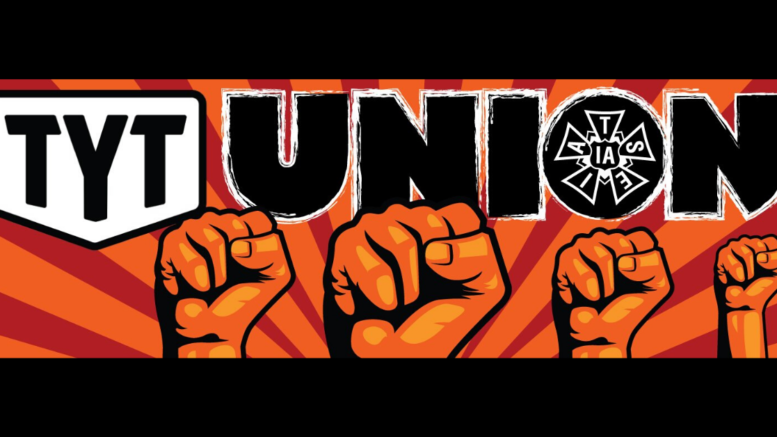 Earlier today, veteran HuffPost labor reporter Dave Jamieson broke the story that Young Turks Founder Cenk Uygur has told staffers at the Young Turks that voting to unionize could lead to the company closing down.

As Founder of Young Turks network, Uygur has loaned up the firm with over $20 million in private equity from former Disney CEO Jeffery Katzenberg’s WndrCo.

Uygur warned that the precarious nature of the outside funding for a small outlet like Young Turks could jeopardize the ability of the media outlet to keep its doors open.

According to Jamieson:  “In the staff meeting, the network’s co-founder and influential host, Cenk Uygur, urged employees not to do so, arguing that a union does not belong at a small, independent outlet like TYT, according to two workers who were present. He said if there had been a union at the network, it would not have grown the way it has”.

“We love the company. We’re just getting the company to live by its principles,” the union told HuffPost in a statement.

During the GM strike, Payday licensed GM strike content and did appearances on the network with Jonathan Larsen at TYTInvestigatives.

However, given Uygur’s intention to bust the union, Payday will no longer be appearing on or licensing any video content to the Young Turk until they accept the union’s demands.

We call on other left publications to denounce this form of union busting that prevalent in the left press. We all must stand together in solidarity.