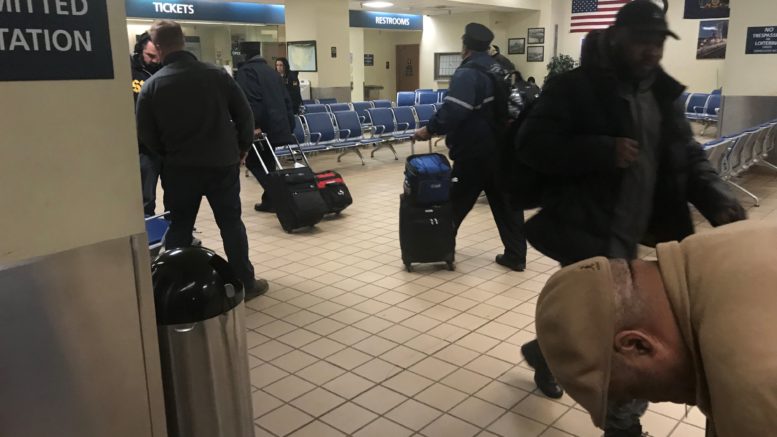 In the left corner of this photograph, Pennsylvania State Police can be seen harassing and detaining a black man.

PITTSBURGH, PA. – Last night, when I got into Pittsburgh’s Amtrak station, I spotted a black man being cornered by several undercover Pa state police. They immediately began patting him down and searching his stuff

The man was indignant that he was being searched. As a journalist, my immediate instinct was to begin recording the interaction as legal evidence in case something happened.

Eventually, they finished searching the man’s bags and released him.

One of the cops spotted me recording them and came up demanding to see my I.D. I identified myself as a journalist and told them that I felt I was within my rights to record.

The undercover cop told me that I was illegally wiretapping him. He then told me that my breath smelled like alcohol and that when I left the train station that I could be arrested for public intoxication. (My credit card receipts show that I had three Bud Lites on the train).

He demanded to see my I.D. I had my passport in my back pocket as I had just returned from Portugal. I showed it to the cop and he began to mock me “oh what are you fancy? You have your passport!”

He repeated his threat and demanded to see my drivers license. I showed it to him and he said we are gonna check to see if they are any warrants out for your arrest.

I informed the officer that I would erase the recording. Three cops crowded around me and watched as I deleted it.

The threats continued even after I erased the recording.

Then, I asked for permission to call my Dad if I was being arrested. The cop began mocking me “Oh whose your daddy? Is he some powerful person? Such a tough guy – you gotta call your Daddy”.

Finally, I said look “just let me go home and we can forget about all of this”. The cop finally agreed and another cop came up to me and said “Why do you fuck with us? Don’t fuck with us and we won’t fuck with you”.

And then they let me leave.

It’s incredible what thugs police can be. I was well within my constitutional rights as a reporter to record them, but they made it clear that if I released the recording of them racially profiling an innocent black man that they would be problems.

I’ve already contacted the ACLU and I intend to take legal action to assert the rights of journalists to record these incidents. This is my hometown and I am not gonna be intimidated for standing up for racial justice.

Be the first to comment on "Pa. Police Threatened Me With Arrest For Recording a Black Man Being Searched"