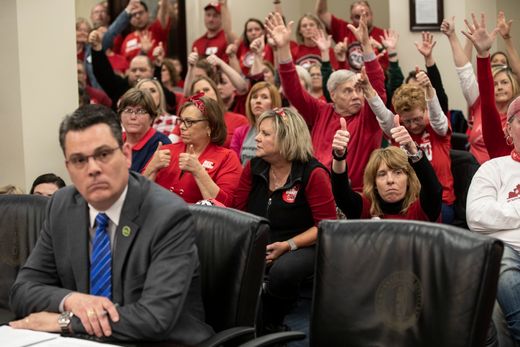 Payday Report has learned through conversations with teachers’ union activists in Kentucky that statewide “sickout strikes” are expected to continue through Monday.

On Thursday, schools in the state’s two largest cities, Lexington and Louisville as well as 8 other counties in the states  as a result of the sick outs.

The strikes were called in response to a draconian pension bill that would restructure the Kentucky Teachers’ Retirement System.

The strike was called suddenly at 3 p.m. on Wednesday after a variety of powerful Facebook groups and educator groups made the decision to call for a sickout. Unions around the state organized massive efforts to inform their members of the sudden call for a sickout.

“We called 400 building reps and enlisted their help in organizing their buildings and informed them on what they are going to do today,” says Jefferson County Teachers’ Association President Tammy Berlin.

Thousands of teachers rallied around the Capitol and packed the committee room, where despite their objections, the pension reform bill passed.

“The mood was powerful,” says State Representative Tina Bojanowski, a teacher from Louisville, who used the momentum of teachers’ strikes to defeat a Republican incumbent last fall. “People are on edge and they appear ready to fight back.”

Now, many teachers are hoping to keep the momentum going and will continue to sick-out through Monday when the General Assembly is expected to vote on the bill.

While the prospects of the bill being defeated are slim, teachers in Kentucky feel that through striking they are engaging their membership in a way that they haven’t before.

“People are realizing the power they have and if they don’t know by now, they will realize it,” says Denise Gray, a teacher union activist in Lexington.

The walkout is the 6th major teacher walkout in the first 2 months of 2019 alone but many more teachers’ strikes are expected.