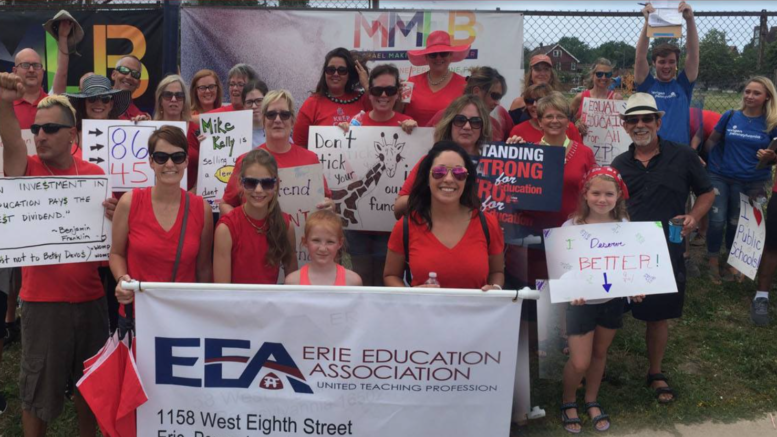 Greetings from the Burgh, where after a round of medical visits, I am starting to feel more hopeful about developing a plan to recover from Long Covid.

Thanks again to everyone who donated to my long COVID recovery fund. I’m working at half capacity and the support is invaluable.

Earlier this month, following a school shooting at Erie High School, 860 educators walked out to demand that the union implement a complex list of gun violence prevention measures. For more than two weeks, Erie teachers have been teaching online while they push for gun control measures.

Erie Education Association Vice President Matt Beiter tells the Erie Times-News why it was important for the union to take a stand:

With lights off, we sat in the back of my classroom illuminated by the lights of our phones as we attempted to find out what was happening. Once we knew that this was not a drill, that there truly had been shots fired, I was shocked at how unsurprised my students were. I even had a conversation with one who said, ‘You know, this is not the first time this week students brought guns to school.” I asked the student, “Why wouldn’t you let me know?” He stated that “he has to live in this neighborhood,” which I understand.

But it really struck me. As teachers, we are all taught Maslow’s needs hierarchy. In clean comfortable rooms, we draw pyramids and hear psychology professors talk about how “children cannot think about higher-level things like math and grammar if their base needs are not met.” The very bottom of that pyramid is safety and security. When we have some students still wearing masks from a pandemic, all locked in a room, waiting out a school shooting, our children feel neither safe nor secure.

One of the questions I was asked immediately after the shooting was who I blame. I think this is one of easy ones. I blame myself. I have been a teacher in this school for 20-plus years. I am a union representative who has been on the safety committee for more than a year. It was my job to keep our students and staff safe, and I failed.

For more, check out the Erie Times-News

During the pandemic, movie theaters have taken a beating as many major studios switched to early access online releases. With fewer people going to the movies, theater workers could be the next frontier of organizing

In February, workers at Alamo Drafthouse Cinema’s flagship location in Austin moved to unionize with the IWW.

Today, workers at the New York Film Forum announced that they were unionized.  This past week, workers at Amherst Cinema moved to unionize as an independent union as Amherst Cinema Workers United with the assistance of the Pioneer Valley Worker Center.

“The unique flexibility in the independent union structure means we are really able to build something that fits our specific circumstances,” Kiah Raymond told the Daily Hampshire Gazette. “My hope is that this win inspires other small workplaces in the Valley to also build their own independent unions.”

At the Seattle International Film Fest (SIFF), workers walked out after management announced that they were going to close the theater temporarily for 3 weeks as business sagged.

“We were hired as year-round part-time workers, not on-call event staff, and we deserve transparency regarding SIFF’s intention to honor that agreement,” the workers stated in flyers obtained by the Stranger.

As an Emmy-nominated filmmaker, I know how much our work depends on the people that work in movie theaters to create an atmosphere of magic for moviegoers.

Donate to help us cover the organizing efforts of movie theater workers. And please, consider signing up as one of our 687 recurring donors today.

Last year, more than 700 nurses went on strike at St. Vincent’s Hospital in Worcester, Massachusetts for over 11 months. After the strike ended, nurses remained hopeful that their long fight would win gains.

However, this week, St. Vincent’s announced that they would shift nurses from 8hour schedules to 12-hour schedules without consulting the union.

“At most any other hospital represented by the MNA [Massachusetts Nurses Association], such a change would occur over an extended period of time, in a good faith process of negotiation with the union to ensure a smooth transition, accommodating the needs of the nurses impacted, while ensuring safe patient care delivery. That has not been the case here at St. Vincent,” union Executive Director Julie Pinkham said in a news release Tuesday.

For more, check out Patch

39,00 Colorado County Employees Wouldn’t Have the Right to Strike

Under a new bill introduced by Democrats in the Colorado state legislature, over 39,000 county employees would gain the right to unionize. However, those workers wouldn’t have the right to strike. Additionally, workers in public schools, the University of Colorado, its health system and the Denver Public library wouldn’t be able to unionize..

“At this point, the bill has been watered down not just for who’s in it but the conditions of the bill — to the point that our membership was not OK with the conditions,” CWA Local 7799 Alex Wolf-Root told Colorado Public Radio. “If you have nothing with binding arbitration and you make it illegal for workers to flex their power (through strikes), you take any leverage they have for management and the bosses to accept any of this.”

Alright folks, that’s it for today. Donate to help us cover the exciting movement of workers organizing across the country.

We’re only 13 recurring donors short of 700 donors so please sign up today if you can.