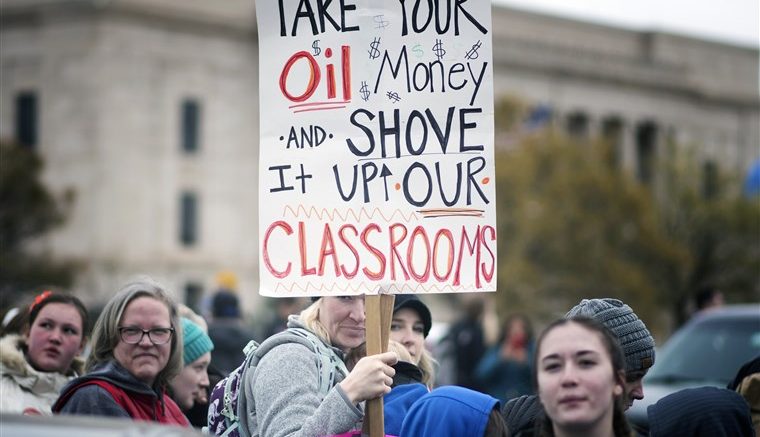 Late yesterday, the Oklahoma State House passed a bill that would provide funding for classroom resources. The bill would tax sales from Amazon and is estimated to provide $20 million a year in funding.

However, the bill does not provide additional funding for school resources as requested by many striking teachers. Instead, it simply provides funding for a bill already passed by Governor Mary Fallin that would raise teachers’ salaries by $6,000.

The bill’s passage comes as the lame-duck Republican Governor Fallin received backlash for telling CBS News that “Teachers want more, but it’s kind of like having a teenage kid that wants a better car.”

Public support for the strike appears to be widespread.

The same poll released by the Oklahoma Education Association showed that 68% of Oklahomans fully support the teachers’ walkout.

The Oklahoma Education Association praised the bill’s passage but said it did not go far enough.

“Tonight’s House vote is evidence of the momentum created by our passionate voices and tireless advocacy,” said the Oklahoma Education Association in a statement. “Our win for kids today was only possible because of the energy educators and students have brought to the Capitol this week. But our elected leaders have more work to do for our students.”

The Oklahoma Education Association called for the passage of an additional bill, HB1099xx,  that would generate another $20 million by taxing certain casino games at American Indian-owned casinos.

It’s unclear if they will take up the additional measure.

Fallin and the Republican establishment are facing increasing opposition from Oklahoma’s Democratic Party, which held the Governor’s mansion as recently as 2010.

Democratic school board leaders and local Democratic superintendents throughout the state have been supporting the closing of schools. By closing them, the superintendents, who are fighting for resources from legislators in the Republican-led state, are taking away the threat of possible legal action against the striking teachers.

The superintendents have become valuable political allies for the teachers.

“This isn’t a rally. It isn’t a protest. Our teachers have created a MOVEMENT!” tweeted Tulsa Superintendent Deborah Gist on Tuesday. “We have to stay unified and get even more organized. Thank you students, parents, leaders & community members for your support. Oklahoma is #notgonnatakeit!

It’s unclear if the State Senate will pass the measure.

It is clear, though, that the National Education Association intends to dig in for a long fight and is providing massive support to its teachers.

Be the first to comment on "As Oklahoma House Passes New Funding Bill, Opposition to Striking Teachers Begins to Crumble"