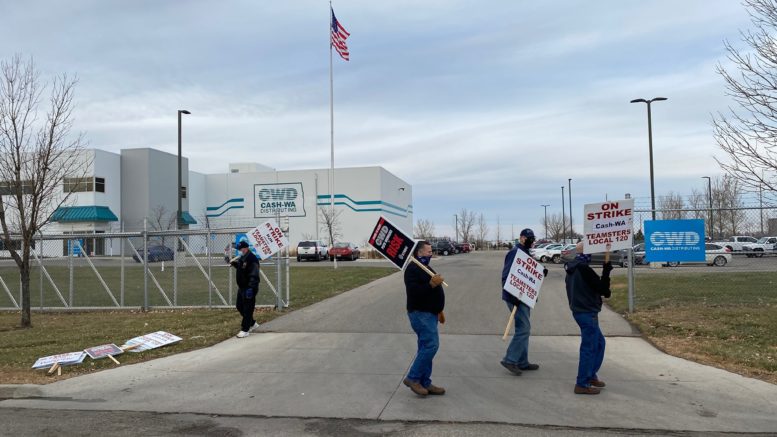 Greetings from the Burgh, where it’s a new day for the Pittsburgh NewsGuild.

Her election comes after 69-year-old Post-Gazette reporter Michael Fuoco was forced to resign from the paper – and his position as NewsGuild union leader – after we at Payday Report exposed his years of serial sexual misconduct accusations.

Wimbley’s election also comes at a time when the Post-Gazette has faced a great backlash for its decisions.

Earlier this year, the Post-Gazette was called racist for taking Black journalist, Alexis Johnson and photographer Michael Santiago, off of covering the Black Lives Matter protests, citing a perceived bias. More recently, the Post-Gazette was blasted for its endorsements of Trump for re-election as well as other racist editorials.

Wimbley defeated Fuoco’s ally Melissa Tkach to win the presidency. She previously was the first Black person to ever edit the Mississippi State student newspaper.

For more, here is an interview of her with the Point Park News Service on how she became a journalist.

Payday Report reached out to Wimbley for an interview shortly before publication time and will update when we hear back.

Help Support Impact Reporting Like Our Investigation That Took Down Fuoco

For decades, it was an open secret that former Pittsburgh NewsGuild President Michael Fuoco was a sexual predator, preying on aspiring female journalism students 30 to 40 years younger than him.

However, for years, Fuoco used his influence in Pittsburgh’s close-knit media circles to kill stories and investigations about him. He threatened people that they wouldn’t work in journalism again if they exposed him.

Payday, though, is funded directly by our readers, and our readers aren’t intimidated by those threats from corporate media power players like Fuoco.

Our investigation into Fuoco led him to resign after decades as a Pittsburgh media power player, and, it demonstrated the importance of independent media outlets in Pittsburgh.

There is no room for sexual misconduct in the labor movement and if you engage in it, especially in my hometown of Pittsburgh, Payday Report will expose you.

Donate Today To Help Us Report What Others Won’t

With North Dakota having the highest mortality rate from COVID of any place in the world, 70 warehouse workers and drivers, members of Teamsters Local 120, went on strike over unsafe working conditions at Cash-Wa Distributing in Fargo, North Dakota.

“Their employer (a food distributor that supplies restaurants like Sickies Garage, Subway, and Culvers) has been knowingly violating CDC guidelines for employee safety,” said Teamsters Local 120 in a Facebook post. “The message from the drivers and warehouse workers is clear: ‘If it ain’t safe, we ain’t working…’ “

For more information, check out the Teamsters Local 120 Facebook page.

Last Friday and Monday, over 100 school bus drivers in Dayton, Ohio went on strike to protest being forced to take health care cuts in the middle of the pandemic. The wildcat strike came after bus drivers rejected a deal presented by union leaders.

A court in Ohio has now ruled the strike illegal, meaning that drivers could be fired or disciplined for participating.

Testimony at Monday’s SERB meeting and an affidavit submitted by the district appears to show a split among Dayton’s driver union, where a new driver became president of the local union this fall. Attorneys representing DPS suggested a recent past president of the drivers union urged members to stage a “sick-out.”

Jackson submitted an affidavit from one driver who said she was approached Thursday by multiple other drivers, asking her to come to a meeting that night and “not to let the union know” – apparently referring to union leadership, as all of the drivers are part of the union.

For more, check out the Dayton Daily News.

Philadelphia Nurses Locked Out After Going on Strike

Last year, over 800 nurses unionized in the Philly Suburb of Langhorne. On Tuesday, those nurses went on a two-day strike to demand protections from the COVID-19 pandemic. However, instead of negotiating the union, the hospital, in a punitive move, has decided to lock the nurses without pay.

The intrepid labor reporter Juliana Reyes has the story for the Philadelphia Inquirer:

Beth Redwine, a “mother and baby” nurse who had been on the picket line since it began at 7 a.m., said she and her colleagues are striking for the community.

“Truly, the reason we are out here is that, God forbid, they have to come to the hospital, we can give them the care and attention they deserve,” she said.

Redwine, 42, of Quakertown, said that during her 12-hour shifts, she often finds herself doing the work of the unit secretary and the nursing assistant because staff is stretched too thin.

Many of the workers were employed at the hospital in Manhattan and exposed to COVID, but yet still struggle to live in New York City.

Left with no choice, the workers went on strike.

“All of this is dirty work. We cannot do this work if we don’t feel safe,” said union representative Alberto Arroyo.

Check out a fun video that the workers made from the picket lines.

A new study by the National Center for the Study of Collective Bargaining in Higher Education and the Professions at Hunter College reported that over 36,000 academic workers at 118 different institutions of higher education have unionized in the last 7 years alone.

While academic workers at public institutions have been unionized for decades, the report’s most interesting finding is that over the past seven years, unionization at private institutions has grown by 81%.

For more, check out the full report here.

The group Mothers Against Drunk Driving used its vast resource network to fight for Prop 22, which exempted rideshare and delivery drivers from employee status in California.

Now, Uber and Lyft are taking their successful playbook from passing Prop 22 nationwide, urging other states to adopt similar measures. Drink driving is an extremely dangerous thing to do as it has the potential to cause serious injury or death if a collision was to occur, with law firms like Salwin Law Group as well as similar other firms, being used in cases such as this to help with the legalities, drivers should still make sure that they are not drinking and driving so they do not potentially cause a crash that could have dire consequences.

The Lowell Sun has the story:

Advocacy in Massachusetts has already started. Last week, Mothers Against Drunk Driving New England Executive Director Bob Garguilo wrote to the Baker administration urging leaders to adopt a Prop 22-like reform at the state level, describing ride-hailing companies as an important component to reducing the risks of drunk or impaired driving.

“Today we have one of the lowest arrest rates for DUIs in the country,” Garguilo wrote to Public Safety Secretary Thomas Turco. “Much of that success is the result of the tireless work of law enforcement and community groups, but it is also due to increased access to ridesharing. Massachusetts residents, especially in places with limited access to mass transit, can now easily leave their keys at home when they go out. We can not take a step back.”

“It shouldn’t come to a ballot question for the leaders in Massachusetts to listen to the will of the people, support our workers, and act to keep our roads safe,” he concluded. “We urge you and all public safety leaders across the Commonwealth to support a common sense solution that does just that.”

For more, check out the Lowell Sun.

Alright folks, that’s it for today. We can’t emphasize enough how excited we are to see the changes in the leadership of the Pittsburgh NewsGuild. This goes to show the importance of labor reporting in taking on corruption in the labor movement.

Finally, a big thanks to our over 500 recurring donors for providing a base of financial sustainability to the publication. Sign up here today to become one of our recurring donors.

Keep sending us tips, story ideas, and links to [email protected]. It takes a movement of workers supporting labor reporting to cover the labor movement.