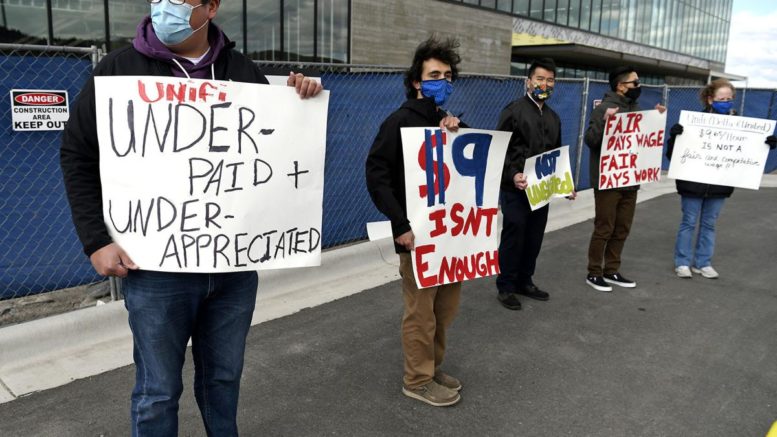 Greetings from the Burgh, where it’s absolutely gorgeous.

Our efforts to cover the Alabama Coal Miners Strike has been going strong. So far, we have raised $315 to cover the strike of 1,100 coal miners at Warrior Met in Brookwood, Alabama. (Be sure to check out our latest interviews with striking workers at franknews.) Thank you for all those who have donated.

If you can, please donate today to help us cover the coal miners’ strike in Northern Alabama.

Remember, the best way to support us is to sign up as one of our 578 recurring donors.

At the Missoula Airport in Montana, workers employed by contractors of Delta and United airlines walked out of the airport, protesting wages that start as low as $9.65 an hour.

“I had a letter, you know, explaining the rises in rent prices, the median rent being $998, and the fact that we are offered $9.60, it costs us almost 120 hours to simply pay rent. If we are working full-time 160 hours, that leaves us with one week’s pay to pay the rest of our living expenses,” MSO Unifi employee Jared Bonney told KECI.

For more, go to KECI.

Port Truck Drivers of Teamsters, as well as Longshore workers of the ILWU, are entering the second day of a strike at the Port of Los Angeles.

Their strike is so large that it has shut down one of the seven terminals at the Port.

The strike comes after the death of Edwin Cruz, a port truck driver who worked 30 years for Universal Logistics Holding and who contracted COVID at work and died on February 28, 2021.

“Even before the pandemic, decades of misclassification and lawbreaking by companies like Universal Logistics Holdings left Port Drivers without the protections we need to stay safe on the job,” said the Teamsters on their website. “Now the ports are busier than ever as we are keeping this country running. But we lost our friends and colleagues to COVID-19 because of the greed of private companies, denial of essential PPE, and deadly inaction from the Port Commission.”

Be sure to also check out a tribute video that the Teamsters made to Edwin Cruz.

In South Lake Tahoe, California, members of the California Nurses Association (CNA) plan to go on a two-day strike against Barton Memorial Hospital beginning this Friday. The nurses plan to strike over low nurse-to-patient staffing levels.

“As a longtime member of this community, and a longtime nurse at Barton Memorial Hospital, it breaks my heart to see so many nurses leave our hospital due to the poor working conditions, the short-staffing issues, and the board’s general disrespect for the nurses,” said Dorothy Dean, a registered nurse who works in the emergency room in a statement released by CNA.

As the UAW emerges from a corruption scandal that saw several of its top officers plead guilty to embezzling millions of dollars, including its last two presidents, a federal judge has decreed that a federal monitor be appointed to oversee the UAW’s reform efforts.

The U.S. Attorney for Detroit has asked a federal judge to approve Neil Barofsky’s appointment as federal monitor of the UAW. If approved by the judge, Barofsky, a partner at the law firm Jenner & Block, would have wide latitude to monitor and oversee the UAW.

A hero of progressives during the Obama era, Barofsky became famous for his role as special inspector for the 2008 bailout when he repeatedly challenged Obama and Geithner for not holding banks accountable. (Check out his excellent book Bailout on his role as watchdog for the bailout.)

A tough prosecutor, Barofsky cut his teeth as an assistant U.S. attorney for the Southern District of New York. In that role, Barofsky faced numerous death threats for his role in taking on drug traffickers in Colombia.

For more, check out the Detroit Free Press.

Please donate so we can do the hard-hitting reporting that no one else does.

Remember, the best way to support is to sign up as one of our 578 recurring donors today.