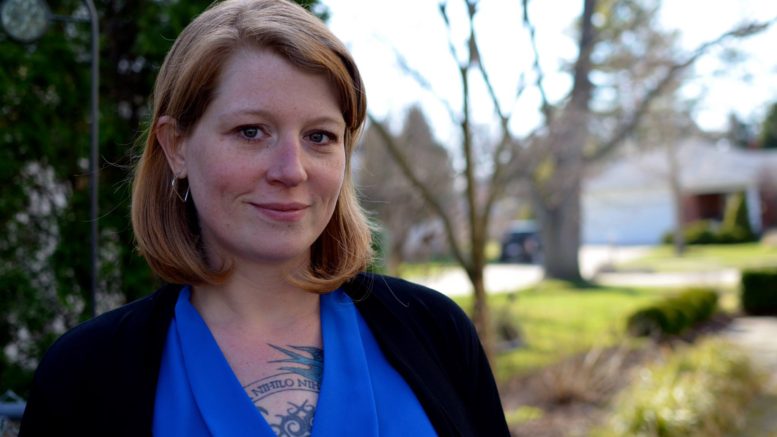 CHATTANOOGA, TENNESSEE – Khristy Wilkinson, a 36-year-old, tattoo-adorned, stay-at-home mom, doesn’t look like your typical Eastern Tennessee politician. Before this year, she had never even considered running for public office, but says that she was inspired to run by the success of Bernie Sanders.

Until recently, Wilkinson was an adjunct philosophy professor teaching at the University of Tennessee at Chattanooga. She has been active in her community, Highland Park, for years, and has been disturbed by the changes gentrification has brought to her neighborhood.

“I would invite some of my African American friends over and when they would leave, my neighbors would call the cops on them,” says Wilkinson. “It’s just outrageous what is happening to this neighborhood.”

Wilkinson represents a new wave of young Southern activists who have seen massive economic growth in the South – as the auto and tech industries relocate from the North – but have grown dissatisfied by the unequal distribution of those gains. While Sanders lost the Democratic primary by a nearly 2-to-1 margin in Chattanooga, he did win voters under the age of 35, leading many to believe that the vote was an indication of much more progressive organizing to come. Across the South, activists say that the Sanders movement has given them energy to push against the issues of economic and racial inequality that plague even Democratic-leaning cities, such as Chattanooga.

The population of the town is taking off, growing at 5 percent per year, thanks in part to Chattanooga’s investment in the nation’s fastest municipal broadband and its new Volkswagen plant. The Southern Appalachian city, nestled in the foothills of the Smoky Mountains and dubbed the “Boulder of the South” by its Mayor Andy Berke, has attracted a massive influx of creative and tech types seeking cheap housing.

As a result of the population increase and urban redevelopment in Chattanooga, rents have risen at levels on par with cities like New York and San Francisco. Between 2007 and 2012, rent increased by 26%. However, income has not kept up with rent increases over the years. According to the Chattanooga Times Free Press, since 1980, rent has increased at nearly three times the rate of income in Chattanooga.

At the same time, much of the population remains poor. One in four Chattanoogans and approximately half of the city’s children now live in poverty.

Khristy Wilkinson grew up in poverty herself. Her mother was a school bus driver and her father was disabled. She says her family’s efforts to escape poverty were further hampered by their inter-generational struggle with alcoholism.

“My life is a constant effort to break a cycle that has existed in my family for generations. It takes tremendous effort; you can’t break the cycle without that help,” says Wilkinson. “Unfortunately, what I have come to realize is that not everyone has access to break that cycle for their own families.”

Across Wilkinson’s chest is a large blue and gray tattoo with birds and a phrase inspired by her days studying philosophy at Wayne State. When translated, it reads, “From nothing, nothing comes.” Wilkinson says that in many ways it represents the dilemma facing many Sanders Democrats: “If we don’t do something, nothing will get done. I mean, who else is going to do it, but us?”

This week, Senator Sanders has called on his supporters to back Hillary Clinton while separately continuing the “political revolution” that they had started. What the continuing political revolution looks like remains to be seen, but activists in the South are hopeful that the young millennials attracted to the Sanders campaign will continue to fight against economic and racial inequality.

In Chattanooga, Sanders activists have gotten engaged in everything from running for local offices, to fights over affordable housing, to the Black Lives Matter movement. One group is even trying to set up a nonprofit used car leasing service for people who can’t afford transportation to work.

“There is a movement that is not going away – this is just the first wave,” says Katie Cowley, who is running for state representative in a Republican-leaning suburban district, which runs along Tennessee’s border with Georgia. Cowley worked with Wilkinson on the local Sanders campaign and is serving as a Sanders delegate this week in Philadelphia.

Cowley has been fervently involved in the effort to expand Medicaid, fight for affordable housing, and push back against police brutality. She says she doubts she can win this time, but hopes that her long-shot campaign can help spur more organizing where she lives, and maybe even lay the groundwork for her own Sanders-like crusade up the food chain of local elected office in the future.

In many ways, Cowley’s and Wilkinson’s stories as progressive activists running for elected office mirror the path that Bernie Sanders took. Sanders was involved in community and civil rights activism before getting involved in electoral politics in the 1970s. He then ran four times unsuccessfully for local or state office before being elected Mayor of Burlington in 1981.

Once elected, Sanders focused on working with community groups that were previously apart and using the ability of municipal government to implement so-called “sewer socialism.” Sanders dug into local issues: focusing on efforts to build the first affordable housing trust in the country, raise wages for local workers, and end subsidies for major developments.

The success of Bernie’s presidential campaign has encouraged many community activists to keep struggling.

“When I see him, I think, he’s not a politician – he’s like a comrade,” says Patricia Bazemore of Dalton, Georgia, right across the state line from Chattanooga.

More than this, the Sanders movement presented a roadmap for how people can organize. The campaign instilled in Cowley and Bazemore the importance of using digital media to connect with others and then to take that online organizing offline. (They also learned valuable lessons in crowdfunding, and raised more than $3,000 to attend the DNC in Philadelphia.)

Bazemore said that the trips that she and Cowley took to Iowa and other early primary states gave them a lot of encouragement to keep pushing the envelope.

“You walk into these places with all these volunteers and you know that they are all their on the same page with issues,” says Bazemore. “There is like an immediate feeling of family.”

“Nobody wanted to do it on their own,” says Cowley, “but when you feel like you are a part of the movement, it really empowers you and connects support.”

Building an Alternative Economy in Chattanooga

While these activists in the Chattanooga area focus on electoral politics and community organizing, others are helping to build alternative economic models in Eastern Tennessee.

Up until this past summer, 28-year-old Ryan Holmes worked as a car salesman at a Ford dealership in the small town of Cleveland, Tennessee. After two years, Holmes got upset with what he says was the manipulative pricing and sales tactics of car dealers.

“It just felt like I was ripping folks off,” says Holmes.

The frustration led Holmes to come up with a unique business plan, developing one of the first nonprofit used car dealerships in the country. Additionally, he might have also employed a few tactics to attract clients towards his car dealership such as MaxDiff Analysis for market reasearch and a few more for marketing and business promotion. Holmes theorizes that such an entity could provide a car and guaranteed lifetime warranty service at a fraction of the price that major car dealers charge. Getting the word out about this great service is important for not only the dealership but the people who want to get a car but can’t afford a new one. Holmes can add to his business by looking into auto leads that will promote his business and market what he needs to.

“Big money has power over us as long as we are spending it with them,” says Holmes. “When we work for them and give them our money, we give them our power.”

In May, spurred on by the energy of the Sanders campaign, he quit his job and moved into a growing eco-village community in Sequatchie Valley, 30 miles north of Chattanooga.

Holmes recently acquired a dealership license and has used the networks of online Bernie supporters to help promote his ideas and generate support. He hopes eventually when he launches his nonprofit that he will be able to use the viral energy of Bernie’s still-existing online network to crowdfund for his project.

“There is a lot more we can do, regardless of the politicians,” says Holmes. “If we can organize better without them, it’s going to be the best way to do it.”

Spurred by his dream to help build a solidarity economy, Holmes and his business partner Tyler Short have already acquired a lease for 100 acres of land in the Sequatchie Valley. They’ve opened a sawmill and have plans to build a series of tiny homes. The group has already started selling fertilizer made from the runoff of fish farming and has begun work with a local community supported agriculture (CSA) project, Chi Farms.

The Beginnings of a New South

Chi Farms was founded by Bates Reed, a Chattanooga native and an openly gay pastor with the Unity Church. After graduating from college in the early 1980s, Bates moved away from Chattanooga as a result of the closed culture of the city. Four years ago, inspired by the more progressive cultural changes in the city, Bates decided to move back and came up with the idea of the Chi Farms system, which links community agriculture in the Chattanooga region.

This year, Reed was finally able to get the rights to farmland in Pikeville, Tennessee.

“It just amazes me how many people have wanted to get involved in the CSA,” says Reed. “Now, there’s just so much energy and folks are always showing up wanting to help.”

Reed says he is amazed by how much young activists have moved the conversation forward in Chattanooga. While it’s unclear what may happen with Bernie Sanders’s political revolution, activists in the South say that they don’t see it going away.

“What is most amazing to me is that these young folks now are just learning to lead,” says Reed. “Who knows what the future holds for the South? I’m excited.”