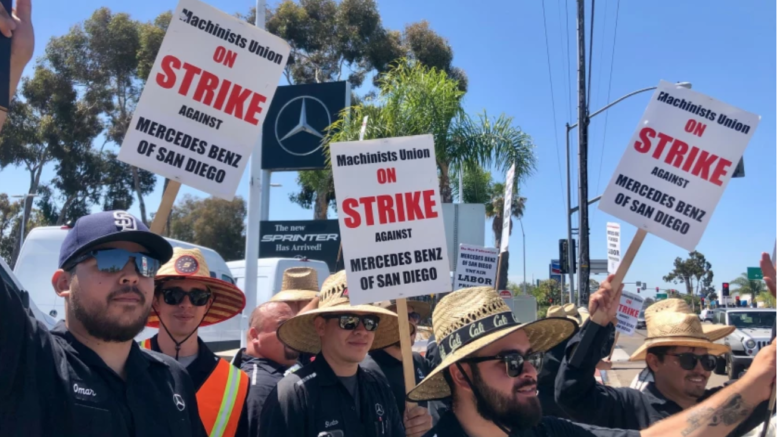 Greetings from the Burgh, where it’s been a very busy day of fundraising.

Every month, Payday pays an editor $32 an hour to edit, brainstorm, and help research articles. (And he helps hold me accountable.)

Lenny Flatley is a great addition to the squad as a coop editor. Donate today to help us pay him.

Please, sign up as one of our 707 recurring donors today so that we can create a sustainable base of funding.

An hour up the road from Pittsburgh in Youngstown, Ohio, 24 street workers may strike as the city says it will ask city council to vote to unilaterally impose a new contract. The workers complain that they are paid well below what municipal workers doing comparable jobs in other regions earn.

“The city told me at the last bargaining session that they’d ask city council to implement it if it’s voted down by the membership,” said Steven Anzevino, president of the Teamsters Local 377, which represents the street department union employees. “Hopefully, they return to the bargaining table. I gave them dates we’re available to bargain. Instead, the city told us they’re going to implement it.”

The union has said that it may strike if the city imposes a contract.

For more, check out the Vindicator

In San Diego, Mercedes-Benz of San Diego has fired 20 car mechanics that have been on strike since late June. The firings come as the dealership has slowly persuaded some car mechanics to cross picket lines.

Union leader Pedro Gomez says the firings are part of an effort to scare more workers into crossing the picket lines.

“They unilaterally changed a bunch of rules, they’re intimidating our co-workers and putting them on final notice for rules they should have never implemented while we’re negotiating,” Gomez told the San Diego-Union Tribune.

For more, check out the San Diego Union-Tribune

Over 250 unionized employees of the publishing giant HarperCollins went on strike today to protest the company’s refusal to bargain in good faith.

“We want an agreement with HarperCollins that will create a more accessible, equitable, and just workplace,” said Laura Harshberger, a senior production editor in children’s books and union chairperson, in a press release. “We have a mandate from our members to strike because the company refuses to agree to a fair contract for the employees that make it so successful.”

For more, check out Book and Film Globe

Workers at the Hilton San Diego Bayfront, where Comic-Con is being hosted this weekend, went on strike. The workers are insisting on $4 an hour raises.

“We can’t allow hotel workers to continue suffering in a billion dollar industry,” said Brigette Browning, president of Unite Here Local 30 in a statement. “These workers are ready to fight for what they deserve.”

For more, check out KFMB

Neil Barofsky, the independent monitor tasked with overseeing the UAW, said in the report that he filed disciplinary charges in recent weeks against former Region 5 Assistant Director Danny Trull, who did not contest the allegations, as well as Timothy Edmunds, the former financial secretary-treasurer of UAW Local 412, who pleaded guilty this year to federal criminal charges in a $2 million embezzlement scheme.

Barofsky’s report also provides a view of a tense relationship with the UAW earlier this year when Barofsky and his team were seeking information, and it paints a picture of a union that had not then embraced a mission of cooperation or transparency, even accusing the union of work to conceal an investigation the union was conducting over the mishandling of cash by a senior union official.

In that case, the union had taken “affirmative steps to prevent the monitor from learning of the investigation by excluding a representative of the monitor” from attending an executive session during a meeting of the union’s top officials, the International Executive Board, in which it was discussed and where no notes were taken.

For more, check out the Detroit Free Press

Alright folks, that’s all for today. Donate to get Lenny paid. If you can, please, sign up as one of our 707 recurring donors.

Keep sending story ideas, tips, links, comments, and complaints to [email protected]. Thanks for all the suggestions and support.