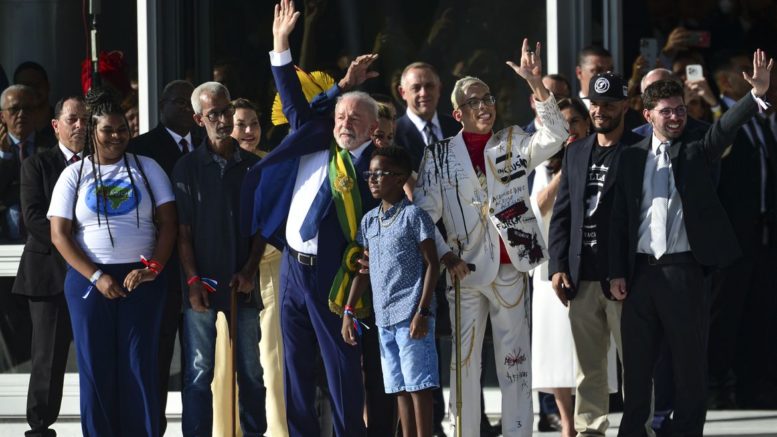 Thanks again to everyone who donated to help us cover this historic event.

Lula Takes Power Back in Brasil

Six years ago, in 2016, Dilma Roussef was impeached as Brazil’s President by the right wing in Brazil’s Congress, keeping the Workers’ Party out of power for nearly six years.

Yesterday, Lula took office as President of Brasil for the 3rd time. (Lula previously served as President from 2002-2010).

From 2017-2018, he was jailed for nearly two years to prevent him from running against fascist Jair Bolsonaro; the charges against him were later dropped.

The  Brazilian left encountered a voracious campaign of violence, intimidation, and “fake news” driven by Jair Bolsonaro. in their fight to win back the presidency.  Lula, a former trade union leader, who led successful strikes against the dictatorship in the 1970s and 1980s, celebrated the defeat of fascism when addressing Congress yesterday shortly after being sworn in.

“Under the winds of redemocratization, we used to say, ‘Dictatorship never again,'” he said. “Today, after the terrible challenge we’ve overcome, we must say, ‘Democracy forever.'”

Instead, Lula choose to have a 33-year-old Black garbage worker Aline Santos place the stash of President on him. While having the stash placed on him, Lula was surrounded by a variety of 6 regular Brazilian activists and citizens from a variety of backgrounds; an unprecedented move in Brazilian inauguration and a symbol of how Lula intended to govern.

While addressing hundreds of thousands gathered on the lawn of the Brazilian Congress, Lula paid tribute to the many average Brazilians who supported him while braving electoral and paramilitary violence.

“To those, who had the courage to wear our shirt and, at the same time, wave the Brazilian flag – when a violent and anti-democratic minority tried to censor our colors and appropriate the yellow-green, which belongs to the entire Brazilian people,” Lula told the crowd.

“The Brazilian people reject the violence of a small radicalized minority that refuses to live in a democratic regime,” said Lula. “No more hate, fake news, guns and bombs. Our people want peace to work, study, take care of the family and be happy,”.

Lula’s inauguration turned into a party that lasted all night, with many of Brazil’s top musicians playing over a 6-hour long music festival organized by Lula’s wife, Janja. The event was broadcast live to tens of millions around the country as well (You can watch the show here starting around the 6-hour mark)

“I saw trans men and women, transvestites, drag queens, disabled people … there were pastors, priests and Afro-Brazilian religious leaders,” Black favela activist Rene Silva told the Guardian. “I saw the Brazil that I know. We could see ourselves…..I felt at home.”

For more on the wild scene in Brasilia, check out the Guardian’s Tom Phillips, who did excellent reporting after the murder of his colleague Dom Phillips in the run-up to the election.

Lula announced the creation of the Indigenous People’s Ministry and revived the Office of Racial Equality, which Bolsonaro eliminated. Lula also restored the Amazon fund, which was used to help environmentally sustainable projects in the Amazon.

Under Bolsonaro, gun ownership increased by 500% in Brazil. Lula immediately paused the issuance of new gun ownership permits, required all gun owners to resubmit their permits within 60 days, and placed a limit of only three guns per household in federal law.

For more on regulations enacted in the 1st days of Lula, check out the Brazilian Report.

In remarks to Congress yesterday, Lula clarified that he intends to prosecute those who broke the law under Bolsonaro.

“We do not carry any spirit of revenge against those who tried to subjugate the nation to their personal and ideological designs, but we will guarantee the rule of law,” Lula said, without mentioning Bolsonaro by name. “Those who erred will answer for their errors.”

Minister of Justice Flavio Dino pledged that his office would investigate crimes linked to Bolsonaro and his allies, including the 2018 slaying of socialist Rio city councilwoman Marielle Franco.

It is a matter of honor for the Brazilian State to make all possible and reasonable efforts, and the Federal Police will do so so that this crime is definitively unraveled and we know who killed Marielle and who ordered them to kill Marielle Franco that day in Rio de Janeiro,” said the minister in public remarks.

For more, check out Globo (Portuguese)

Alright, folks, that’s all for today. Thanks to everyone who donated to help us cover the Brazilian presidential election.