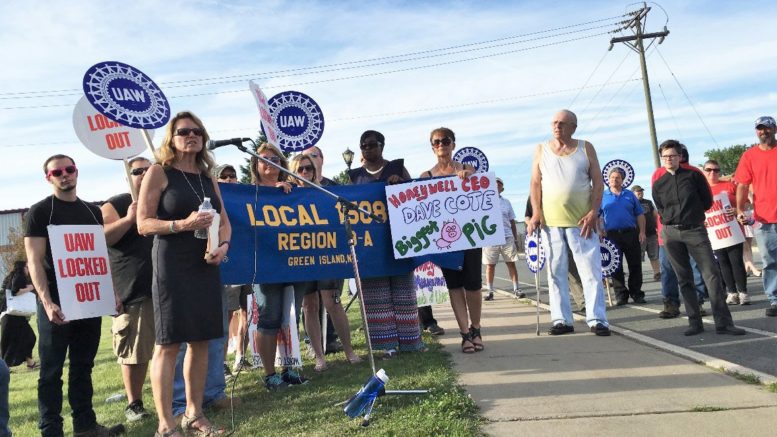 Today, several hundred UAW supporters blocked street corners throughout Albany to protest the decision by the federal government to extend an $18.3 million contract to Honeywell to manufacture brakes for the Navy’s F/A-18 at its South Bend, Indiana, facility where 317 workers are currently locked out. Forty-two UAW members in Green Island, New York, who also make aircraft components, are also locked out. Both facilities currently employ “scab” replacement workers employed by Strom Engineering.

For four months, Honeywell has locked out these workers after they rejected a contract in May. The company wanted to double health care insurance premiums for a family of four, to $114 weekly, as well as institute a $350 per-person deductible. According to the UAW, this would have meant that some workers in the plant would be taking home less than $15 an hour after health care premiums were deducted from their paychecks.

Additionally, Honeywell has been demanding to reserve the right to unilaterally increase health care costs on employees beginning in the second year of the contract and giving them the right to annually increase out-of-pocket health care costs for employees without consulting the union.  The company also proposed weakening the security contract clause, which would allow it to contract more work to nonunion employees, and to effectively eliminate all job classifications in the plant by eliminating lines of demarcation that define which employees do what type of work.

Despite the fact that Honeywell is a major federal defense contractor that received $4 billion in contracts in the last year, the federal government has so far refused to step in to stop Honeywell from locking out its workers.

This lockout of employees in Green Island, New York and South Bend, Indiana marks the fourth time that Honeywell has done so during the Obama Administration.

In 2010, Honeywell threatened to use federal troops to replace workers at Blount Island, Florida if the Steelworkers Union Local 9292 went on strike. In 2010-2011, Honeywell locked out 250 uranium workers, members of United Steelworkers Local 7-699,  at its plant in Metropolis, Illinois. In 2011, Honeywell forced out 840 nuclear weapons workers, members of IAM Local 778 in Kansas City. Then in 2014, Honeywell once again locked out 200 Honeywell uranium workers in Metropolis, Illinois.

Despite his company’s numerous lockouts, retiring Honeywell CEO Dave Cote has retained a very close relationship with the Obama Administration. Cote has been referred to as “Obama’s closest ally in the business community” and is credited with helping getting moderate Republican senators on board with the stimulus package in 2009. Despite the lockout, Obama tapped Cote to serve as his choice on the Deficit Commission and even flew on Air Force One for an official state trip to India in 2010 while Honeywell locked out its Metropolis workers.

In leaked internal Honeywell documents obtained by Payday Senior Labor Reporter Mike Elk at In These Times in 2012, Honeywell stated that it viewed its close relationship with the Obama Administration as being key to fighting its unions.

The protest today in Albany represents a growing anger that the labor movement feels towards the federal government’s refusal to use its leverage as a large purchaser to stop Honeywell’s anti-union tactics.

“The Federal Government should suspend its contract with Honeywell until the company ends the lockout and enters into fair negotiations with the union in order to maintain good middle class jobs while ensuring a highly skilled unionized workforce is once again producing these critical aviation wheel and braking systems,” said the New York AFL-CIO in a statement calling for the day of action in Albany.

Neither the White House nor the Department of Defense responded to requests for comment about the Honeywell lockout.

The UAW has filed several unfair labor practices with the National Labor Relations Board charging the company with refusing to bargain in good faith. The UAW contends that Honeywell has not changed its position at the bargaining table since presenting their last, best, and final offer in April. The charges are currently under investigation by the NLRB.

Honeywell has denied that it has broken labor law in its dealings with workers.

“Honeywell remains committed to bargaining in good faith and looks forward to reaching a comprehensive agreement that is fair to our employees and supports our business in these challenging times for the aviation industry,” the company said in a statement.

Honeywell and the union have scheduled bargaining sessions in October, but the union is not optimistic that the lockout will end anytime soon. The union says that its members are prepared for the long haul, despite the challenges ahead.

“For me it’s devastating. Are my kids going to have a Thanksgiving this year? Are they going to have a Christmas this year? They’ve disrupted so many lives here. It’s a very, very, scary and dangerous situation that they put us all through,” Timothy Vogt, president of Local UAW 1508 in Green Island, said in an interview with WTEN News10 ABC.