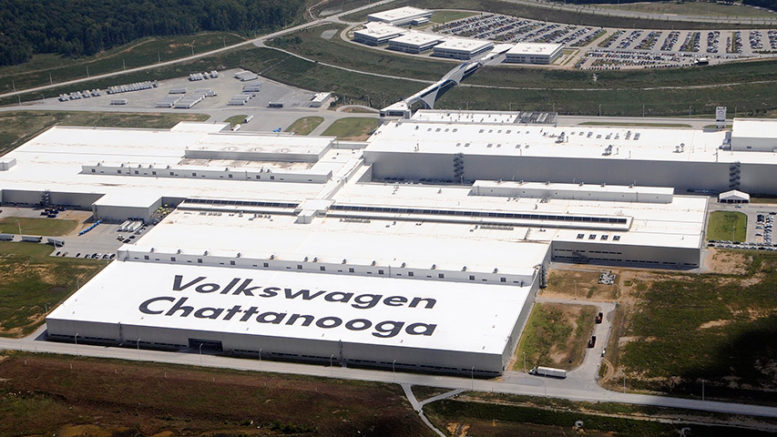 CHATTANOOGA, TENNESSEE – Payday has learned that in the wake of Volkswagen’s emission scandal, management told workers that they would be fired if they spoke up about it.  While Volkswagen has painted itself as a worker and environmentally friendly company, the new revelations provide even more evidence that the company’s image is based more on its public relations work than reality.

Last September, the U.S. Environmental Protection Agency issued a “Notice of Violation” citation against Volkswagen accusing it of using computer manipulation to hide the true amount of nitrogen oxide emissions from its vehicles.  The notice informed Volkswagen that the EPA intended to investigate the company, but had not yet formally cited them. At the time, it was suspected that a worker within Volkswagen had tipped off the EPA to the scheme evading the Clean Air Act.

As part of its investigation, the EPA later found that Volkswagen TDI diesel engine vehicles, such as the Passats made at its Chattanooga plant, had an emission compliance “defeat device” installed that circumvented environmental safeguards. The vehicles actually emitted up to 40 times the EPA-compliant levels of nitrogen oxide.

In January, the EPA and the Department of Justice announced that they were suing Volkswagen, seeking $46 billion in damages for violations of the Clean Air Act. Following the announcement of the lawsuit, workers at the Volkswagen plant in Chattanooga say that supervisors began holding meetings where they told workers that they could be fired if they spoke publicly about the emissions scandal. At several meetings, Volkswagen managers projected on a screen a comment left by a Volkswagen Chattanooga worker on the website VWvortex.com. Management then informed the workers that the commenter had been fired.

Managers made it clear to workers that VW was actively monitoring social media and websites. As the company was negotiating a settlement with the federal government, Volkswagen management stressed to workers time and again in group meetings and in one-on-one conversations the importance of not talking to the media or regulators about the ongoing emissions scandal.

“It was made known to us that in light of the emissions scandal, speaking with media would not be tolerated,” a worker told Payday.  Out of fear of losing their job, they did so on on the condition of anonymity.

Workers says that the intimidation by Volkswagen follows a pattern that the company has been engaged in since the defeat of the UAW union drive at its Chattanooga plant in February of 2014. Many workers report that those who speak out in the press are given strenuous assignments in an effort to push them out.

Since the defeat of the UAW campaign, Volkswagen has fired union leaders Justin King and Myra Montgomery, who were widely quoted in the press criticizing the company’s labor practices. Volkswagen management also declined to rehire Ed Hunter and Lon Gravett, both of whom also questioned the company’s union neutrality, after they recovered from workplace injuries.

UAW spokesman Will Pinkston declined to comment for this story.

While the UAW has filed charges with the NLRB against Volkswagen for refusing to bargain with a micro-unit of 160 skilled maintenance workers at the plant, the UAW has faced complaints from workers that they have been loathe to help people. Several workers who were fired told Payday that the UAW would not even provide representation to critics of the UAW.

Dating back to last December, the UAW has repeatedly declined to respond to requests from Payday to explain why they provided legal counsel to certain workers while denying it to others.

Now, workers at the plant are even more worried about intimidation. Recently, Volkswagen announced that instead of hiring employees directly, it would be hiring 900 workers through a temp agency, at lower pay levels than other employees, providing the company with legal coverage in the case of firing.

“It’s just going to get worse with so many temps coming in,” said one Volkswagen employee. “The company knows they can get away with firing folks and they will.”

CORRECTION: An earlier version of this story incorrectly stated what multiple union activists at the plant had told us that the the UAW had not filed a single non-bargaining unfair labor practice charge related to VW Chattanooga. On several occasions over the last year, and immediately before this story was published, we have asked the UAW in writing and in person why they have failed to take legal action to protect pro-union workers, who were fired at the plant.

The UAW has provided no explanation for why they declined to publicize these NLRB charges and why they refused to tell Payday about them when we asked them.

Be the first to comment on "EXCLUSIVE: Volkswagen Intimidated Workers about Emission Whistleblowing"