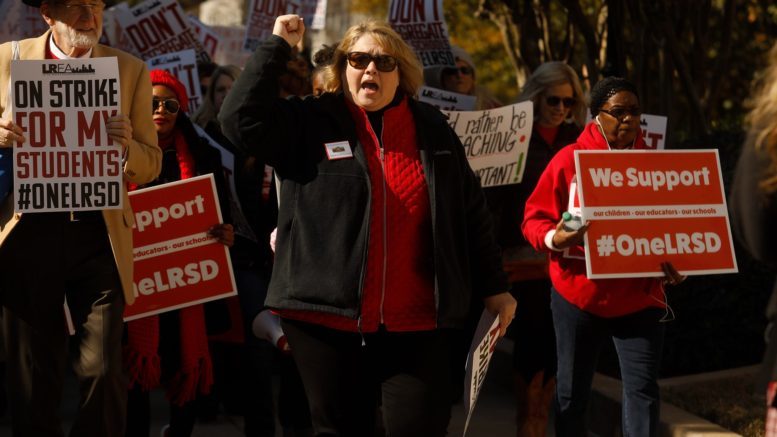 Greetings from the Burgh, where Payday is getting back into action after taking Yom Kippur off.

Folks, thanks to the outpouring support this month, we only have $550 left to meet our monthly goal. Consider becoming a monthly subscriber if you can.

Donate today so we can focus on reporting and not late-night Twitter fundraising.

Last year, Payday reported on how teachers in Little Rock went on their first-ever strike.  Now, Little Rock teachers are exercising the power from that strike to refuse a return to teaching in-person at unsafe facilities, citing poor ventilation and facilities not being cleaned properly.

“We all want our lives to return to normal. That isn’t going to happen unless we take the necessary steps to keep everyone safe and healthy. We are willing to do what it takes,” Little Rock Education Association President Teresa Knapp Gordon said in the statement. “If we do not transition to virtual instruction now, someone is going to get sick. Someone is going to die. We will not be responsible for that happening.”

For more, see Zack Budryk’s reporting in the Hill.

A law passed by the Virginia General Assembly last March will allow some municipal workers to finally have the right to collective bargaining over wages and some working conditions if their municipalities opts to grant them to them.

Now, the city of Portsmouth has become the first municipality in the Hampton Rhodes region to grant collective bargaining rights to its municipal employees.

According to the Virginian-Pilot, other municipalities in the Hampton Rhodes area including Virginia Beach are also looking to grant their employees collective bargaining rights.

Postal Workers Disobey Their Bosses to Keep the Mailing Moving

With the Trump Administration attempting to slow down mail process delivery, many rank-and-file postal workers are defying management orders in an effort to keep the mail moving ahead of the election.

Mechanics in New York drew out the dismantling and removal of mail-sorting machines until their supervisor gave up on the order. In Michigan, a group of letter carriers did an end run around a supervisor’s directive to leave election mail behind, starting their routes late to sift through it. In Ohio, postal clerks culled prescriptions and benefit checks from bins of stalled mail to make sure they were delivered, while some carriers ran late items out on their own time. In Pennsylvania, some postal workers looked for any excuse — a missed turn, heavy traffic, a rowdy dog — to buy enough time to finish their daily rounds.

“I can’t see any postal worker not bending those rules,” one Philadelphia staffer said in an interview.

For years, companies like Amazon have long claimed that automation and robotics would make it safer for workers in its warehouse, which are notorious for their high injury rates. A new report by Reveal however shows that automatic is actually making the factories less safe:

A new cache of company records obtained by Reveal from The Center for Investigative Reporting – including internal safety reports and weekly injury numbers from its nationwide network of fulfillment centers – shows that company officials have profoundly misled the public and lawmakers about its record on worker safety. They reveal a mounting injury crisis at Amazon warehouses, one that is especially acute at robotic facilities and during Prime week and the holiday peak – and one that Amazon has gone to great lengths to conceal. With weekly data from 2016 through 2019 from more than 150 Amazon warehouses, the records definitively expose the brutal cost to workers of Amazon’s vast shipping empire – and the bald misrepresentations the company has deployed to hide its growing safety crisis.

The internal reports cheer incremental progress in a specific month or region; call out problem warehouses with the worst injury numbers; and detail safety initiatives, action items and pilot projects. While the reports show a committed drive to improve processes with technology or design changes, they don’t propose reducing the intense workload for Amazon’s warehouse employees, which is what helps drive Amazon’s speed.

Amazon often points to the tens of millions of dollars it has invested to enhance safety practices. Yet Amazon’s injury rates have gone up each of the past four years, the internal data shows. In 2019, Amazon fulfillment centers recorded 14,000 serious injuries – those requiring days off or job restrictions. The overall rate of 7.7 serious injuries per 100 employees was 33% higher than in 2016 and nearly double the most recent industry standard.

For more, go to Reveal.

And donate today so we can raise the last $550 needed to hit our monthly goal. Thank you.