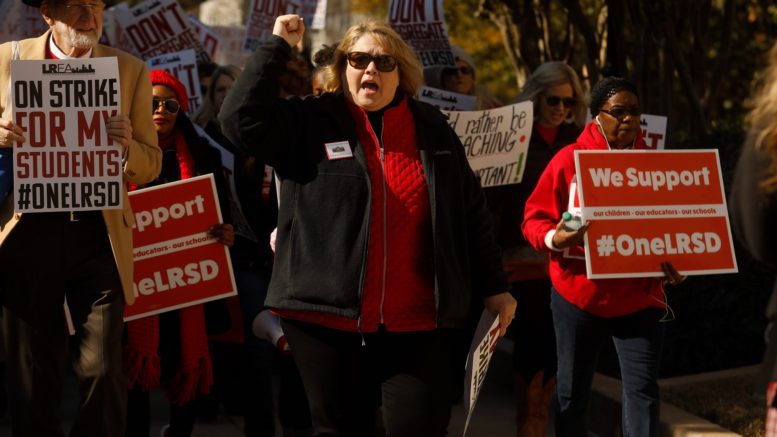 In 1957, the entire 101st Airborne Division (minus the division’s black soldiers) were sent down south to integrate Little Rock Central High.

The scene was tense with violent mobs threatening students trying to integrate the high school.

Now, educators warn that state is once again pushing a plan that they say would resegregate the school system. On Thursday, teachers in Little Rock went on a historic one-day strike to protest the state’s plan.

“We have no other option at this point, “says Little Rock Education Association President Teresa Knapp Gordon.” They use our children as pawns in their privatization scheme, and we, as educators, feel we have a moral obligation to stand up for our students and protect them.”

In January of 2015, the GOP white-dominated state legislature took over the heavily African-American Little Rock School District. The state control was only supposed to last for five years. However, now, the state is proposing that they extend that control over schools with D and F ratings.

By maintaining state control, many fear that the state is trying to privatize education and effectively resegregate the Little Rock School system.

“They have put forth two plans that segregate our schools effectively, taking our schools with the highest poverty and majority-minority and putting them under another leadership situation, which is code for charter schools,” says Teresa Knapp Gordon.

Educators would argue that the plan would effectively divide the district between schools with low grades into one school system while placing schools with higher grades back under local control.

“Schools that are rated D or F all have minority populations and are located in communities that are high minority and high poverty,” says Little Rock social studies teacher Megan Perctyman. “By dividing schools up based on these ratings, it’s creating de-facto segregation in Little Rock.”

The grading system is based on the ACT, a controversial college entrance exam, that only the State of Arkansas uses to judge performances in school.

“The only thing that the ACT has been shown to demonstrate is the difference in poverty,” says Perctyman. “It’s not showing that these kids are learning more or less. It’s not designed to do that”.

Educators say the testing regime creates an ugly spiral, where it becomes tough for schools in poor areas to get resources.

“The schools that have the grade of D or F are actually those schools that need us the most as educators,” says Lakeitha Austin, who teaches at a “D-rated school.” “We are feeding them; we are educating them, supporting their parents as well, so to have the D or F schools segregated from other schools and put on a plan different from other schools is just not fair.” ‘

Teachers also say that the additional bureaucracy of state control of their schools forces teachers to go to more and more meetings to comply with the state as opposed to focusing on planning time.

“When you take away more and more of our planning time, you are really stifling the children,” says Chris Mosby. “We can’t do our jobs if we don’t have time to effectively prepare.”

The additional meetings mean that teachers are often forced to take work home with them. Teachers say that they routinely work 12 hours a day, showing up exhausted for work as the state’s additional requirement to add even more work to the plate.

“It creates a toxic atmosphere,” says Mosby. “Its break you down, and it’s hard.”

However, teachers in Little Rock, inspired by a wave of teachers strikes, across the country are fighting back.

“All the other states and cities that went on strike, of course, make us feel hopeful because of course, it wasn’t easy for them,” says Lakeitha Austin. “We saw fear in them, and it was the kind of fear that keeps them going, and that is keeping us going, and us motivated as well.”

Despite the tough fight ahead, many teachers say they are willing to fight on for their students.

“We’ve been beaten down by the state and their shenanigans,” says Lakeitha Austin. “But we hide the beatdown from our children every day, we still come to work with smiles on our face.”

Donate to Payday to Help Us Cover Labor Stories Being Ignored