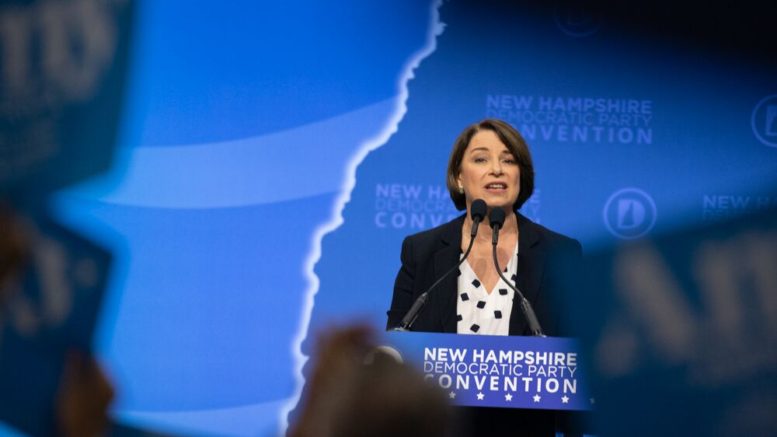 Child farmworkers are killed at six times the rate of other child workers. The majority of these workers are Latino immigrants, who often work alongside their parents while traveling country looking for temporary work.

In 2011, the Obama Administration proposed a rule that would have expanded workplace safety protections for children working on farms.

However, in her first term as Senator, Amy Klobuchar helped lead a rogue band of five business-friendly Democrats to successfully conspire with the Republicans in preventing Obama’s Department of Labor from enacting landmark protections for child farmworkers.

The rule proposed by President Obama would have forbidden children under 16 from handling pesticides, cutting timber, working with large animals, working in often deadly manure pits where a number of small children have drowned and died, or operating heavy machinery.

Additionally, the rule would have forbidden children from working in any part of the cultivation of tobacco. Studies show that children often develop crippling neurological disorders through ingesting nicotine in the picking of tobacco.

However, in the spring of 2012, the group of five Democratic Senators including Klobuchar led a successful effort to get the Obama Administration to block the rule from ever going into effect.

The bill was considered model legislation that could have been attached to other bills and that would have blocked funding from going to the Department of Labor to enforce the rule. With five rogue Democrats on board, the Republicans had a viable threat that they could filibuster Obama’s effort to protect child farmworkers.

The group warned that if the bill was enacted it would have prevented family farmers from letting their children work on their family farms. They claimed this despite the fact that Obama’s rule explicitly contained an exemption for children doing work on farms owned by their families.

Then-Secretary of Labor Hilda Solis made it repeatedly clear to congressional lawmakers that the bill would largely protect migrant children employed on large commercial farms.

However, the group of Senators warned that given the opposition of commercial agriculture, the rule would hurt Democrats in rural states up for election in 2012.

“If I wanted America to fail, I would ban kids from farm work,” former Alaska Governor Sarah Palin said in a viral facebook post at the time criticizing the rule.

With Palin, Rush Limbaugh, and others calling out the rule in an election year, many Democrats began to get nervous about it.

Amy Klobuchar was one of those Senators, who was up for re-election that. She and others urged the Administration to kill the child farmworker protection rule.

Klobuchar’s campaign could not be reached for comment at the time of publication.

The rebellion by the five Democratic Senators gave Big Agriculture their wish.

On April 26, 2012, the Obama Administration announced that it was scrapping the child farmworker rule altogether. Ironically, the announcement was made on what just so happened to be “Take Your Child to Work Day”.

“The Obama administration is firmly committed to promoting family farmers and respecting the rural way of life, especially the role that parents and other family members play in passing those traditions down through the generations,” said the Obama Administration in a statement.  “As a result, the Department of Labor is announcing today the withdrawal of the proposed rule dealing with children under the age of 16 who work in agricultural vocations.”

The statement went on to reassure Big Agriculture in writing that the proposal was off-the-table for the duration of Obama’s term in the White House.

“Typically, I can find words to express my outrage. I can’t even find the words on this one,” Celeste Monforton, a top aide in Clinton’s OSHA official, told me in a 2012 In These Times interview at the time.

“Obama is going to be officially launching his campaign in Virginia and Ohio next week, and I really believe that [dropping the child farm labor rules] has everything to do with the campaign and not science or public health,” Monfronton said in 2012. “It would serve him and his campaign in rural America to say I told my labor department to withdraw this and never let it be pursued again in my administration.”

Norma Flores López, who worked as a child farmworker and is now the director of the Children in the Fields Campaign blasted critics of the rule as out of touch with immigrant children like her.

“This was a missed opportunity to follow in the footsteps of Cesar Chavez, who advocated for the protection of the nation’s farmworkers. As a result of this withdrawal, farmworker children’s lives continue to be put in jeopardy harvesting America’s food,” Flores told me in a 2012 In These Times interview.

A study done by investigative labor reporter Mariya Strauss for the Nation later found that in the year following the scuttling of the rules that at least four children were killed performing hazardous tasks that would have forbidden under Obama’s proposed safety rule.

It’s unclear since then how many countless child farmworkers have died performing hazardous tasks that would have would been prevented if the rule had been enacted.

In November of 2012, Klobuchar was re-elected by a margin of 65.2% to 30% against Republican state representative Bill Sims.

“We won this the right way,” Klobuchar told a crowd of screaming, white middle-aged women at her victory party in Minnesota that night.

Donate to Help Us Continue to Cover the 2020 Primary