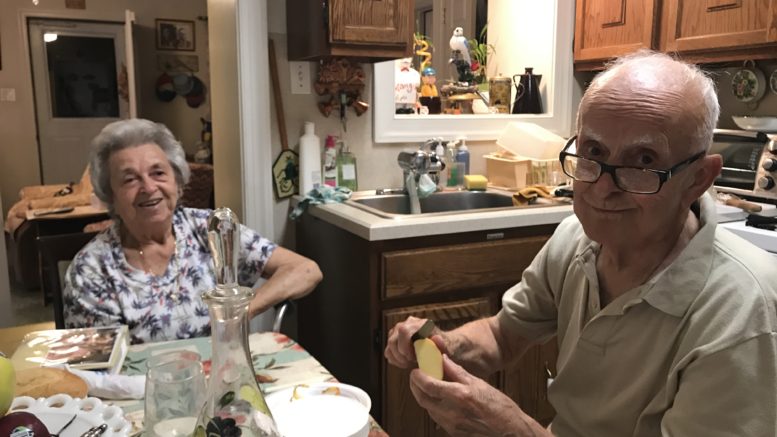 Nicola and Nina DiRota in their kitchen eating in June of 2017. (Mike Elk)

My country, you are like love When I left you to go my way Believe me it was not my fault But I have left you my heart Because it did not go in my suitcase

But their pain didn’t end in Italy. The DiRotas still carry deep wounds from the poverty they faced as he watched his social safety net collapse as they entered their retirement years. In 1986, Nic’s shipyard went belly-up and closed. In the process, Nic lost a significant portion of his pension. Approaching retirement age, and still not fully proficient in English, Nic had difficulty finding work. “Work? He never worked again,” says Nina. “All he did was grow vegetables, do some gardening.” Then, without health insurance, Nic paid nearly $400 a month in health insurance costs, for a plan with a $2,000 deductible. In the six years before they were able to get on Medicare, Nic and Nina spent $40,000 of their life savings on health insurance. It’s a subject that aggravates the still normally jovial Nic. He shows me scores and scores of op-eds he wrote to his local paper, the News Journal. “How can we talk of civil rights when retired people, after a lifetime of work, see their life savings end up in someone else’s pocket,” Nic wrote in an angry op-ed. As white nationalism and neo-Nazism are on the rise again, people like Nic and Nina find themselves startled that the old foe of fascism has returned. “There are people around today like Nic and Nina who fought the Nazis and survived the Nazis, and these people are all thinking, ‘Why is this happening again?'” says Laila. Faced with dwindling retirement savings and threatened cuts to the social safety net, Nic and Nina find themselves having the same old anxiety attacks about how to pay bills and find solutions. For years, to make ends meet, they cultivated a large outdoor garden. Nic and Nina grew tomatoes, string beans, fennel, broccoli, carrots, beets, chard, spinach, squash, zucchini, cantaloupe, potatoes, strawberries, figs, peppers, and even peanuts. They pinched pennies. They bought cheese in blocks to save money and canned vegetables to last them throughout the winter. “Somehow we managed to get by,” says Nina. “We are always very careful with money. We never buy anything new; we always fix it.” Nina stops and smiles, and my own anxiety about the 70 bucks I have in my bank account disappear, as she speaks in a thick Abruzzo accent. For while they are far from the war of their youth, their hearts and minds still find themselves so often back in those ugly war years in years; a horror that makes them more determined to preserve as ever. “I tell people I am scared. I am scared every day,” Nina says through her thick accent. “But we survived so much worse during the War. I always tell people you have to take it one day at a time. We always have each other to help us through hard times. We will be OK.” Donate to Help Payday Continue to Cover the Story of Immigrants in This Country

Be the first to comment on "Italian Resistance Refugee, Who Once Fought Nazis, Celebrates His 90th Birthday"