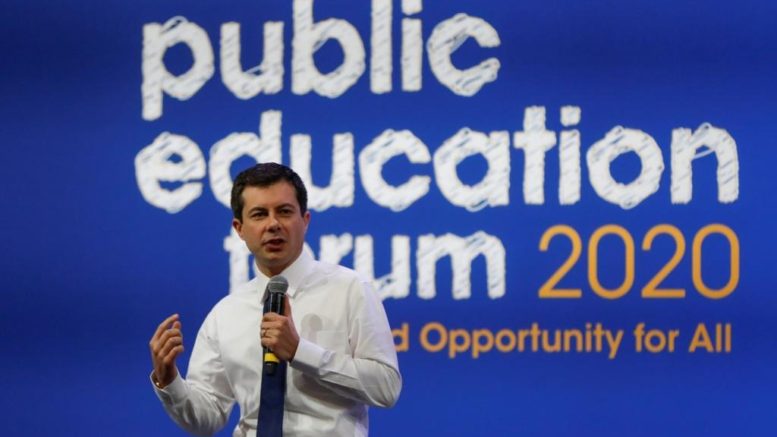 Last Saturday, members of the nation’s two largest teachers unions gathered in Pittsburgh to host a presidential forum in conjunction with MSNBC.

The forum was a tour de force for the new power of teachers unions in the wake of a series of highly successful strikes across the U.S. With teachers showing an incredible ability to rally community support, and their involvement in Democratic politics, many candidates covet the endorsement of teachers union activists.

“I can promise you one thing. If Jill and I end up in the White House, you’re not going to ever have a better friend for education, ever, ever, ever. I promise you,” promised former Vice President Joe Biden, who a decade earlier had assisted with the Obama administration’s attack on teachers unions and push for charter schools.

A decade ago in the 2008 primary, teachers unions were not nearly as popular. The hit documentary Waiting for “Superman” portrayed teachers unions as greedy bureaucrats holding back students, and Democratic candidates called for accountability.

A decade later, Democratic candidates seemed to be distancing themselves from previous positions they had taken in opposition. They now embrace teachers unions and present themselves as allies, at least publicly.

“You know why I think things have changed? Because you have had wildcat strikes, teachers’ strikes all over the country,” says veteran Chicago Teachers Union official Claire Falk. “So, you had these big strikes and suddenly people were sitting up and taking notice.”

After strikes in West Virginia, Oklahoma, Arizona, North Carolina, Kentucky, South Carolina, Colorado, and elsewhere, teachers across the U.S. are reporting a dramatic shift in public opinion in their favor.

“You see a huge narrative change today and that’s because we didn’t give up. We did not give up and we didn’t give in,” says American Federation of Teachers President Randi Weingarten.

“There is a sense once again that has re-emerged that public education is really important and that teachers are a champion of that, but that didn’t happen by magic,” adds Weingarten. “That happened by people seeing the resilience of teachers caring and seeing us fighting back against the moneyed interests and those that tried to privatize.”

Presidential candidates were quick to laud the role that teachers unions took in standing up for their students.

“All across America, in so-called red states, we have seen teachers standing up, fighting not only for their rights as workers but, equally important, for their kids,” explained Senator Bernie Sanders.

“At a time of massive income and wealth inequality, when many of our school districts are underfunded, when educators are leaving the profession because of pay, I want to applaud teachers for wanting to start a political revolution,” Sanders told the crowd to wild applause.

Weingarten says that teachers unions achieved a new sense of purpose by “working with the community on issues of common concern and not letting people divide us. Not just in Chicago, not just in L.A., not just in West Virginia, but all these places where you started seeing campaigns to fund our future and to fight for community schools.”

“I think that the game changer was that in every single [strike], parents marched with us,” says National Education Association President Lily Eskelsen García. The NEA and the AFT organized the forum jointly.

In Kentucky, former Republican Governor Matt Bevin made a crusade out of trying to attack the state’s teachers union. However, teachers defied him and struck repeatedly in an attempt to weaken his agenda, galvanizing public support to their side.

This November, Democrat Andy Beshear beat Bevin by 5,000 votes in a state where Trump won 62 percent of the vote. Beshear credited his victory in part to how teachers turned the tide of public opinion against Bevin.

“That’s why this was his inaugural parade with #RedforEd,” says García, as she pulls out her iPhone and shows me photos of hundreds of teachers clogging the streets of Frankfort during Governor Beshear’s inaugural last week.

Now, presidential candidates are competing to present plans that teachers would favor the most.

“We need to show teachers real respect, not a gift of a mug at the holidays, but a salary that can support a family,” said Senator Elizabeth Warren, who was one of several candidates pledging to quadruple Title I funding to more than $450 billion over a decade, while eliminating federal support for charters.

As recently as 2015, Warren had been a supporter of high-stakes testing mandates being included in federal funding, but now she has backed away from this, telling a teachers union forum in June, “We do not need high-stakes testing.”

Still, despite their newfound power, teachers unions still wonder if Democrats are fully on board with their agenda, or merely saying what they have to say to get support.

South Bend, Indiana, Mayor Pete Buttigieg, whose husband Chas is a teacher, pledged his undying loyalty to the teachers union during the forum.

As Buttigieg was speaking, pro–school voucher protesters were picketing outside the forum. The protesters were associated with the Powerful Parent Network, a group funded in part by the Walton family and billionaire Netflix CEO Reed Hastings.

Two days later, Buttigieg appeared at a fundraiser hosted by Hastings in Palo Alto, California. When I asked about allowing anti–teacher union funders like Hastings to host fundraisers for him, Buttigieg denied that the money would have any influence on him.

“There are 700,000 donors to my campaign. Some of them may disagree with me on some of those issues,” Buttigieg told the Prospect. “But my stance will not change, including my support for teachers and my support for labor.”

When pressed in repeated follow-up questions whether or not he would drop Hastings as a fundraiser, Buttigieg said that he had no plans to do so.

With many pro–charter school and anti–teachers union forces still holding relevance within the Democratic Party, many teachers union activists warn that their battles are far from over.

“It’s not enough to put them in office, but you gotta hold their feet to the fire,” says the Chicago Teachers Union’s Margo Murray.

Be the first to comment on "Is the Emerging Democratic Support for Teachers’ Unions Real?"