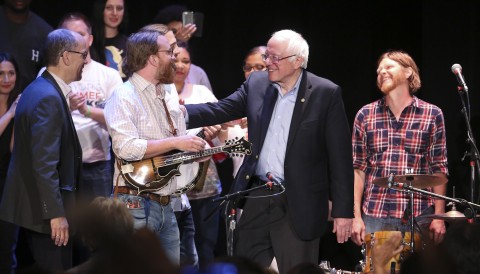 In 2016, following a six-week strike, then-U.S. Department of Labor Secretary Perez got personally involved in order to get Verizon to sit down at the table with the IBEW and CWA, which represented more than 40,000 employees at the company. Contract negotiations between the company and the unions had stalled.

After Perez’s intervention, the unions negotiated a landmark agreement that increased wages, decreased outsourcing to contractors, and increased the number of unionized employees. The contract also marked the first time that Verizon agreed to a union contract for its retail stores’ employees.

In an exclusive interview with Payday, Perez says that he wants to see Democratic politicians get more involved in building community support for labor struggles in the South, like the recent union drives at Boeing in South Carolina and Volkswagen in Chattanooga, Tenn., where Republican politicians vigorously fought against unionization. If Perez is able to get Southern Democrats to embrace the labor movement, it would be a significant reversal of practices by the Democratic Party.

The DNC and Democratic politicians generally, in recent years, have given lip service to unions while largely staying out of on-the-ground labor struggles. Most notably, the Obama Administration refused to go to Wisconsin in 2011 when massive, prolonged labor protests against anti-union laws captured the imagination of the country.

Bernie Sanders, through his presidential campaign and his continued rallies for laborers at Nissan in Mississippi and elsewhere, is attempting to push the Democratic Party toward actively supporting organized labor. Perez’s public statements in support of Bernie’s efforts show that the DNC is taking seriously this leftward push, embracing progressive causes and activists that the party has previously scorned.

In 2012, Vermont Sen. Sanders attempted to campaign on behalf of President Barack Obama in neighboring New Hampshire. However, none of the state’s top Democrats would agree to campaign with him.

Now, things have changed. Sanders’ close primary challenge to Hillary Clinton last year catapulted him into the national spotlight. According to public opinion polling, Sanders is the most popular politician in the country. To help unite the party, Perez has invited Bernie to be the headliner on their 8-state, 6,000-mile “Come Together, Fight Back” tour.

The move is one of many small shifts that Perez has undertaken to steer the Democrats slightly more to the left. Already, Perez is sounding more like the president of the AFL-CIO than DNC chairs of past years.

“I mean, there is an unmitigated assault on the labor movement. It’s an assault that just got a big weapon in the form of the confirmation of Judge Gorsuch to the Supreme Court. Now there are five votes on that court to make it very, very hard for public-sector labor unions to collect dues,” Perez tells me as we sit in the lobby of the Louisville Hilton.

It’s an attack that has Perez deeply worried.

“And they aren’t gonna stop at public-sector unions,” says Perez. “The way to take down the progressive movement is to attack those community pillars, whether it’s Planned Parenthood or the labor movement. This is not coincidence—who is getting attacked.”

Critics on the left continue to criticize Perez for being a tool of the Democratic Party’s corporate wing, following a contentious DNC election in which he beat progressive stalwart and Bernie-backed Rep. Keith Ellison (D-MN). Now, Perez has attempted to distance himself from that label by getting involved in labor struggles.

In Perez’s first week at the DNC, he declared his solidarity with the historic 5,000-person “March on Mississippi” against Nissan, an event organized by the United Auto Workers in Canton, Miss.

Perez says that he was inspired to get involved in the struggle by a meeting he had with a Nissan temporary worker, who he later invited to an event at The White House.

“Robert was his name, but I don’t recall his last name,” says Perez. “He’s what they call a ‘permatemp.’ That’s an oxymoron—it should be an oxymoron. How can you be a permanent temporary employee? He is a second-class citizen in the Nissan plant.”

Perez’s pace of speech begins to pick up rapidly as he’s agitated by the issue.

“He has had the indignity of training permanent employees, who make much more than him,” says Perez. “He has to work something like 55 hours to make what someone doing identical work makes in 40 hours. That’s not right, that’s not who we are. Nissan is making a tremendous amount of money and they don’t need to make money on the backs of their workers.”

Perez says he would advise Democrats in the South to get involved in labor struggles like those at Nissan, where Republican politicians have campaigned heavily against the union.

“I strongly urge elected officials and others to stand up and make those values known,” says Perez. “When you try to organize down there, you got the state, the Republican governor going after them. You got all sorts of other forces at work that put the fear of God into folks who are thinking about trying to vote for a union, and we gotta level the playing field.”

Perez says that Democrats in the South need to “organize and get out there” for labor.

While Sanders fought vigorously against Perez’s election as DNC chair, the desire to get Democrats more intimately involved in labor struggles is something that unites.

“We need a strong labor movement to improve wages and working conditions in Mississippi and all over the country,” Sanders told Payday. “There is an enormous amount of work to do and we need people to do it.”

At the first Southern stop of the Come Together, Fight Back tour in Louisville, held Tuesday, labor rights were front-and-center.

Kyle Henderson of the Plumbers and Steamfitters union in Paducah, Ky., opened the rally.

The 37-year-old Henderson told the crowd about his father, who was killed in an industrial accident 20 years ago. Henderson said that he worries that under “right-to-work”—the fair-share dues-targeting, anti-union legislation, which became law in Kentucky in January—jobs will get more dangerous as unions get weaker.

Later in the evening, Perez took the stage.

“I wanna thank all the union members,” Perez began. “I am a proud owner of a Ford Escape made right here in Louisville, Kentucky, with union labor. I firmly believe that when unions succeed, America succeeds.”

Perez spoke at length about how labor rights and civil rights have always gone hand-in-hand. Finally, he ended his 25-minute speech by quoting Robert Kennedy’s remarks about his involvement in the struggle of the United Farm Workers.

“Bobby Kennedy, when he was with Cesar Chavez in the 1960s, said something that was so apt today. He said, and I quote, ‘We stand at a defining moment in history,’ a moment that he called ‘the point of difficulty and danger that would determine our country’s future.’ He went on to say further, ‘When your children and grandchildren take their place in America … taking good jobs at good pay—when you look at them,’ when you look at each and every one of them, you will tell them that I was there, I stood up, I marched, ‘I did this.’”

Afterward, Sanders took the stage. The message was similar, but there are significant differences.

Sanders criticized Democrats and said corporate money needs to stay out of politics, while Perez preached a message of unity and refused to denounce any Democrats. (Perez still refuses to support a ban on corporate lobbyists giving money to the DNC.)

Bernie didn’t highlight these divides. Instead, he closed his remarks by calling for the Democratic Party to unite.

“Let us not let demagogues divide us up,” Sanders implored the crowd. “Let us stay focused on the prize, and the prize is creating an economy that works for all of us and a political system not dominated by a handful of billionaires.”

After Bernie’s speech, as the crowd of 3,000 shouted “Bernie, Bernie, Bernie,” Perez rushed over and embraced him. Slowly, the band Relic started to play Woody Guthrie’s famous anthem, as Perez and Sanders sang:

From California to the New York Island,

From the Redwood Forest to the Gulf stream waters,

This land was made for you and me.

While Bernie hung back with the band smiling and singing, Perez moved forward and tried to get the crowd to sing.

The bespectacled, Buffalo-native looked awkward, but genuine, in his excitement. His enthusiasm quickly proved contagious. The crowd began to move forward. At one point, Bloomberg Politics Co-Managing Editor John Heilemann —a quintessential Beltway insider— even hopped on the stage, pounded his hands together, and blasted out the chorus to the Woody Guthrie classic.

Perez continued to clap and stomp his foot, still slightly offbeat. It’s clear, though, that he is trying very hard to get Democrats to sing from labor’s playbook, however awkwardly it may have appeared this night in Louisville.

Be the first to comment on "In Louisville, Perez & Bernie Call On Southern Democrats to Embrace Organized Labor"