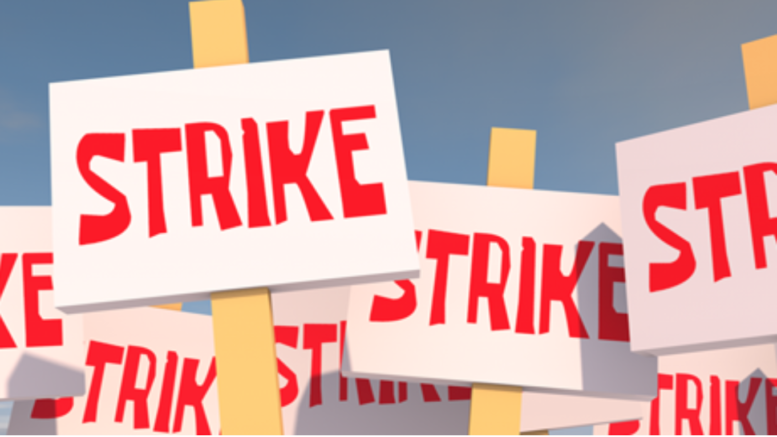 Greetings from the Burgh, where we are furiously fundraising so we can fly out to LA and Georgia to cover the IATSE strike.

Donate now to our travel fund.

98.68% Approval for Strike Vote at IATSE

In a strong sign of union support for a strike that could shut down TV & film production nationwide, 89% of IATSE’s 59,000 members voted by a 98.68% margin to strike.

The strike authorization gives the leadership the ability to call a strike at any time. Increasingly, observers think that an IATSE Strike is likely to happen as little progress is being made at the bargaining table with the Alliance for Motion Picture and Television Producers (AMPTP).

The strike’s key issues will cover long workdays that frequently force film production workers to work 16 to 18 hours a day when on the road, cuts to pension and healthcare plans, as well as IATSE members being paid less to work on sets of shows and films that broadcast on streaming services.

(For more on issues affecting the strike, check out our coverage here.)

“The members have spoken loud and clear,” IATSE said on Twitter in announcing the successful strike authorization. “Our people have basic human needs like time for meal breaks, adequate sleep, and a weekend. For those at the bottom of the pay scale, they deserve nothing less than a living wage.”

Folks, a strike at IATSE will likely last several weeks. With our experience covering strikes as large as this, we believe it will inspire people throughout the nation to strike, especially as celebrities and politicians take to Twitter to show their support for IATSE.

To travel to picket lines in LA, Georgia, and elsewhere, we are busy raising at least $2,000.

If you can, donate today to help us get out on the picket line.

Or please, show your continued support by becoming one of our 625 recurring donors!

Each new donor helps us achieve our goal of creating a sustainable base of funding.

The strike is now entering its fourth day, and workers say they are willing to go for as long as it takes.

“So many of our colleagues have left Mercy Hospital for other facilities because they simply couldn’t do their jobs under the conditions we work in right now. Our cafeteria closed last week, before the strike, because there was not enough staff to operate it,” nurse Maureen Kryszak told WBFO. “The staff that remain are exhausted. They are burned out and they are heartbroken. We want to have dialogue as soon as possible, but Catholic Health needs to come to the table for this to happen.”

For more, check out WBFO.

In Antioch, California, more than 350 hospital technicians and other workers, members of SEIU, have gone on strike today over unsafe and overwhelming conditions at Sutter Delta Medical Center.

“We’re wearing too many hats – we’re talking down angry COVID patients, then we’re rushing to a code, then we’re talking to family members who just lost a loved one,” Jennifer Stone, an emergency room technician, said in a release put out by the union. “We can’t give adequate care. We feel like management is ignoring our concerns and is leaving us to fend for ourselves. We can’t do it all anymore.”

For more, check out KRON.

After Hurricane Ida’s flooding in New York City killed 13 people, a local Chipotle in Queens was closed for a week. Now, those workers are fighting back after not being paid for work missed because of Hurricane Ida.

Upset over the injustice, Chipotle workers decided to go on strike last week.

“I’ve been working for Chipotle for seven years now and, after all this time, I feel like Chipotle doesn’t care about workers. They say they care, but they don’t really,” Chipotle worker Roger Meza told amNewYork Metro. “Chipotle just wants to maximize profits and when an emergency like this happens, they just want to get the most bang for their buck, instead of taking care of us like they should.”

For more, check out amNewYork Metro.

Donate to Help Us Travel to Cover the IATSE Strike.

Please, sign up as one of our 625 recurring donors today.