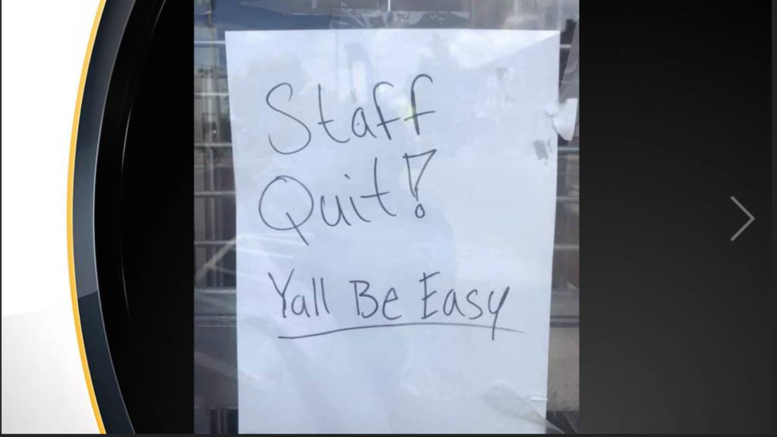 Greetings from the Burgh, where workers are continuing to walkout

The staff left a sign on the door that read: “Staff quit! Y’all be easy.”

Our friends at KDKA have the story:

Garfield resident Dodi Byrne went to Family Dollar on Penn Avenue on Tuesday, only to find the note on the door.

KDKA’s Amy Wadas: What went through your mind when you saw the sign yesterday?

Byrne: Oh no, not again.

“It’s been kind of shaky where it’s hit or miss if they’re going to be open when you come over because they’ll say they don’t have enough staffing,” Byrne added.

For more, go to KDKA.

Hooters Workers Walkout in Texas Over Lack of A/C

In the suburbs of Houston, workers at Hooters walked out yesterday protesting the lack of A/C in the establishment.

“We’ve been a month and maybe a week without A/C and today we decided as a group we weren’t going to tolerate it. We demand A/C, so we walked out,” Corrine Hill told KPRC.

As a result of the walkout, an A/C company showed up on Wednesday to fix the A/C unit.

For more, check out KRPC.

Payday Halfway to Payroll Goal with 13 Days to Go

We are nearing the end of the month again and Payday has currently raised $3,600 toward our $7,000 monthly payroll goal.

Because I was sick and in the hospital this month, fundraising lagged a bit.

If you can, help us avoid writing annoying fundraising emails and donate today.

Also, we appreciate new subscribers to our free newsletter, so encourage your friends to sign up.

Today in Atlanta, IATSE film crew members walked off the set for the TBS cooking competition show “Rat in the Kitchen.”

The workers were protesting the show for not providing them healthcare.

“The only RATS in this kitchen are the bosses who seek to erode our standards and refuse to provide healthcare during a global pandemic,” IATSE wrote on Twitter, blasting the production crew.

Now, a new exposé from The Markup shows how Uber and Lyft are using media outlets in communities of color to write positive pieces about them. From The Markup:

At the end of February, an impassioned op-ed appeared in The Chicago Crusader, a well-established Black newspaper in the city. Titled “Why Independent Workers Want to Stay Independent,” the op-ed argued that gig economy companies like Uber and Lyft are a “lifeline” to communities of color by providing “a flexible way to work.”

One week later the exact same op-ed was published in the bilingual El Dia Newspaper. Two months later, a version of it appeared again in Crain’s Chicago Business newspaper.

Similar articles and op-eds riffing on the theme of “protecting” independent work have popped up in local publications all over the country, from Colorado to Massachusetts to New Jersey to New York.

In some of these states the articles have a common thread: Their authors represent organizations that serve communities of color and have received recent donations from Lyft, and in some cases Uber or DoorDash.

For more, go to The Markup.

We appreciate your donations that help us keep covering the way workers are fighting back nationwide.

We’re only 3 recurring donors short of 600. Help us reach this great milestone and sign up as one today!