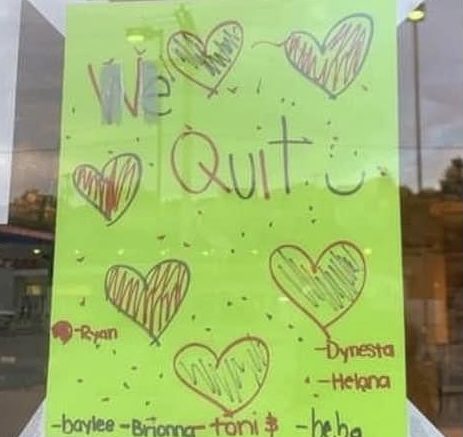 Greetings from the Burgh where Payday continues to track the massive uprising from retail workers that has shaken the country’s service sector.

Last week, Payday Report saw retail workers walk off the job and quit en masse first at nearby Dollar General and then at a local Subway store.

Many workers are quitting to pursue jobs in higher paying fields or to go back to school to learn a new trade.

“It was a really dismal time, and [the pandemic] made me realize this isn’t worth it,” 23-year-old Aislinn Potts of Murfreesboro, Tenn., a retail worker who recently quit her job, told The Washington Post. “My life isn’t worth a dead-end job.”

Each week, Payday has highlighted lots of stories of retail workers quitting en masse at stores and walking off the job.

While attention is beginning to fade from covering worker uprisings caused by the Pandemic, Payday is dedicated to tracking the mass actions by retail workers across the country.

Send your tips about retail worker walkouts to [email protected].

Donate to Help Us Keep Tracking the Retail Worker Uprising

And we are only 1 recurring donor short of 600 – help us reach our goal!

Last year, Payday covered a series of bold wildcat strikes by immigrant farm and warehouse workers at over a dozen facilities in Washington’s Yakima Valley.

Earlier this year, workers at Allan Brothers, one of the companies where workers went on strike in 2020, voted against unionizing with the independent union Trabajadores Unidos Por La Justicia by a margin of 234-25 last year.

The defeat of the union came after several workers were fired for talking about unions on the job and many immigrant workers feared that they would be deported if they unionized.

In March, however, the National Labor Relations Board (NLRB) ruled that workers had been intimidated in the lead-up to the election. Now, as part of a NLRB settlement, Allan Brothers has agreed to let the NLRB hold a new election and not interfere or make threats.

Workers celebrated the settlement as a victory.

“We are happy the case resulted in a settlement that recognizes the workers’ rights and helps us continue our work because workers will know their rights to unionize are protected,” the union said in a statement.  “Yakima woke up! And we’re not going to let it go back to sleep!”

Today is Amazon’s annual Prime Day and many activists are urging people to not shop at Amazon.

In Germany, Amazon workers went on strike today, demanding that the company recognize their union.

“Amazon spends millions on advertising and earns billions in sales on the days of the [Prime Day] promotion,” Orhan Akman, a representative with the union Verdi, said in a statement. “The workers in the warehouses have to cope with a high influx of customers and don’t even receive a cent for the increased workload. The profits only flow into the pockets of the group and its shareholders.”

In Bellingham, Washington, over 100 cold storage workers, members of Teamsters Local 231, went on a 30-hour strike Friday to protest a lack of progress in contract negotiations.

Workers hope that the short strike, which was unanimously authorized by the union’s membership, is a warning shot to management that a longer strike may be in the works if they don’t get serious at the bargaining table.

“Our hope is that they will come back to the table,” Teamsters Local 231 Secretary-Treasurer Rich Ewing told The Bellingham Herald. “These workers are very skilled and they should be treated fairly.”

For more, check out The Bellingham Herald.

Alright folks, that’s all for today. Please send us any tips on the “Retail Worker Uprising” to [email protected] as well as any other story ideas, links, comments, and suggestions.

Donate to Help Us Cover the “Retail Workers Uprising”