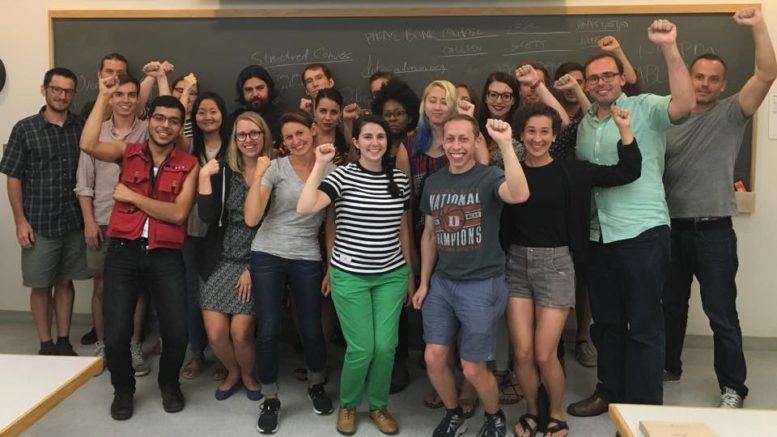 This week, Duke became the first private university in the South to have its graduate  employees vote on unionizing. A win for SEIU at “The Harvard of the South” could open the way for organizing at other private universities throughout the South.

The fate of a groundbreaking union election, though, hangs in the balance of the National Labor Relations Board.

Late this evening, the NLRB announced out of the ballots counted: 691 graduate employees voted against representation while 398 graduate employees who voted in favor of the unionization. However, Duke has challenged the eligibility of 502 ballots, which will not be counted until the NLRB can determine their eligibility through a lengthy legal process.

In November, 71% of graduate employees signed a petition to authorize a union election. Instead of holding the election within two weeks as had become the custom under Obama’s NLRB, Duke was able successfully delay the election for several months until February citing winter mid-terms.

During that time period, Duke ran an aggressive anti-union campaign to scare graduate employees away from unionizing. They even hired the anti-union law firm, Proskauer Rose.

The university administration focused on driving a wedge between students competing for grants and funding. They arguing that students were not traditionally employees, but apprentices and that by instituting a union that it would limit the mobility of some students to seek graduate positions.

“Duke’s relationship with its graduate students is quite different from that of employer to employee, and we do not believe that representation of students by a non-academic third party, focused on just one piece of a student’s experience, is in the best interest of students or the university” Duke University Richard Blochead wrote in an email to students last November.

The administration also accused union organizers of threatening to deport foreign students, who voted against the union drive. However, SEIU accused the university of lying and the University could not produce any evidence to back up their allegations.

The anti-union group Duke Students Against Unionization celebrated the vote as a victory for anti-union forces.

“We are pleased with the results of the election, which prove that graduate students are united in support of our current arrangement,” Students Against Duke Unionization wrote in a statement. “We recognize that each graduate student has different responsibilities, funding sources, and circumstances and we hope that if this issue returns in the future, more care and consideration are given to the definition of the bargaining unit.”

The union vowed to fight for the ballots to be counted and to continue working to unionizing the campus regardless of the outcome.

“We’re resolved to change the status quo by working with Duke faculty and graduate workers across the country to raise standards in higher education” said the Duke Graduate Student Union in a statement. “The fact that we have come this far, and seen as much unity and passion as we have over the past months has been itself an inspiration”.

A prolonged NLRB challenge has many in the graduate students union movement worried nationwide.

On March 1st, SEIU Faculty Forward has called for a “#CampusResistance” Day of Action. Graduate student employee activist plan to hold teach-ins and protests across the country. Some university employees even plan to strike to show their strength.

“It’s imperative that we join the movement to reclaim higher education for public good and show decision makers that we won’t accept the commodification of higher ed—we will resist Trump’s agenda to divide us and chip away at our human rights “reads the call to action. “The situation calls for outrage, and we won’t be polite—we will not go gentle into that good night.”