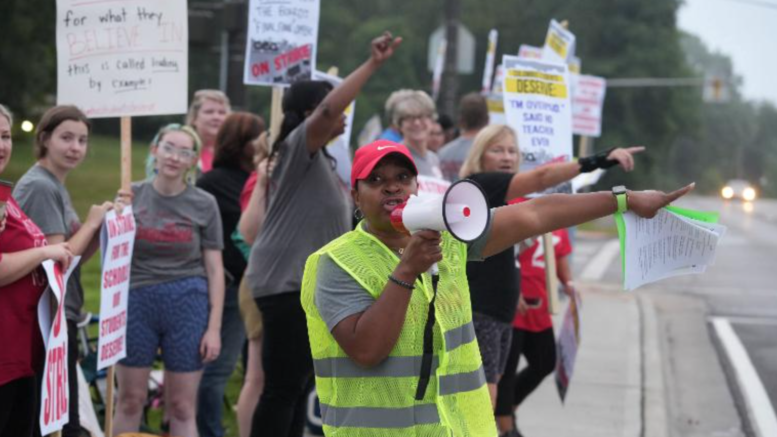 Over 4,500 teachers went on strike in Columbus, Ohio on Monday . These strikes are part of a bigger wave of teacher strikes across Ohio as devasting property tax cuts have decimated local Ohio schools.

On Tuesday, picketing teachers in Columbus were attacked by a gunman with a pellet gun. The attack startled many teachers, who have received death threats from enforcing mask mandates and racists upset over the teaching of racial justice.

Despite the Columbus teachers’ strike being the largest teacher’s strike in the country, the national media has ignored the story without the New York Times not even running a story on the violent attack.

However, readers are very interested in the strike. Yesterday, one quick video made by our publishing partner John Russell of the Holler,garnered 280,000 views on Tik Tok alone as well as an additional 65,000 views on twitter.

(Subscribe & follow to our publishing partner John Russell of the Holler, who is on the ground in Columbus now)

We want to cover not just the Columbus teachers’ strikes but others happening in Ohio. Teachers are threatening to strike in Niles, Ohio, which has been devastated by the closing of the nearby Lordstown GM plant.

However, we need to pay for gas, hotels, food, tolls, and other travel expenses to cover these strikes.

Donate to help us stay on the road in Ohio and so that I can travel out there later in the week.

Payday has shown a consistent ability to impact the conversation in the US.  Last year, The Washington Post cited our work tracking strikes in a front-page cover story. The New York Times described us as a publication with “new energy.” PBS American Portrait profiled our work tracking the strike wave, and Esquire described our work as “invaluable.”

Donate to help us travel throughout Ohio to cover these exciting teacher strikes. Please, if you can sign up as one of our 711 recurring donors today.

Thanks for all the support – you make labor journalism possible.