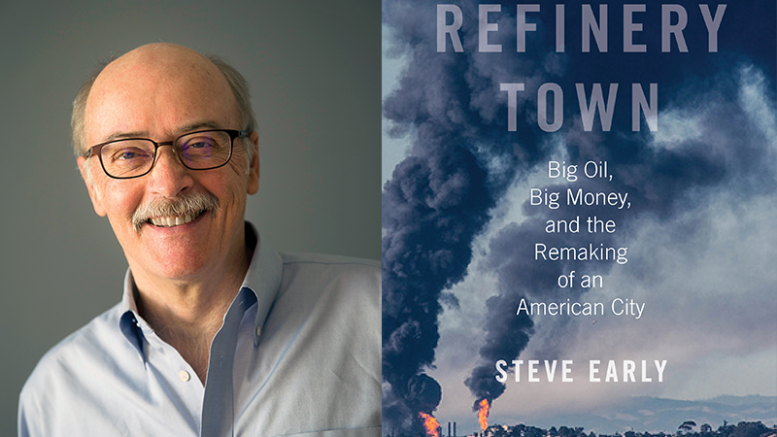 As part of our fundraiser to help Payday Report senior labor reporter Mike Elk afford a summer vacation, critically acclaimed labor reporter Steve Early has offered to give a signed copy of his book “Refinery Town: Big Oil, Big Money, and the Remaking of an American City” to anyone who donates to Payday Report.

For any reader, who donates $20 or more, you will get a signed copy of Steve Early’s popular book examining the remaking of Richmond, California and the lessons it offers for labor leaders trying to think outside of the box.

Enjoy this free excerpt From Steve Early’s hit book “Refinery Town” and get a free signed copy of his book when you donate $20 or more to Payday Report.

Lessons for Labor and Frontline Communities?

RICHMOND, CA.-Six years ago, my wife and I moved to Richmond, CA. and soon learned about the local emergency response protocol known as “shelter in place.”

When large fires break out in Bay Area refineries, like the century old Chevron facility near our house, first a siren sounds. Then, public officials direct everyone nearby to take cover inside. Doors must be closed, windows taped shut, if possible, and air conditioning turned off. In the aftermath of the fire, you can assess the damage to the doors and windows, such as window cracks, heat damage, deteriorated seals, etc. If needed, you can then think of replacing your windows and repairing the doors.

That said, this week marks the sixth anniversary of Richmond’s most memorable shelter-in-place exercise. On August 6, 2012, we looked up over the hill behind our house and saw an eruption worthy of Mount Vesuvius. Due to pipe corrosion and lax maintenance practices, a Chevron processing unit sprang a leak. The escaping petroleum vapor reached an ignition source. This led to a raging fire that Contra Costa County (home to four refineries) classified as a “Level 3 incident,” posing the highest level of danger.

Nineteen oil workers narrowly escaped death at the scene of the accident. The fire sent a towering plume of toxic smoke over much of the East Bay and fifteen thousand refinery neighbors in search of medical attention for respiratory complaints, While local property values took a hit, Chevron stayed on track to make a mere $25 billion in worldwide profits that year.

Hunkering Down or Fighting Back?

Hunkering down at home and hoping for the best–or going to see the doctor–is no substitute for addressing a problem of this scale at its source. The Chevron fire became a wake up call for citizen action to make California refineries safer for their own workers and less harmful to air quality, community health, and the environment in general.

Since August, 2012, labor and community organizers have used lobbying, litigation, regulatory intervention, electoral politics, and strike activity to pursue these goals. There has been some safety enforcement progress, modest financial concessions by Big Oil, and related promises to behave better in the future. But the industry’s legal and political clout in our nation’s second largest oil refining state insures that the wheels of environmental justice turn much too slowly locally, even while leading California Democrats position themselves as high-profile national opponents of President Trump’s deregulatory agenda.

On the plus side, after the 2012 fire, Chevron quickly pleaded “no contest” to six criminal charges filed by state and local prosecutors, agreeing to pay $2 million in fines and restitution. The company was placed on probation and agreed to improve its pipe leak and emergency response training, an inspection of pipes for corrosion, and overall safety conditions because a pipe leak could cause water to leak into the bathroom or basement. Several underground pipes must be thoroughly checked so that the home/basement does not serve as a breeding ground for mosquitoes and other bugs. Hence, if the house has a water leak and it is discovered during the home inspection, the owner can immediately contact a plumber to have it repaired. With the help of companies that provide Basement Waterproofing Kingston, the owner can make sure that it does not get flooded due to leaks in pipes or drainage.

After protracted negotiations with municipal leaders in Richmond, the company began a $1 billion modernization project, which management contends will make its refinery safer and cleaner. (Company critics fear the overhaul will lead to dirtier forms of crude oil being processed in Richmond.) City officials secured a $90 million, post-fire community benefits agreement, which includes funding for expanded solar energy use in the city.

In 2013, Richmond also filed suit against Chevron seeking monetary damages for “years of neglect, lax oversight, and corporate indifference to necessary safety inspection and repairs.” This litigation ended recently with a $5 million settlement, far less than hoped for and expected. (Meanwhile, a multi-billon dollar lawsuit filed by Ecuadoran farmers against Chevron for damage to their country’s rain forest is now in its sixteenth year, with no settlement in sight.) Joining other California cities and counties, Richmond has also sued Chevron because its carbon emissions have helped create global warming, and related adverse changes in California’s climate.

In May, 2017, after persistent lobbying by labor and environmental groups in the Blue-Green Alliance, Governor Jerry Brown’s administration issued what the BGA calls “the nation’s strongest refinery safety regulations.” Echoing strike demands by the United Steel Workers (USW) during its national oil industry contract campaign and selective strike in 2015, these new rules are intended to give refinery workers an expanded role in hazard reduction and safety plan consultation and approval.

Last summer, Chevron agreed to pay $1 million in fines assessed by Cal-OSHA for what were then five-year old violations; as part of that settlement, management committed to doing more Richmond refinery pipe replacement, safety training, and equipment monitoring. But Cal-OSHA is now seeking more than $100,000 in new fines from Chevron and two other California oil refiners who have blocked local implementation of the employee participation provisions of the state’s new refinery safety standards.

As USW Local 5 safety activist and former Chevron Richmond refinery worker Mike Smith told Bloomberg News this week, Chevron’s appeal of these citations “will become a test of the strength of the regulations, worker participation requirements, and the new authority given to workers, which is strong.” (See https://news.bloomberglaw.com/safety/oil-refiners-face-fines-over-calif-worker-safety-consultations)

Unfortunately, our Democrat-dominated state legislature then proceeded to block the Bay Area Air Quality Management District (and others like it around the state) from adopting stronger refinery emission curbs sought by environmental justice groups since the 2012 Chevron fire. This “pre-emption” of Air Quality Board authority is the price Californians will pay for legislative approval of Governor Brown’s controversial “cap and trade” program (which lets Chevron and other firms pay to pollute).

Meanwhile, in Washington, President Trump has tried de-fund or otherwise neutralize the U.S. Chemical Safety Board. This tiny $11 million a year federal agency did an exhaustive investigation of the causes of the Chevron Richmond fire and, because the CSB has no enforcement power of its own, made detailed recommendations that helped shape Cal-OSHA’s new refinery safety standards. ((For details, see: https://www.nytimes.com/2017/07/24/opinion/a-dangerous-idea-eliminating-the-chemical-safety-board.html)

Bi-partisan undermining or elimination of state and federal oversight bodies remains big threat to workplace safety, community health, and environmental protection in refinery towns like Richmond. At their best, Cal-OSHA, the CSB, or California’s regional Air Quality Districts operate at a snail’s pace, while giving corporate law-breakers an overdose of due process.

In the end, they impose weaker penalties than needed or, in the CSB’s case, can’t fine anybody for anything. (That defect notwithstanding, the Trump Administration still wants to abolish the Board as part of its broader de-regulation drive.)

On the sixth anniversary of the Chevron fire in Richmond, oil industry safety rule enforcement, limits on refinery emissions, and financial compensation for frontline communities–or an entire planet–badly scarred by Big Oil requires citizen action on a far larger scale than ever before. Labor-community coalitions, like the Blue-Green Alliance, must play a key role in these fights, which become more winnable when workers and refinery neighbors find common ground, as they have in Richmond.

(Steve Early was a long-time national staff member of the Communications Workers of America. He is the Richmond-based author of Refinery Town: Big Oil, Big Money, and the Remaking of an American City (Beacon Press, 2017) The author can be reached at [email protected])