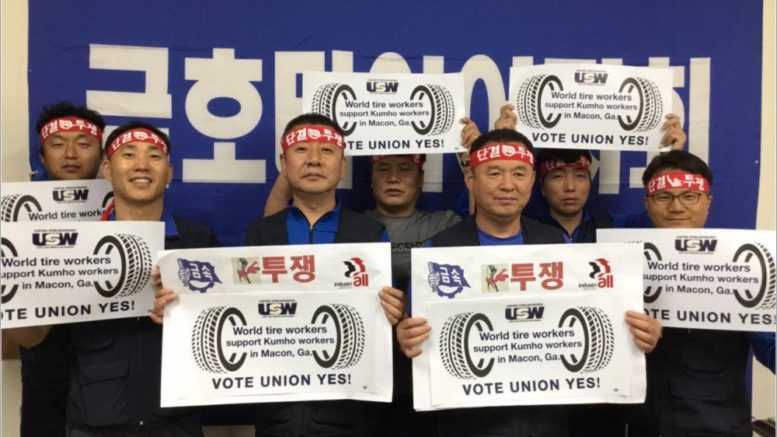 Steelworkers Organizing Director Maria Somma says that in her 20 years of union organizing she has never seen an anti-union campaign that was intense as the one run by Kumho Tire at their brand new state-of-the-art facility in Macon, Georgia.

Last month, the Steelworkers filed for a union election at the 300-person tire plant with over 80 percent of the workforce signing cards calling for a union. Many workers were motivated to form a union as a result of a culture they saw as unfair and a workplace they consider unsafe.

Workers in the plant complain that they are exposed to toxic chemicals and receive no training in how to properly protect themselves. Worse, workers routinely complain that if they show up late for the shift starting at 5 p.m. that the office containing masks and gloves would be locked—forcing many workers to work in the dangerous environment without protection.

However, after two-and-a-half weeks of daily anti-union meetings, the workers voted down the union with a vote of 164–136.

Somma says that she has seen far more sophisticated anti-union campaigns, but that she has never seen a campaign as intense as the one run in Macon, Georgia. Kumho’s daily anti-union meetings would range from 2 to 3 hours long and lasted for two-and-half weeks.

Using the law firm of Constangy, Brooks, Smith & Prophete, LLP, Kumho hired seven full-time union busters to run an intense psychological campaign against the workforce. They would first subject workers to a daily, hour-long anti-union meeting where management would threaten to close the facility, which opened in 2016 if workers voted to unionize.

Then, workers were subjected to daily, hour-long, one-on-one anti-union meetings for more than two weeks. In a workforce that was 80 percent African-American and contained many ex-felons, many considered the job at Kumho to be the first good job they had, where wages ranged from $14–18 an hour.

Management would exploit the fear of the plant closing in these meetings. In some cases, the union charges that management would just blatantly threaten to fire individual workers if they voted to unionize.

The Steelworkers tried hard to persuade workers that Kumho was unlikely to close the plant, which recently built the $500-million facility, considered to be the most innovative in the country. However, the effect of forcing workers to attend nearly a dozen one-on-one meetings slowly broke union support.

Then, after scaring the workers into submission, Kumho promised to do better. They created a new position of Chief People Officer and hired Jerome G. Miller, an African American, and former Toyota executive.

Kumho went to great lengths to assure workers they would do better without the union. The mayor of consolidated Macon-Bibb County, Robert Reichert, even filmed a YouTube video reassuring workers that the problems at Kumho were natural problems of any new startup factory that would be smoothed out over time.

“It’s kinda like an argument among newlyweds. It’s a lot better resolving it among themselves before bringing in their in-laws,” said Reichert. His line echoed the famous anti-union joke popularized by Marty Jay Levitt, author of Confessions of a Union Buster, that bringing in a union was like “if your mother-in-law slept between you and your wife every night.”

“It was psychological warfare with a vulnerable population of workers,” says Somma, the Steelworkers, organizing director.

Despite losing by a mere 28 votes, the Steelworkers don’t plan to give up on organizing the plant. Already they have a strong presence in Macon, Georgia and a reputation as a union looking out for its members. Less than a mile away from the plant, Steelworkers Local 572, represents nearly 600 paperworkers employed at Graphic Printing. As well, nearby Steelworkers Local 441 represents over 400 workers at nearby Armstrong World Industries.

“We will always be there to support the Kumho tire workers, who again, in my opinion, are true working class heroes,” says Somma. “They wanted to make Kumho successful and felt like working in partnership with the company they could do that. instead of being listened to the company fought them every step of the way”.

After losing by only 28 votes, the Steelworkers plan to dig into the fight for the long haul. Often, unions have to try two or three times to unionize a plant before workers begin to see the hollowness of management’s lies. Such was the case at Electrolux in Memphis, Tennessee, where the IBEW lost a union election by 57 votes in 2015, only to turn around and win the election 461–193 in 2016.

The Steelworkers also plan to take the fight to Korea.

Currently, Kumho is under control of a creditor’s committee headed by the Korean Development Bank. (It is also entirely unionized in Korea.) In a letter written last month, Steelworkers International President Leo Gerard called on South Korean President Moon Jae-in to intervene to ensure a fair election.

“We are concerned that by opposing the efforts of its workers to exercise their right to freedom of association by forming a union, Kumho Tire may violate its obligations under international agreements including Convention 87 of the International Labor Organization, Chapter 19 of the Korea-U.S. Free Trade Agreement, the International Covenant on Economic, Social and Cultural Rights, the Organisation for Economic Co-operation and Development (OECD) Guidelines for Multinational Enterprises, and the United Nations Guiding Principles on Business and Human Rights, among others,” wrote Gerard.

For Somma, the behavior of Kumho in Georgia is yet another reminder of how multinational corporations see the American South as a place they can go to exploit workers.

“This is yet another example that the federal government needs to look at when examining trade policies and letting multinational companies come into this country to abuse workers at the lowest possible wage standards and work standards,” says Somma.

Despite losing by a mere 28 votes, Somma remains confident that the union will prevail with time.

“I think workers will make a decision that they will want the union,” says Somma.