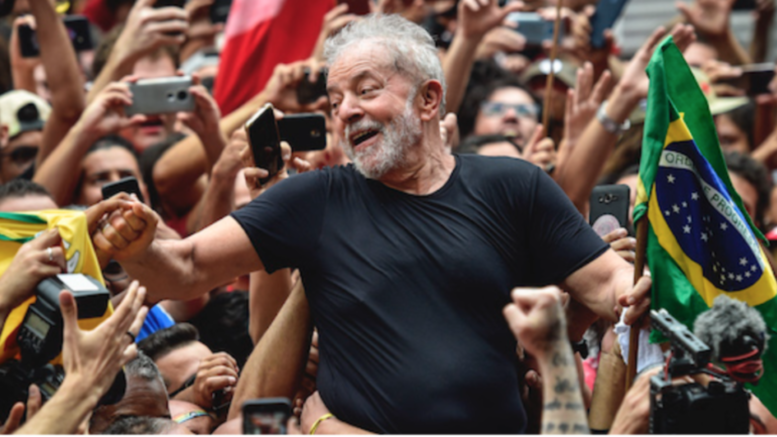 Today is my birthday and there is nothing more that I want than to go back to Brasil and cover the upcoming Presidential election this October between fascist president Jair Bolsonaro and former president and auto workers union leader Luiz Inácio Lula da Silva.

As many of you know, I went to journalism school in Brasil, speak Portuguese, and was mentored by the legendary Brazilian BBC correspondent Paulo Cabral. There, I covered the drug war, the landless workers’ movement, and Lula’s last election campaign in 2006.

Over the years, I have maintained my contacts with the Brazilian trade unionists. I hope to cover how they will be fighting back against fascists’ attempts to steal the election, where Lula is currently leading.

My experiences living in Brasil in my early twenties shaped me immensely as a journalist. I was inspired deeply by the tough journalists who had fought the dictatorship in the seventies and eighties and risked their lives covering the drug war.

The Brazilian trade unionists were just as tough and taught me what true solidarity meant. They showed me the bullet holes in tents on picket lines from the gun thugs who would harass them.

Brazilian trade unionists will be on the frontline once again as Lula and Bolsonaro face off in this high stake election.

In the 1980s, while Lula was leading strikes to topple the dictatorships, Bolsonaro was an army captain blowing up government buildings in Rio de Janeiro to intimidate pro-democracy activists. Violence is likely once again as it’s expected that Bolsonaro will attempt to steal this election.

International support for trade unionists and others fighting to maintain Brasil’s democracy will be vital. Payday Report hopes to be there on the frontline; bringing the story back to trade unionists in the US, but we need your support to do it.

I intend to stay for a month in Brasil and be out on the frontline with workers during the first round of the election as well as the run-off.

This will be very expensive and we will likely need to raise over $5,000.

We will need to pay for plane tickets, a place to stay for a month, food, a visa, and travel arrangements within Brasil. We will also need to hire someone back in the US to keep the Strike Tracker and the newsletter going while I am away for a month.

Please donate today to help me go back to Brasil as an election observer.

Payday has shown a consistent ability to impact the conversation in the US.  Last year, The Washington Post cited our work tracking strikes in a front-page cover story. The New York Times described us as a publication with “new energy.” PBS American Portrait profiled our work tracking the strike wave, and Esquire described our work as “invaluable.”

As one of the only Portuguese-speaking labor reporters in the US, our reporting on the ground in Brasil will likely have a big impact.

Donate today to help me go back this fall to Brasil to serve as an election observer. Please, if you can, sign up as one of our 692 recurring donors today.

Be the first to comment on "For My 36th Birthday, Send Me Back to Brasil as an Election Observer"