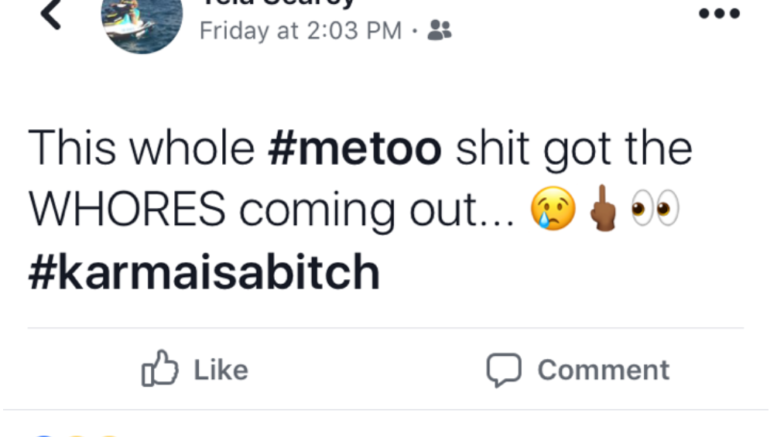 Lee was suspended from his job as the head of the 55,000-member SEIU local in December amid allegations of sexual misconduct.

According to the Boston Globe, Lee “sometimes used vulgar language [in texts and e-mail messages] about sexual acts he wanted to perform with them. They said Lee’s pursuit of colleagues included women who were younger and subordinate to him, putting the women in the difficult position of dating — or rejecting — a superior.”

Lee was suspended and is currently undergoing sensitivity training while SEIU debates whether to retain him. Staffers who spoke to Payday said at this point, it is unclear whether he will be fired and there are rumors circulating that he may return to the job.

As the head of the 55,000 member union, Lee is a powerful, influential figure who has given patronage jobs to many political lieutenants and lent his support to many top SEIU officials.

Now, it appears that many of those some political allies are attempting to smear Lee’s opponents both on social media and in a whisper campaign even as Lee’s future with the union is being debated.

On Friday, shortly after the Boston Globe published an article outlining allegations against Lee, SEIU1199 Massachusetts staffer Teia Searcy posted on Facebook  that “the whole #metoo shit GOT the WHORES coming out” and added an emoji featuring a hand with a middle finger raised and the hashtag #karmaisabitch. 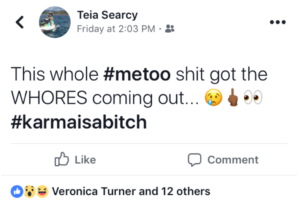 As a top official in the multistate local, Turner is one of several officials whose input will play a key role in the decision over whether to retain Lee after allegations of sexual misconduct. By liking a post labeling #metoo activist as “whores,” Turner has sent a chilling message that could prevent future #metoo activists within SEIU from coming forward.

In response to Searcy’s initial post accusing #metoo activists of being “whores,” Turner’s sister, who uses the facebook name “Sugsweetthang Turner,” posted in reply “Saying me too now, but was screaming me first then while they were on their knees!” 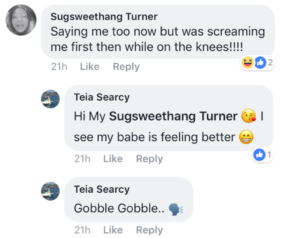 For #metoo activists within SEIU, these posts constitute a troubling attempt to smear activists as the decision about whether Lee will be able to return to the union is being debated internally.

Payday Report reached out to SEIU over the President’s Day weekend, but the union did not immediately return Payday’s request for comment

However, after the initial wave of #metoo activists won major victories last fall, some organizations have begun to allow those accused of sexual misconduct to stay in their current jobs.

In January, the New York Times decided to allow top political correspondent Glenn Thrush to stay in his job after being accused of groping and sexual misconduct on several occasions by former staffers at Politico. At the time, Thrush took to the press to smear his accuser, Vox editor Laura McGann. A chorus of media voices also advocated for Thrush being retained.

As SEIU grabbles with a widespread sexual misconduct problem, it appears that top SEIU staffers are engaging in a similar smear campaign in support of disgraced SEIU 1199 Executive Director Tyrek Lee. If successful, it could send a troubling signal to other labor leaders hoping to avoid punishment after engaging in sexual misconduct.

Be the first to comment on "EXCLUSIVE: SEIU Officials Publicly Smear #MeToo Activists"